Four-Story House of MinaLima to Open in London’s Soho

We learned last month that London’s current House of MinaLima would be relocating to a townhouse in historic Soho, and the time is almost here! It was announced today that MinaLima has turned a four-story townhouse at 157 Wardour Street into an amazing House of MinaLima. 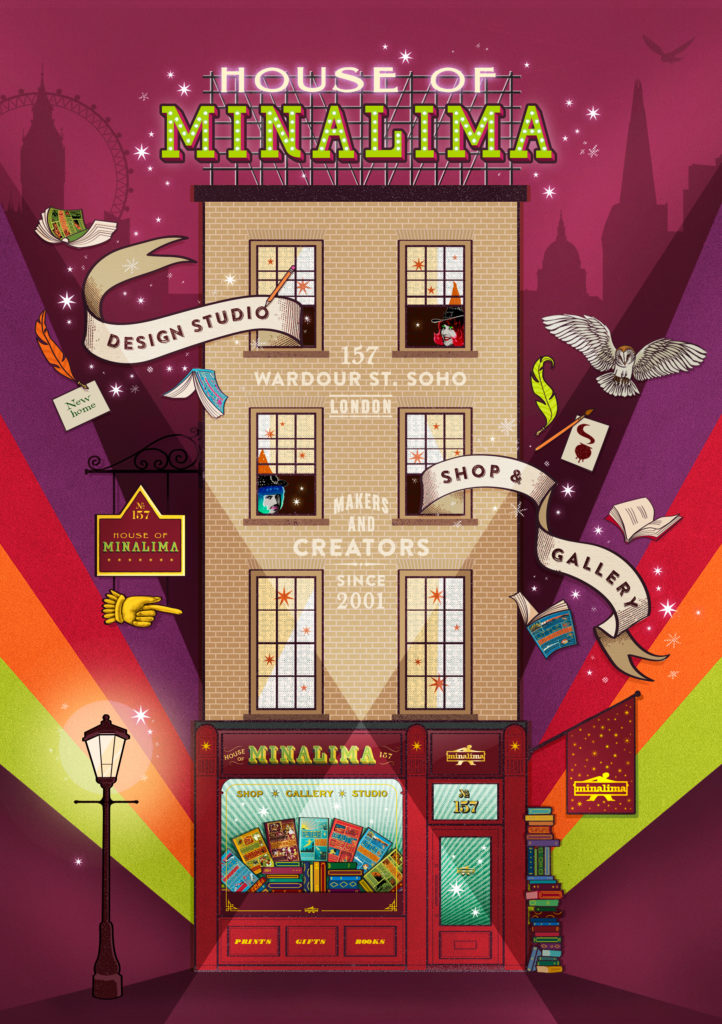 Fans have loved visiting the Greek Street gallery-shop for the past four years, and now they’ll be able to enjoy even more MinaLima magic the next time they head to London. The Soho location will be a “flagship HQ” for designers Miraphora Mina and Eduardo Lima, housing their gallery, theatrical shop, and design studio.

Visitors will love the amazing displays of Harry Potter and Fantastic Beasts designs available at the Wardour Street location. The shop is set to open on Tuesday, September 1, just in time for those looking for something special for their trip back to Hogwarts. Visit minalima.com to learn more about the historic location, which used to be the shop of violin-maker Monsieur Georges Chanot III, and when you can visit the flagship headquarters.

Following four successful years and over one million visitors at the Greek Street gallery-shop, MinaLima has transformed an entire four-storey townhouse on 157 Wardour Street – also in the heart of Soho – into a brand[-]new House of MinaLima.

As a flagship HQ for MinaLima founders Miraphora Mina and Eduardo Lima, the building will be home to their immersive gallery and theatrical shop as well as MinaLima’s design studio – uniting the many facets of the design duo’s creativity under one roof.

As serendipity would have it, 157 Wardour Street is an important historical landmark, and one imbued with creative enterprise. Now a celebrated creative quarter, over a hundred years ago, Soho was known as the violin-making centre of the British Isles, and Soho’s Wardour Street was its headquarters. A vivid reminder of this illustrious past is No. 157, the former shop of noted violin-maker Monsieur Georges Chanot III, and now home to MinaLima.

House of MinaLima will showcase Miraphora and Eduardo’s nineteen years of creative and award-winning collaboration in graphic design. The ground and lower-ground floors boast a spectacle of visual surprises: distinctive designs are on display and available to purchase, from MinaLima’s work on both the Harry Potter™ and Fantastic Beasts™ film series to their interactive MinaLima Classics book series and illustrated Collective Nouns.

As the designers of the Marauder’s Map, the Daily Prophet and every other graphic prop in the film series, Miraphora and Eduardo have an exceptional and passionate understanding of the Wizarding World films. Each piece of artwork was originally designed on the film set at Leavesden Film Studios. With the designs being an integral part of the storytelling, MinaLima’s attention to detail is paramount in their work. Much historical research and experimentation with techniques was employed, from finding the perfect ageing effects to scanning old typefaces and peculiar surfaces to enrich their visual reference library.

Authentic film props are on display, kindly on loan from Warner Bros. Studio Tour London – [T]he Making of Harry Potter, allowing visitors to immerse themselves in the visual worlds of Harry Potter and Fantastic Beasts by examining details of the artworks as they were originally created for the films.

MinaLima Classics, a growing collection of children’s stories, which have been enjoyed by many generations and remain some of the most beloved tales in literature, are completely reimagined by MinaLima from the outside to the pages within.

In the distinctive MinaLima style, the opulent hardcovers of the deluxe editions are debossed and gold foiled, encasing the delightfully redrawn stories. In addition to the vivid illustrations on almost every page, interactive elements throughout each book create an immersive experience for the readers, allowing them to truly become part of literature’s most treasured characters.

Each title – Peter Pan, The Jungle Book, The Beauty & The Beast, The Little Mermaid, The Secret Garden, Alice’s Adventures in Wonderland & Through The Looking-Glass, The Adventures of Pinocchio, and the upcoming The Wonderful Wizard of Oz – is complemented by a collection of limited[-]edition art prints featuring artwork from the book, available exclusively at House of MinaLima and MinaLima.com.

From A Charm of Finches to A Murder of Crows, MinaLima’s illustrated Collective Noun prints celebrate one of the joyful eccentricities of the English language through an explosion of colour and humour.

Visitors to House of MinaLima will discover much more than a gallery and shop; this enchanting building and the wonders within will offer a truly immersive experience. For any Harry Potter fan or graphic art enthusiast, it’s a must on their destination wish list!