Ginny Weasley Is the Ultimate Sister

The Harry Potter series doesn’t focus heavily on sisterly bonds. Some of the main sister relationships we see are permanently stuck with the status of “it’s complicated,” such as Lily and Petunia or the Black sisters: Andromeda, Narcissa, and Bellatrix. Part of the reason is that our protagonist, Harry, is an only child, and his family relationships are built through friendship and mentorship rather than blood relations. However, the role of the sister still makes an important and compelling presence in the character of Ginny Weasley. 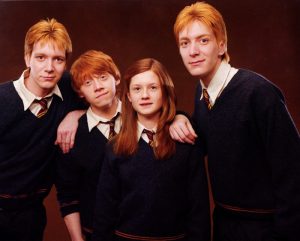 The Weasleys are perhaps the best example of a family that we see in the Harry Potter series. Fun, loud, and (mostly) supportive and loyal, the Weasleys give us and Harry a look at how important these family bonds can be. And Ginny, despite being the only daughter in a family packed with boys, slips easily into this dynamic – she’s fun, determined, and incredibly loyal; woe to anyone who gets on her bad side! Being the youngest, Ginny certainly picks up many traits from her family – from her scowl reminiscent of Molly Weasley to her adventurous attitude that is entirely reminiscent of Fred and George. However, that’s not to say that Ginny is simply “another Weasley”; we see Ginny take these traits and make them entirely her own.

‘Come on, Ginny’s not bad,’ said George fairly, sitting down next to Fred. ‘Actually, I dunno how she got so good, seeing how we never let her play with us….’
‘She’s been breaking into your broom shed in the garden since the age of six and taking each of your brooms out in turn when you weren’t looking,’ said Hermione from behind her tottering pile of Ancient Rune books.
‘Oh,’ said George, looking mildly impressed. ‘Well, that’d explain it.’” (OotP 573-4)

Not all of Ginny’s family relationships are easy. When it comes to new additions to the family – most notably Fleur Delacour – we see Ginny struggling to accept the changing dynamic of this family. Perhaps she felt fiercely protective of her brother or else a little jealous of the lessened attention from her cool oldest brother. Either way, in this relationship between Ginny and Phlegm, we see a relationship that starts with backhanded teasing and simmering tension that can spark up even in the closest of sister-sister relationships. The key here is that Ginny comes to accept her future sister-in-law when Fleur proves she’s just as loyal to Bill as Ginny herself is to her family. 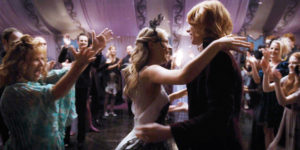 If Harry Potter teaches us anything about the idea of family, it’s that created family bonds can be just as strong as those between blood relatives. The relationship between Hermione and Ginny is not particularly highlighted; however, the rare glimpses we see prove how close these two are. From keeping each other’s secrets – as we see when Ginny refuses to divulge who Hermione is attending the Yule Ball with – to helping each other through various relationships, these two rely on each other like sisters.

Another relationship that is clearly very strong yet often overlooked is that between Ginny and Luna. We see Ginny standing up for Luna and later working closely with her and Neville in order to lead Dumbledore’s Army during Snape’s stint as Headmaster during Harry Potter and the Deathly Hallows. 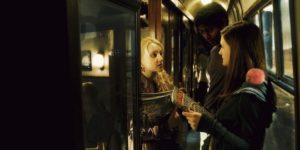 To me, Ginny is the ultimate sister figure of the Harry Potter series. Ginny is both daring and loyal and embodies the great Weasley qualities while still being entirely herself. And perhaps I am biased since I see a lot of Ginny in my own red-haired sister – her bubbly and fun personality and her determination to speak her mind and make her own path. Maybe that’s just the beauty of Ginny’s character, that in her we can all see our own sister relationships, whether we’re bound by blood or unbreakable friendship. If we need it, we know our sisters will be there with a Bat-Bogey Hex ready for anyone who tries to cross us.