Handfasting in “The Cuckoo’s Calling” and “Harry Potter”: A Discovery of a Walt Whitman Poem?

The Cuckoo’s Calling is Robert Galbraith/J.K. Rowling’s most poetry-saturated work. Rowling has said that poetry is something she aspires to appreciate more deeply while acknowledging that her first love is prose: “On the subject of literary genres, I’ve always felt that my response to poetry is inadequate. I’d love to be the kind of person that drifts off into the garden with a slim volume of Elizabethan verse or a sheaf of haikus, but my passion is story. Every now and then I read a poem that does touch something in me, but I never turn to poetry for solace or pleasure in the way that I throw myself into prose.” The Cuckoo’s Calling – whose title is a quotation from a Christina Rosetti poem – marks a new depth of engagement with poetry in Rowling’s work. She bookends the novel with two poems – each of which I have discussed in detail previously (here and here). In addition, each of the seven sections of the novel has a Latin epigraph, which is predominantly poetic (two from Virgil’s Aeneid, one from Virgil’s Georgics, and one from Horace’s Odes). These poetic epigraphs, along with her new hero’s passion for Catullus, mark out the Strike series as more poetically engaged than Harry Potter. Indeed, Rowling’s Faerie Queene Twitter header for Troubled Blood makes me hope that she is exploring the side of herself that loves the idea of drifting out into the garden with some Elizabethan sonnets tucked under her arm.

But there is also a poem which I suspect is nestling within The Cuckoo’s Calling that I did not notice when writing my 2017 posts on the book. And this is because it was only in 2018 that I discovered it to be one of her favorite poems. This poem is Walt Whitman’s “Of the Terrible Doubt of Appearances” (from his Leaves of Grass), and it was reported in 2009 to be Rowling’s favorite poem. John Granger wrote insightfully about Rowling’s appreciation of this poem – which had certainly passed under my radar – in 2018. However, when John and I tracked down the original volume for which Rowling had chosen the poem1 – a charitable collection in aid of War Child: Poems for Refugees ed. Pippa Haywood (London: Vintage, 2002) – it turned out that Rowling had not called the poem her favorite. She had simply chosen it when asked for a poem to contribute. Nonetheless, it must be a poem with which she feels a connection and may well be her favorite Whitman poem. And re-reading The Cuckoo’s Calling this week, I realized that “Of the Terrible Doubt of Appearances” fits perfectly as the (unnamed) Whitman poem Lula Landry recites at her commitment ceremony with Evan Duffield.

Ciara Porter describes the ceremony as “beyond romantic,” and it is clearly intended by Evan as an idiosyncratic version of a handfasting ceremony with bangles exchanged instead of rings and poems exchanged instead of vows. Evan produces matching silver bangles, and Ciara describes how “and then he recited this poem he’d written to her, and put the bangle on her wrist. Looly was laughing her head off, but then she just, like, recited a poem she knows back to him. Walt Whitman. It was […] honestly, like, so impressive, just to have the perfect poem to say, just like that“ (Cuckoo’s Calling 320). Whitman’s “Of the Terrible Doubt of Appearances” – one of the only poems which Rowling has drawn attention to as one of her favorites – fits Ciara’s description of a Whitman poem that was “perfect” for this occasion. It is just the right length to be plausible but impressive, to know off by heart, and – fittingly for a quasi-marriage ceremony – centers on the action of holding hands:

Of the terrible doubt of appearances,
Of the uncertainty after all – that we may be deluded,
That may-be reliance and hope are but speculations
after all,
That may-be identity beyond the grave is a beautiful
fable only,
May-be the things I perceive – the animals, plants, men,
hills, shining and flowing waters,
The skies of day and night – colors, densities, forms –
May-be these are, (as doubtless they are,) only
apparitions, and the real something has yet to be
known;
(How often they dart out of themselves, as if to con-
found me and mock me!
How often I think neither I know, nor any man knows,
aught of them;)
May-be seeming to me what they are, (as doubtless
they indeed but seem,) as from my present point
of view – And might prove, (as of course they
would,) naught of what they appear, or naught
anyhow, from entirely changed points of view;
– To me, these, and the like of these, are curiously
Answer’d by my lovers, my dear friends;
When he whom I love travels with me, or sits a long
while holding me by the hand,
When the subtle air, the impalpable, the sense that
words and reason hold not, surround us and
pervade us,
Then I am charged with untold and untellable wisdom
– I am silent – I require nothing further,
I cannot answer the question of appearances, or that
of identity beyond the grave;
But I walk or sit indifferent – I am satisfied,
He ahold of my hand has completely satisfied me.

The existential angst of the opening half of the poem speaks to the Lula the reader has been presented with by all of her family and friends so far – suspicious of the superficial veneer of her superstar life, mentally unwell, and possibly suicidal. But the confident, affectionate ending speaks to the real Lula we discover as the novel progresses: loving towards her true friends and delighting in the new connections she has discovered.

“Of the Terrible Doubt of Appearances” has a highly unusual form. It uses the traditional poetic technique of anaphora (beginning successive lines with the same word or phrase), but whereas anaphora is usually used for one extended passage (see, for example, Shakespeare’s Sonnet 66), Whitman’s poem uses anaphora in pairs: “Of the/Of the,” “That may-be/That may-be,” “May-be/May-be,” “How often/How often,” “When/When.” Paired initial anaphora is very rare, and it works like a reversed couplet, gathering the poem into front-loaded pairings, a new form of couplet in which the lines are connected at the beginning instead of – as in almost every other poem – at the end of the line. This is a stark inversion of convention: This is a pairing but not as we know it.

As Christopher Ricks succinctly puts it, “It is characteristic of art to find energy and delight in an enacting of that which it is saying.”2 And the quirky pairing of these lines works with the unconventional pairing which Whitman is envisaging. The male pronoun of the friend at the end of the poem is not chance, and Whitman’s sexuality makes him peculiarly aware of the different and less traditional ways in which people can be joined in love. The deeply loving satisfaction of the final lines makes this the perfect poem for a ceremony of love, but the love it celebrates also fits with the unconventionality of Lula and Evan’s union.

When he whom I love travels with me, or sits a long
while holding me by the hand…
Then I am charged with untold and untellable wisdom
– I am silent – I require nothing further,
I cannot answer the question of appearances, or that
of identity beyond the grave;
But I walk or sit indifferent – I am satisfied,
He ahold of my hand has completely satisfied me.

The love this poem celebrates is encapsulated – captured and embodied – through the act of holding hands. Whitman’s poem is one in which the act of hand-holding is of such comprehensive, such all-satisfying love that it banishes all existential dread. And this makes it the “perfect poem” for Evan and Lula’s commitment ceremony: a modern ritual based on the old ceremony of handfasting. Handfasting, which stood somewhere between a betrothal and a common-law marriage, was frequent in the 16th and 17th centuries. Records show that handfasting typically involved the joining of hands, the swearing of oaths, kissing, and the exchange of rings. Handfastings were particularly common in Scotland where the custom of probationary marriages for a year and day persisted into the 18th century. In Walter Scott’s Monastry (1820), he describes how “when we are handfasted, as we term it, we are man and wife for a year and day – that space gone by, each may chuse another mate, or, at their pleasure, may call the priest to marry them for life – and this we call handfasting.” (The importance of handfasting in Scotland is suggestive, given how much Scotland and Scottish culture has inspired Rowling.) Handfasting remains popular in modern-day, particularly in Wiccan and Pagan marriages as well as in more secular contexts (like the commitment ceremony in The Cuckoo’s Calling). But thinking about handfasting with reference to Lula and Evan’s commitment ceremony, however, also made me realize that a very different type of “commitment ceremony” in Harry Potter also appears to have been based on a handfasting ceremony: making an Unbreakable Vow. 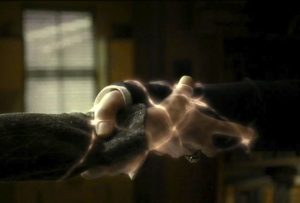 The Unbreakable Vow is a magical, binding promise between witches and wizards, which makes handfasting – a form of Wiccan marriage – a highly suitable source for it. And the vow which we see Snape take – while taking Narcissa’s right hand in his right and with their hands bound by three magical cords created by Bellatrix (their “Bonder”) – fits perfectly with modern handfasting rites. In modern handfasting ceremonies, the couple takes their right hand in the right to make their vow and have an officiant (like the “Bonder”) who generally uses three cords. Each time Snape utters the marital sounding words “I will” (a modern version of the more familiar “I do”), a tongue of flame binds their hands until the third and final tongue of flame “twisted with the others, and bound itself thickly around their clasped hands, like a rope” (HBP 37). The ropes of a modern handfasting are often, likewise, triple (remembering “a threefold cord is not quickly broken” [Ecclesiastes 4:12]) and often red, symbolizing the fire that becomes literal in the magical version. Snape and Narcissa’s Unbreakable Vow binds them together for life, a magical version of a handfasting.

1With the generous help of Jessica Adams, who was one of the editors of Kids’ Night in 3 (2009) in which Rowling’s choice of the poem was reprinted.
2Christopher Ricks, Allusion to the Poets (Oxford: Oxford University Press, 2002), 9.