“Harry Potter: A History of Magic” Now Available in Persian

The beautifully curated pages and essays of Harry Potter: A History of Magic have brought the British Library’s temporary exhibition of the same name close to all those who were not able to see it in person in either London or New York. While you can explore much of the collection virtually, speakers of one more language can enjoy the companion book now that Tandis Books has released it in its first official Persian translation for fans in Iran.

Harry Potter: A History of Magic is an original nonfiction book that explores the expansive mythology and real-life inspiration behind the Harry Potter series. A History of Magic has been described by Tehran Times as “a treasure trove of artifacts from the British Library and other collections around the world, beside exclusive manuscripts, sketches and illustrations from the Harry Potter archive.” In addition to the artifacts curated by the British Library, Bloomsbury, and the author, the book contains essays on various related subjects and themes from potions to spells, from creatures to stars, written by the screenwriter of the Harry Potter films Steve Kloves, naturalist and presenter Steve Backshall, the Reverend Richard Coles, historian Professor Owen Davies, journalist Julia Eccleshare, author Roger Highfield, journalist and author Lucy Mangan, gardening expert Anna Pavord, and astronaut Tim Peake, all connaisseurs in their own field of magic.

The Persian edition of A History of Magic has been completed by Vida Eslamieh, a translator of six of the seven Harry Potter books. As in the case of rarer editions around the globe, multiple unofficial translations of Harry Potter have been released in Iran aside from Eslamieh’s version. This was especially true at the time of the original book releases in the 2000s due to the demand to have the texts ready as soon as possible, even if they weren’t perfect. Talking to Mehr News Agency in 2008, Eslamieh described the circulation of 16 different Harry Potter translations in Persian as a “catastrophe,” but she encouraged newer and better takes on already translated books as the language changes. We can trust her authorized version to be a quality one, and its cover art is as fiery as the flames of a phoenix. 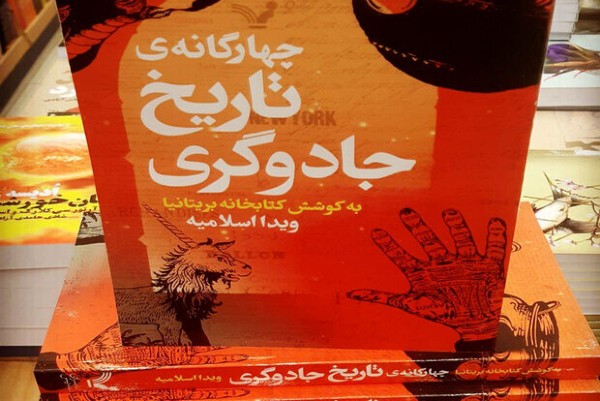 Speaking of covers, the Iranian editions of Harry Potter have some of the most unusual designs, but never judge a book by its cover, right? If you’d like to explore the world of Harry Potter in different languages, we found a website where you can have a listen to the first page of Sorcerer’s Stone in just about every existing official and unofficial translation, including really special ones such as Occitan, Scots, and ancient Greek. We also recommend a revisit of our Alohomora! podcast’s episode on the topic. If this is not enough to quench your listening needs, Harry Potter: A History of Magic is also available on Audible as an 11-hour audiobook narrated by Game of Thrones actress Natalie Dormer.