It’s Time to Go Back to Hogwarts – Virtually

It’s almost time to head back to Hogwarts. Witches, wizards, and Muggles alike have all been affected by COVID-19, so this year, we will be returning to Hogwarts digitally!

Over the last several years, fans have traveled to London’s King’s Cross station to celebrate September 1 with a countdown to 11 a.m. when the Hogwarts Express departs. Wizarding World Digital is asking fans to not travel to King’s Cross station for this moment this year, to stay safe at home, and to join in on the digital countdown across the world.

On September 1, Wizarding World Digital will be hosting a special Back to Hogwarts livestream. We can expect to see some familiar faces, including Jason Isaacs (Lucius Malfoy) and Bonnie Wright (Ginny Weasley). There will be members of Harry Potter and the Cursed Child’s production and so much more! Get ready for some wizarding world-inspired activities. CineConcerts will be performing musical selections from each film, and Harry Potter and the Order of the Phoenix choreographer Paul Harris will be teaching everyone how to refine the art of wand combat.

It wouldn’t be a celebration without a little mischief. James and Oliver Phelps, the beloved Weasley twins, will also be in on the action. James is excited to be participating.

I’m so excited to be playing a part in the first[-]ever digital Back to Hogwarts! 2020 has definitely been a strange year, and it’s really important that we all do everything we can to keep safe, including staying home. I hope fans will join us and keep the celebrations virtual.

Oliver is looking forward to this digital celebration too.

The Wizarding World fans are the greatest, and getting the chance to share this special day with people all over the world is going to be brilliant. I’m really looking forward to everything this Digital Back to Hogwarts has in store, and it’s a bonus that we can all do it from the sofa!

The livestream for this celebration will be taking place between 10:30 a.m. and 11:30 a.m. on September 1. This time is listed in BST, so make sure to find out what that means for your time zone so you don’t miss out. Keep a close watch on Wizarding World Digital’s social media channels for additional updates. You can also check out the #BackToHogwarts tag on Instagram and Twitter to see how other fans are celebrating.

Here’s how we can all get ready for the big day in September: Visit the Back to Hogwarts hub on Wizarding World Digital and watch magical activities begin to show up on August 29. There will be trivia challenges, quizzes, puzzles, and many more activities to test your Harry Potter knowledge. MinaLima has a special print to commemorate this day, and it’s giving us major nostalgic vibes. 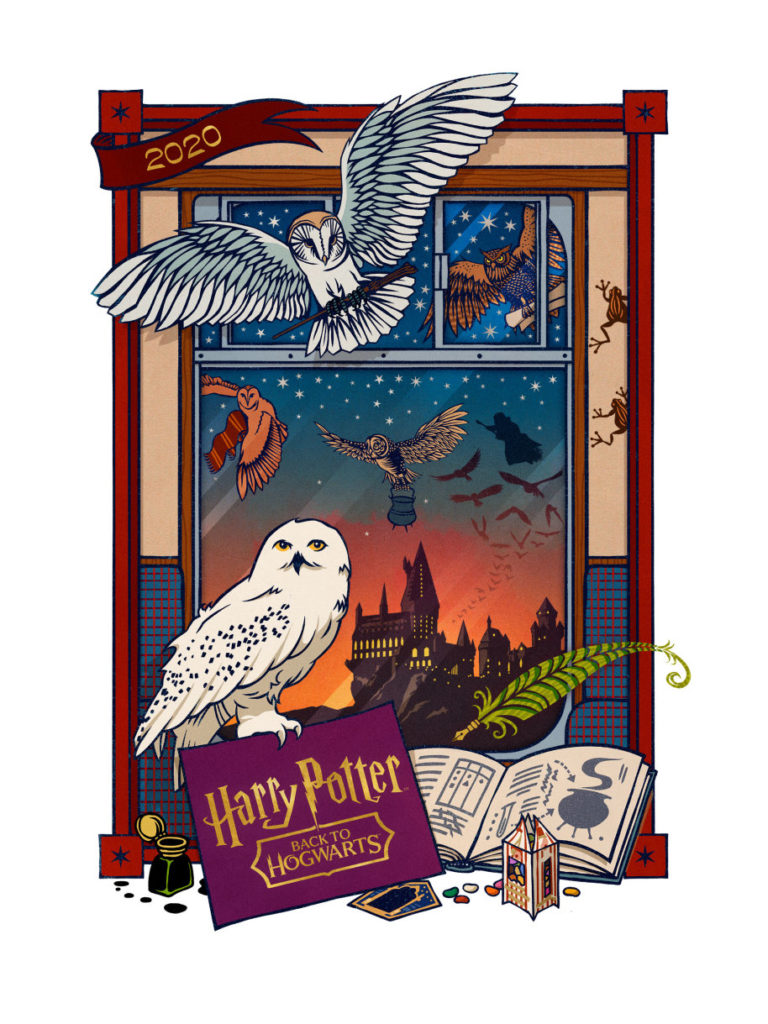 MinaLima’s “Back to Hogwarts” print showcases owls carrying school supplies through a window on the Hogwarts Express.

Wizarding World Digital is also asking fans age 18+ in select countries to take photos celebrating the wizarding world. Get creative with your photo and you might be featured at King’s Cross station along with other fans.

This is a huge celebration, and it’s all virtual! We can’t help but wonder, how amazed would Arthur Weasley be with the Muggle technology for this livestream? Will you be watching this stream on September 1? Let us know.

ANNOUNCING A VIRTUAL DEPARTURE FROM PLATFORM NINE AND THREE[-]QUARTERS…

HARRY POTTER FANS WILL STILL GO ‘BACK TO HOGWARTS’!

Each year, on the 1st of September, Harry Potter fans have gathered at London’s King’s Cross [s]tation. At 11:00 am precisely, they raise their wands joyfully to mark the Hogwarts Express’ departure from [p]latform [n]ine and [t]hree-[q]uarters, as it takes students to the fabled school of witchcraft and wizardry for another year of magic and adventure. For the Class of 2020, the celebration has gone digital, so more fans than ever before can join in!

The Wizarding World is asking fans to avoid the busy station this year and instead extends an open invitation to come together virtually and join the very first digital Back to Hogwarts. This completely free, atmospheric, virtual event has been developed to help keep everyone safe and be enjoyed from the comfort of home. As such, fans should plan to tune in online and make no plans to travel.

From 29th August, fans can check out the Back to Hogwarts Hub on WizardingWorld.com, where they can join the Harry Potter Fan Club, get Sorted and ready themselves to celebrate with an incredible selection of content, including:

- Hearing from some of the creative masterminds responsible for bringing the magic to life (including genius wand choreographer Paul Harris, who will be demonstrating and teaching the art of Wand Combat)
- Transporting themselves from the [M]uggle-world [sic] into the magical one, by listening to the Journeys to Hogwarts Soundscape - a Harry Potter immersive audio experience featuring all the sounds you’d hear on that iconic journey. Simply close your eyes and let your imagination roam!
- A CineConcerts performance featuring orchestras from around the world playing memorable musical selections from each of the eight Harry Potter films at home
- A sneak peek of the brand-new House of MinaLima on opening day, featuring Miraphora Mina and Eduardo Lima, plus exclusive Back to Hogwarts 2020 celebration artwork, which was created especially for the occasion and is also available as a limited-edition art print!)
- Going back to where the magic began with the celebrity readings of Harry Potter and the Philosopher’s Stone (accessible exclusively for registered members of the Harry Potter Fan Club)
- Plus, a host of Hogwarts-themed inspiring craft ideas and creative tutorials for all ages

On the 1st September, more people than ever will be able to join the very first virtual Back to Hogwarts Livestream and experience the excitement of a fan celebration at King’s Cross (including the countdown) without leaving the house! The livestream will feature a mass of surprises and fun, including appearances from special guests, including James and Oliver Phelps (Fred and George Weasley) and Jason Isaacs (Lucius Malfoy) and Bonnie Wright (Ginny Weasley).

Sharing their enthusiasm at being involved in this year’s celebration, James Phelps said:

“I’m so excited to be playing a part in the first[-]ever digital Back to Hogwarts! 2020 has definitely been a strange year, and it’s really important that we all do everything we can to keep safe, including staying home. I hope fans will join us and keep the celebrations virtual.”

Oliver Phelps added: “The Wizarding World fans are the greatest, and getting the chance to share this special day with people all over the world is going to be brilliant. I’m really looking forward to everything this Digital Back to Hogwarts has in store, and it’s a bonus that we can all do it from the sofa!”

In addition to familiar faces dropping by, there will be trivia games for fans to join in with, and even an appearance from the cast of Harry Potter and the Cursed Child, before the fan countdown kicks off.

Additionally, fans can get even closer to the magic by submitting a snap of themselves to join the ‘Back to Hogwarts - Class of 2020’. Their photos will be added to a digital mosaic, which will grow throughout the day to bring the community to life. This is a chance for fans across the globe to show off their best cosplay, call out their House Pride or simply celebrate their fandom! Harry Potter Fan Club members will also receive a memento of the day too, as the mosaic will be available to them exclusively as a digital download to keep.

Fan[-]submitted imagery will also be displayed inside King’s Cross station, giving participants a virtual presence there throughout the day! There’s no need to head to the station to check it out, though, as it will be available to view throughout the morning via the livestream and on social.

The Back [t]o Hogwarts Livestream will also support Lumos, as fans will have the option to press a button during the stream and make a donation throughout the digital event.

The digital event will take place between 10:30 BST [and] 11:30 BST on 1st September, fans can tune in any time by visiting www.wizardingworld.com, where the livestream will be hosted.

There is a huge amount in store… to be among the first to receive updates, don’t forget to go to www.wizardingworld.com and sign up to the Harry Potter Fan Club. There, you can also check the Back to Hogwarts Hub to receive additional information on what will be happening in the run[-]up to, and during, Back to Hogwarts 2020 - as the Wizarding World seeks to safely bring the magic home.