If you’ve ever wanted to own pieces of Potter history and support charity at the same time, you’re in luck!

Mica Daly-Smith, a Potter fan who has loved the series since childhood, is selling her collection and donating the funds to Mermaids, a British charity supporting trans and gender-diverse children and young people.

Speaking to PinkNews, Daly-Smith revealed that she is selling her collection of memorabilia in response to J.K. Rowling’s controversial statements on trans people, which has left her feeling unable to separate the author from the series.

I wish I could separate [JK Rowling] from her creation, but as a woman, I looked up to her for so long and was just as much a fan of hers as I was [of] the series. Her name is so entwined with Harry Potter’s for me that I can’t look at the franchise I loved in the same way.

Items from Daly-Smith’s collection that are up for sale include four call sheets from the filming of the Shell Cottage scenes in Harry Potter and the Deathly Hallow – Part 2. The call sheets detail the location of the various scenes, the actors needed, and the times that they were required to be on set. The lists also detail the names of the stunt performers and stand-ins needed for the shoot, as well as details on the weather and tide times. A fifth call sheet for scenes inside the Lovegood house is also up for sale, and the highest bid is currently £31. 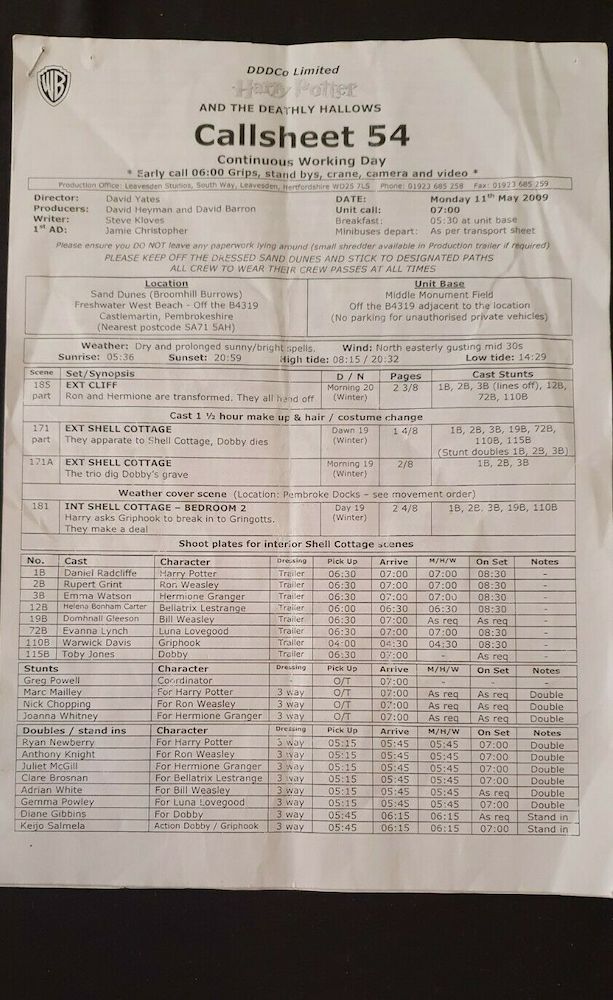 This call sheet is for some of the scenes filmed at Shell Cottage, including the scene in which Harry asks Griphook for help breaking in to Gringotts (Credit: Mica Daly-Smith). 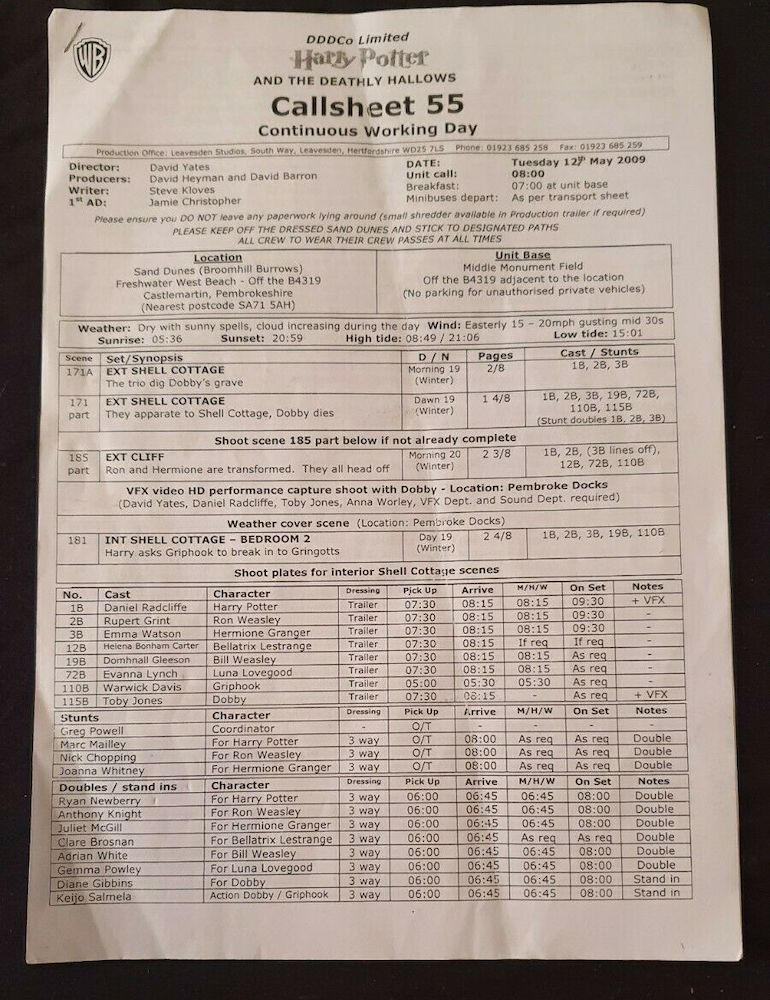 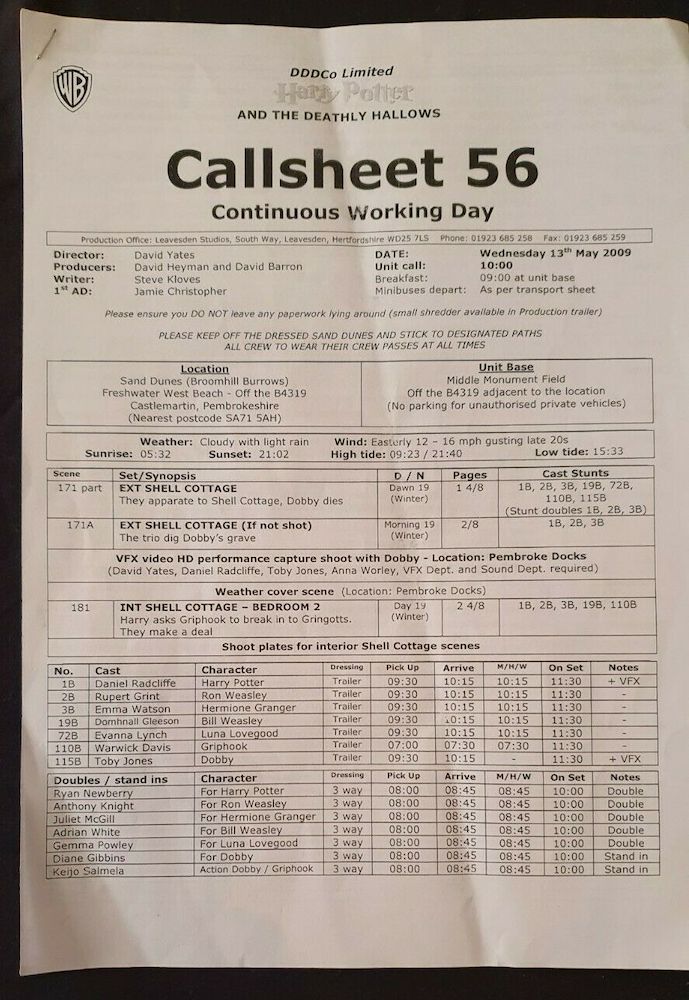 An interesting detail that can be seen in the call sheets is the pickup times. Warwick Davis often has a much earlier pickup time than the rest of the cast due to the time he had to spend in the makeup chair! (Credit: Mica Daly-Smith). 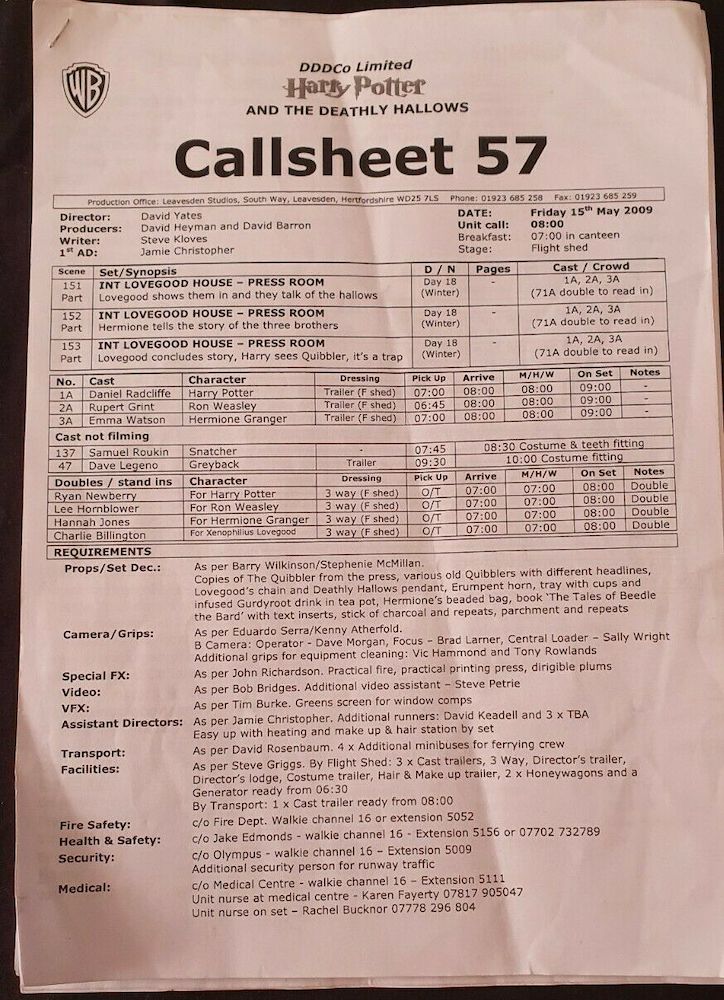 This call sheet is for scenes filmed inside the Lovegood house and notes a list of props required (Credit: Mica Daly-Smith). 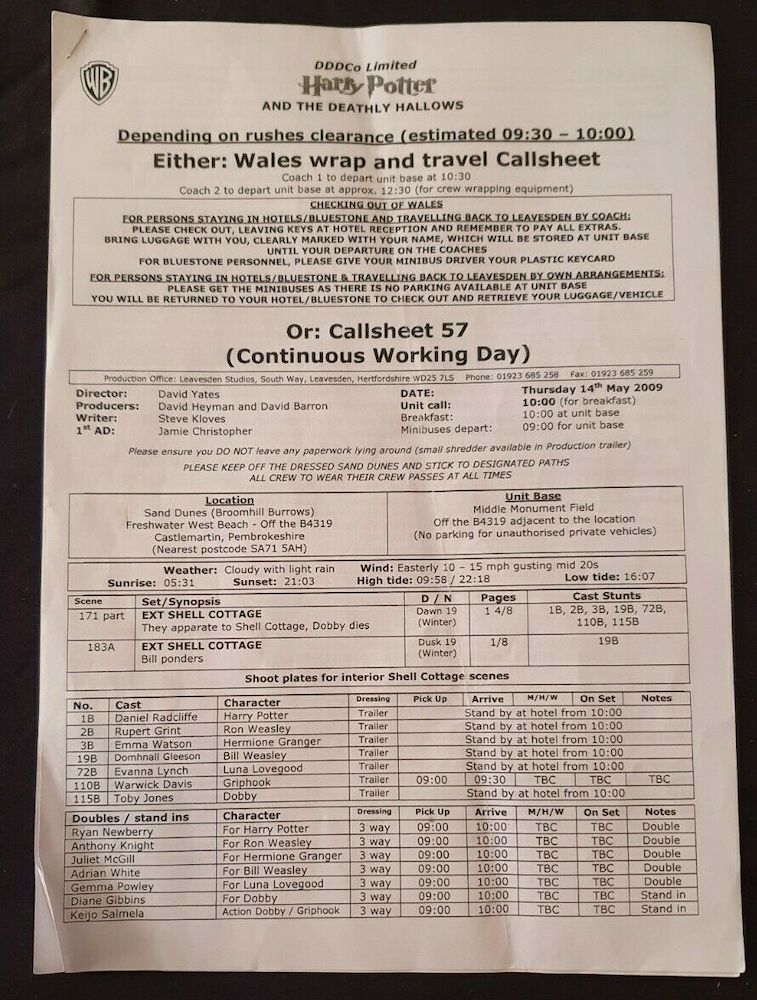 This call sheet shows the schedule for the end of filming in Wales and travel back to the studios in Leavesden (Credit: Mica Daly-Smith).

Daly-Smith revealed that she got her hands on these pieces of Potter history thanks to the acts of some kind security guards, who gave her the call sheets after she and a friend camped out at Freshwater West beach in Wales to watch the scenes being filmed.

We camped over and watched them filming the Shell Cottage scenes. We befriended some security guards who snuck us some food whilst we watched and sent us the call sheets after the scenes had wrapped. It was such an incredible day; we got to meet Daniel Radcliffe, Rupert Grint, Emma Watson, Evanna Lynch and the incredible icon that is Helena Bonham Carter! I was so starstruck.

The call sheets are not the only items up for sale in aid of Mermaids. Daly-Smith is also auctioning a film trailer reel for Harry Potter and the Deathly Hallow – Part 1, a copy of The Tales of Beedle the Bard, Harry Potter: A Pop-Up Book by Insight Editions, and a movie companion book titled Harry Potter: Film Wizardry.

The items are only up for auction for a few more days, so make sure to check them out! If you’re looking for other ways to support charities and good causes while enjoying Potter, then why not check out the Potterhead Running Club or the Harry Potter Alliance?