The first sign that the theater industry might not emerge from the pandemic unscathed was the news that the beloved Broadway musical Frozen would be closing due to egregious costs. Soon after, a slew of other plays and musicals announced their closures as well, with several of them never making it past previews. After 34 successful years in the West End, even musical theater phenomenon The Phantom of the Opera could not escape the same fate.

Even for the theaters that are still barely hanging on, many of them are on the brink of bankruptcy. The world-renowned Shakespeare’s Globe warned that it was facing the “biggest threat to its future since opening in 1997.” The oldest and one of the most illustrious London theaters, the Old Vic, is in a “seriously perilous” financial situation, lamented artistic director Matthew Warchus. If the most historic theaters are facing such a dire situation, one can only imagine the financial struggles that smaller regional theaters are currently drowning in. 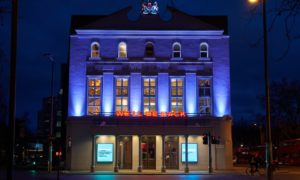 A brilliantly lit sign sits atop the Old Vic, but the theater’s future may not be so bright…

The theater industry is one of the hardest-hit sectors of the economy since it relies entirely upon massive crowds that are in close contact. A study by Oxford Economics yielded a grim outlook of theater’s future: a £74 billion plunge in revenue and the permanent loss of 400,000 jobs. In other words, the United Kingdom is facing an irreversible “cultural catastrophe.”

Now, theaters are feeling the stinging effects of cuts made to Arts Council England’s (ACE) budget a decade ago. While ACE has rolled out a £160 million Emergency Response Package, it is grossly inadequate to save hundreds of theaters.

To make things worse, Culture Secretary Oliver Dowden has clarified that the £1.57 billion Emergency Support Package will aim to preserve “crown jewels” in the arts sector. This means that smaller, regional theaters, which often boast greater diversity and support budding artists, will be the first to go. Those that need the money the most will be the last to receive it.

The greatest irony of it all is that, during lockdowns around the world, theaters stepped up to the daunting challenge of keeping us entertained and educated, demonstrating – now more than ever – the vital place that the arts have in our society. Despite losing out on the millions they could’ve made from monetizing their backlog of filmed performances, many of them chose to stream them internationally for free.

With the UK government not providing sufficient relief, theaters are turning to consumers and audiences for help. Theatres Trust has launched the #SaveOurTheatres campaign, along with a Crowdfunder to keep theaters across the nation alive. On the Crowdfunder page, you can choose which local theater you’d like to donate to, and each featured theater comes with a short write-up on its history, the struggles it’s facing, and how every dollar and pound will go a long way in enabling it to live to see another week.

Many high-profile celebrities have joined in to back the campaign, owing their commercial successes to their humble origins on the stage. One of them is Jude Law, who portrays the younger version of Professor Dumbledore in the Fantastic Beasts franchise. In an article from WhatsOnStage, he shared his passion for theater:

Growing up, I was fortunate to be taken to theatres regularly, and this was where my love of acting first began. To this day, nothing beats the magic of live performance and the connection between audience and performer. We are lucky to have so many amazing theatres, from historic playhouses like Theatre Royal Margate to groundbreaking community spaces like Greenwich to intimate pub theatres like Hampstead’s Pentameters. 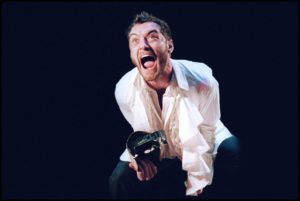 While Potter fans might be more used to seeing Jude Law as a calm and learned sage, he is also known for portraying the mad Doctor Faustus.

British theater is on the “brink of total collapse,” predicts Sonia Friedman, who has produced multiple West End hits including Harry Potter and the Cursed Child.

Once gone, British theatre is lost for good. An ecosystem as intricate and evolved as ours, shaped over 70 years, is beyond price. It cannot be rebuilt from scratch. As of now, without support, it is in grave danger.