In the lead up to the publication of Lethal White, J.K. Rowling left a number of clues about her forthcoming novel on her Twitter platform. There was a quote from the famously obscene Roman poet Catullus, whose poetry did indeed turn out to be crucial in Lethal White. Rowling also released the title of Lethal White on Twitter with a game of hangman, posting “_ _ _ H _ _  _ H _ _ _” (March 14, 2017). This generated a Twitter hunt for the correct title, but what no one realized at the time was that the form of the clue was itself a hint. For hanging in general – and a particular hanged man – are central to Lethal White. Finally, Rowling’s Twitter headers had white horses running wild all over them – something that enabled us to guess the location of the original “murder” in that novel.

Since then, Rowling has been much less active on Twitter, but she has continued to change her Twitter headers to reflect what she is working on. A number of these headers over the last year or so – such as Aleister Crowley’s natal chart and three cards from the Thoth Tarot deck – have hinted as to the occult ambiance in Troubled Blood (which I wrote about on Hogwarts Professor). Similarly, an illustration from Spenser’s Faerie Queene looks likely to reflect the source of the title and (I hope) epigraphs of the new novel. Certainly, it seems to support the relevance of Rowling’s choice of Spenser’s Florimell fleeing unwanted male attention in her Faerie Queene header that Robin has now been mentioned in Troubled Blood’s blurb as battling “unwanted male attention.” From this blurb, we likewise know that Troubled Blood will take place in Cornwall (a location I explored in yesterday’s blog). Today’s blog will consider what we can learn about the London setting of the novel from Rowling’s Twitter headers.

On November 15, 2018, Rowling changed her Twitter header to a 19th-century print of St. John’s Gate, Clerkenwell. We know she was writing Troubled Blood at this time as she tweeted a week later, “I’ll do the column if you write Robin’s internal monologue on the morning of her 29th birthday” (Nov. 23, 2018). 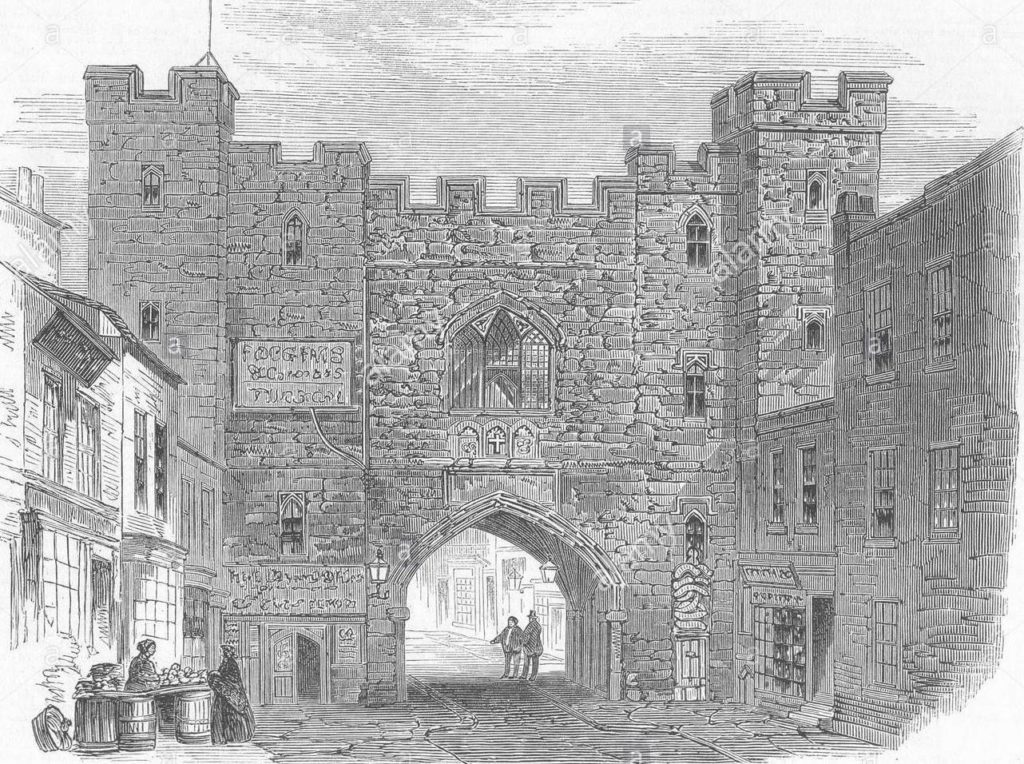 St. John’s Gate is a structure with an interesting and deeply literary history. It was built in the early 16th century as an entrance to the medieval Clerkenwell Priory, the English headquarters of the Order of the Knights of St. John (the famous Crusading Knights Hospitallers). The Order was dissolved by Henry VIII, and St. John’s Gate (as it stands today) is largely a Victorian reconstruction, the result of a renovation which followed from the revived Order reacquiring the building in 1873. At this period, it also became the headquarters of the Order’s most famous charitable foundation – the St. John Ambulance – and it is now a museum to the history of both institutions. It is a bit of a hidden gem, and it is possible that either its secluded garden or Norman crypt might tempt Robin to a visit (as similar gardens and underground chapels did in Lethal White). Of particular interest, however, is the literary history of the building, which the museum’s website describes:

During the sixteenth century, they were used as the offices of the Master of the Revels. Thirty of Shakespeare’s plays were licensed here. In the eighteenth century, the Gate was briefly used as a coffee house, run by Richard Hogarth, father of the artist William Hogarth. Dr. Samuel Johnson was given his first job in London at St John’s Gate, writing reports for The Gentleman’s Magazine. At the end of the eighteenth century, the Gate was used as a pub, The Old Jerusalem Tavern, where artists and writers, including Charles Dickens, used to meet.

This is a startlingly literary heritage for one building to boast, and I particularly like the fact that Hogarth’s father ran it as a coffee house that offered Latin instruction alongside its beverages. Given Rowling’s love for Shakespeare, Dickens, pubs, and Latin, all or any of these associations might make it into Troubled Blood. (It is also a building that looks back to the events of Lethal White as it was chosen as the landmark to represent Islington in the London Olympics.)

The other London location Rowling has given as a Twitter header (and which is likewise on the cover of Troubled Blood) is the Hampton Court astronomical clock. (Brilliantly, ChrisC has uncovered a link between this clock and the Clerkenwell Priory. Hampton Court Palace was built on the Priory’s land, and “the Hospitallers'” chapel bell can still be seen above the astronomical clock at the palace.)

Rowling changed her Twitter header to this image on July 17, 2020, after it had been trailed as a teaser on Robert Galbraith’s Twitter – hat tip to Rebecca H., the first to identify it. 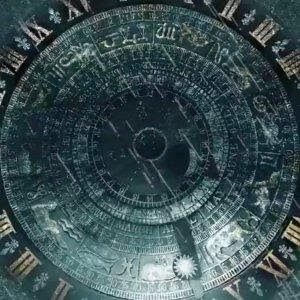 This clock has since been strongly trailed in the lead up to Troubled Blood. As well as the teaser tweets, the cover, and Rowling’s Twitter header, it is also mentioned in the short excerpt from the novel that has been released. This passage has Robin and Strike looking up at “an enormous, ornate, sixteenth-century astronomical clock of blue and gold.”

This clock was put up in 1540 while Henry VIII was honeymooning at Hampton Court Palace with Catherine Howard, and its Henrician origins are marked in the Tudor tracery of the corners, decorated with his heraldic badges and initials. The three copper disks of the dial rotate at different speeds revealing the quarters of the moon as well as the days of the month and year. The clock shows the earth at its center with the sun as well as the moon revolving around it in accordance with the cosmology of its time. The lunar aspect of the clock is set to enable the viewer to work out the time of high tide at London Bridge, while its solar aspect tells the viewer which sign of the zodiac the sun is occupying. 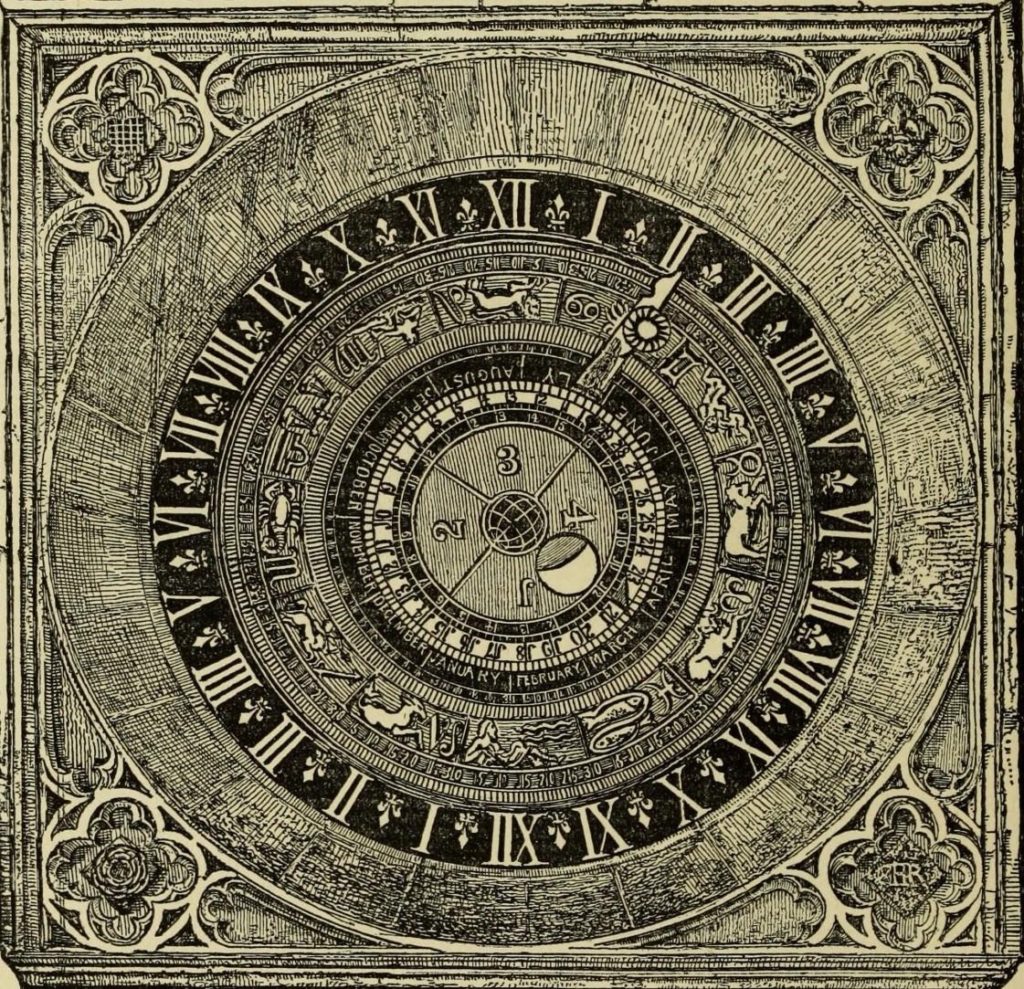 Engraving of the clock from Ernest Law, The history of Hampton Court Palace in Tudor times (London: George Bell and sons, 1885), 218.

This clock, like St. John’s Gate, has some interesting literary associations; in particular, a poem was written to it in the year of Victoria’s accession, marking the time when, after Hampton Court Palace had fallen out of favor as a royal residence, the clock stopped and no one was sent to mend it. G.P.R. James’s “To the Clock Without Hands at Hampton Court” (1837) calls the clock a “mystic dial” and uses it for a moralized meditation on time:

Memento of the gone-by hours,
Dost thou recal alone the past?
Why stand’st thou silent midst these towers,
While time still flies so fast?

O dial! art thou raised on high
To speak reproach for life’s abuse?
Or give to eager hope the lie?
Or tell Time’s future use?

What was particularly interesting about the teaser video of this clock was that it made use of its astrological symbolism. The video first zoomed in on the “IX” from the clock, then the zodiac sign for cancer, and then the (spurious) “XX” (a number which does not actually appear on the clock). The video’s code was accurately deciphered by Erica Jesse, the day before the cover was dropped, as meaning that the cover would be released on July 9, 2020. This code used cancer (the astrological symbol for June 20 – July 22) as a stand-in for July, a playful use of astrology which fits neatly with Troubled Blood’s emphasis on the related discipline of tarot. I suspect that the astrological aspect of the clock will prove to be central to its appearance in Troubled Blood given the arcane and occult themes that look likely to predominate.

Rowling is, in fact, startlingly well informed about astrology and cast two witty and delightfully illustrated natal charts for her friend’s children before she wrote Harry Potter. This symbolic use of the astrological sign of cancer in the Troubled Blood teaser makes me wonder if astrology is something that Rowling has also left a gingerbread trail for via her Twitter headers. On the 21st anniversary of the Battle of Hogwarts (May 2, 2019), she changed her Twitter header to a close-up image of the Capricornus constellation. I assumed at the time, due to the anniversary (on which she traditionally apologizes for a Harry Potter death), that this header referenced something she was working on in the wizarding world. But maybe the Capricorn reference was an astrological hint, pointing to the way in which astrology (like tarot) will be an important strand in Troubled Blood.

Looking forward to finding out on September 15th!