Party Like It’s Your Deathday in “Hogwarts Mystery”, “Wizards Unite”

That distinctive crisp scent is back in the air, leaves are skittering through the streets, and we can totally buy candy this year and just eat it ourselves without remorse. Halloween 2020 is here, wizarding world gamers, and we’ve got the appropriately themed events in Harry Potter: Wizards Unite and Harry Potter: Hogwarts Mystery to prove it! The former is ready to unleash a little darkness, while the latter is inviting us to the party of the last five centuries. Harry Potter: Puzzles & Spells is also joining the fun with a few seasonal tweaks. Read on for all the details, and have a spooky and safe Halloween. Phones at the ready!

With daylight saving time coming to an end Sunday (don't forget to turn back time!), Wizards Unite's final event of October seems particularly fitting. Darkness Unleashed kicks off at 11:00 a.m. PT today and will conclude at the same time Monday, November 1, so charge those phones and get ready to have a howling good time! 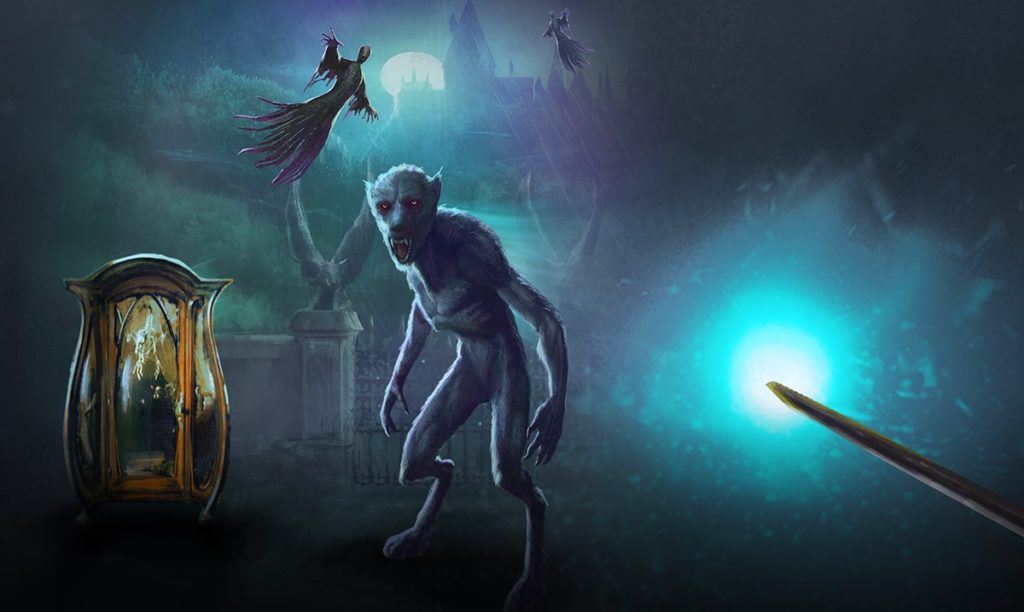 Your special assignments - should you choose to accept them - will focus on Foundables from the Legends of Hogwarts and Ministry of Magic Families, and increased rewards will include potions, spell books, runestones, energy, Defense Against the Dark Arts books, and the ever-elusive silver keys.

Out in the wild, keep your eyes peeled for things that go bump - or turn into murder hornets... or whatever your current greatest fear may be - in the night. You'll see increased appearances of Werewolves, Boggart Confoundables, and Dementor Confoundables, and you'll get more bang for your brew from Tonic for Trace Detection potions.

Bidding farewell to one month's worth of gaming means preparing for another, and we're also ready to unveil Wizards Unite's November calendar! Spoiler alert: It's all about Dumbledore's Army. 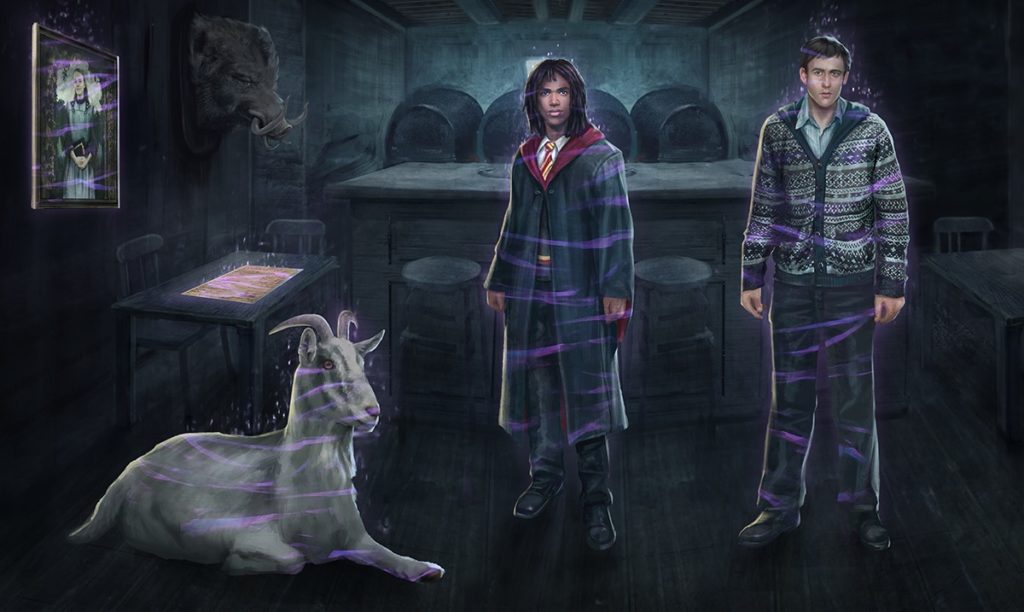 From 11:00 a.m. PT November 3 through the same time November 10, we'll be immersed in Part 1 of the Dumbledore's Army Brilliant Event, in which we'll be on the lookout for Brilliant Foundables from what the game's official site is calling the Hog's Head Pub (we know; it's the Hog's Head Inn), including Brilliant Neville Longbottom and Brilliant Lee Jordan.

November 14 will bring the 24-hour November Community Day, which centers on the Chess Chamber Registry Page. Get ready for Part 2 of the Dumbledore's Army Brilliant Event - featuring Brilliant Luna Lovegood and the Brilliant Dumbledore's Army Dueling Dummy - November 17--24, and enjoy the Wizarding Weekend November 27--30 by rounding up Foundables from the Care of Magical Creatures Family.

Over the course of the past few Brilliant Events, the game has also been returning to its original story line, and we barely remember what it was too. Grim Fawley, Penelope Padgett, obsessive love affair, disappearance, Calamity... That sounds about right. Anyway, Gareth Greengrass, Senior Unspeakable with the Department of Mysteries, keeps popping up periodically to drop tidbits of information that seem like they would've been much more helpful before the Ministry of Magic abandoned the investigation into the disappearance of the London Five and royally ticked off Fawley.

Some of Greengrass's most recent in-game revelations include the fact that "an ancient cult of Dark wizards and witches" used Ominous Masks - which we added to our Registries during the last Brilliant Event - that were "capable of transferring knowledge and power from generation to generation." The Calamity has quietly become more than just the wizarding world's most prolific Snatcher. It's now been proven that who or what it snatches can be manipulated and that the snatched bits of the snatchees sometimes return with planted memories.

Harry Potter and Ron Weasley, for instance, suddenly had memories of conversations with Fawley that never really occurred and in which he tells them he's not the one controlling the Calamity. He instead seems to be someone's - or something's - prisoner. Minister of Magic Hermione Granger doesn't think Fawley is the culprit either, telling Junior Undersecretary Constance Pickering that snatching Dark wizards doesn't seem like something a guy whose parents were killed by Death Eaters would do for fun.

Meanwhile, note fragments we recovered during the last Brilliant Event revealed that two unknown bad guys going by the names of Lethifold and Barghest were able to use the Calamity to obtain a creepy artifact that had once called Borgin and Burkes home. Lethifold and Barghest appear to believe this artifact will help them complete their "mission." To add an extra bit of spooky intrigue to that, Pickering recalls that Barghest is the name of a monstrous black hound that stars in tales from Northern English folklore.

And when you put it all together like we did above, the most delightful revelation of all is that this actually sounds interesting! Considering how incredibly grindy the game had become, this story could be just what the Healer ordered to recapture our interest.

As MuggleNet let you know last time, the Halloween force has been strong with Hogwarts Mystery throughout the month. For instance, our characters have been busy carving jack-o'-lanterns.

We've had the opportunity to add this awesome Gothic furniture suite to our dorms.

And thanks to the Stretching Jinx, Ben Copper ended up looking like one of those creepy things from Miss Peregrine's Home for Peculiar Children.

We'll definitely be sad to see the game's lovely decorations go, but we have one last Halloween hurrah to look forward to: helping plan Nearly Headless Nick's deathday party!

Don one of your spookiest outfits and make Nick proud, and we'll recap the fun next time around.

As for the main story, the Circle of Khanna was being particularly dense when last we saw them, identifying Argus Filch, Rolanda Hooch, and Severus Snape as the top suspects for the "R" mole at Hogwarts. Our character and Merula Snyde got the investigation off to a great start by baiting Filch. How? We threw a lollipop on Mrs. Norris. As you do.

Our thoughts exactly, Mrs. Norris. Needless to say, Filch wasn't the mole, so it was off to the castle grounds with Copper to confront Hooch, who was more concerned with some other idiot.

Were this Hogwarts circa 1975, we'd just point in the direction of James Potter and Sirius Black and leave it at that, but since it's not, we don't have to be Sherlock Holmes to know that the mystery flier is searching for the Cursed Vault. That should have provided a renewed sense of urgency to beat them to it, but instead, we went ahead and confronted Snape.

You say that as if any student at Hogwarts has ever gotten to just focus on being a student. We could be eaten by our textbooks while just walking to class, for Merlin's sake, so save the sanctimony, Sev, and another thing...

Oh, crap, that's still going on? We sort of forgot that the hospital wing is currently full of stone students (and one Poppy Pomfrey), and maybe that was finally the motivation we needed to get our rears in gear. Following a quick refresher on the Bubble-Head Charm, we hopped into the Black Lake and wasted no time finding a clue.

Before we could swim over and investigate, however, we were rudely interrupted.

Reasoning with the merwoman failed, and although we won the duel that ensued, we quickly exited the lake. A trip to Flourish and Blotts with Chiara Lobosca led us to the research of Newt Scamander, who basically said that merpeople dig music. So now we have to find someone at Hogwarts who knows a lot about music. Perhaps someone who sings and/or plays an instrument. Better yet, someone in a band...?

YES!!! The more Weird Sisters we can get in this game, the better. They're hilarious, and all the existential angst is refreshingly cathartic. So as the chapter updates pause once again, we have that to look forward to, plus these teasers from the game's latest newsletter: 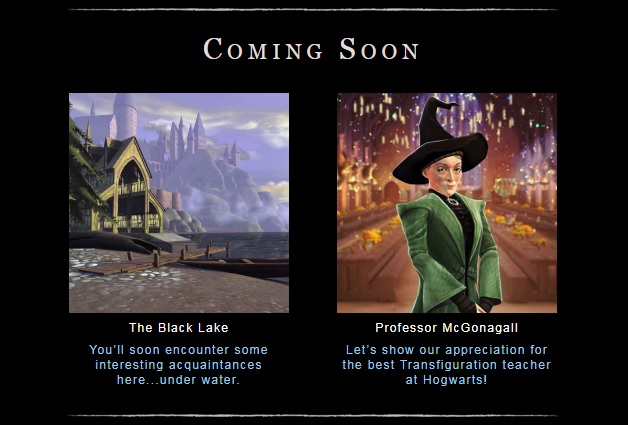 The Black Lake part isn't much of a revelation, considering we already know we're going back, but we do love us some Minerva McGonagall and will be looking forward to celebrating her in the near future. 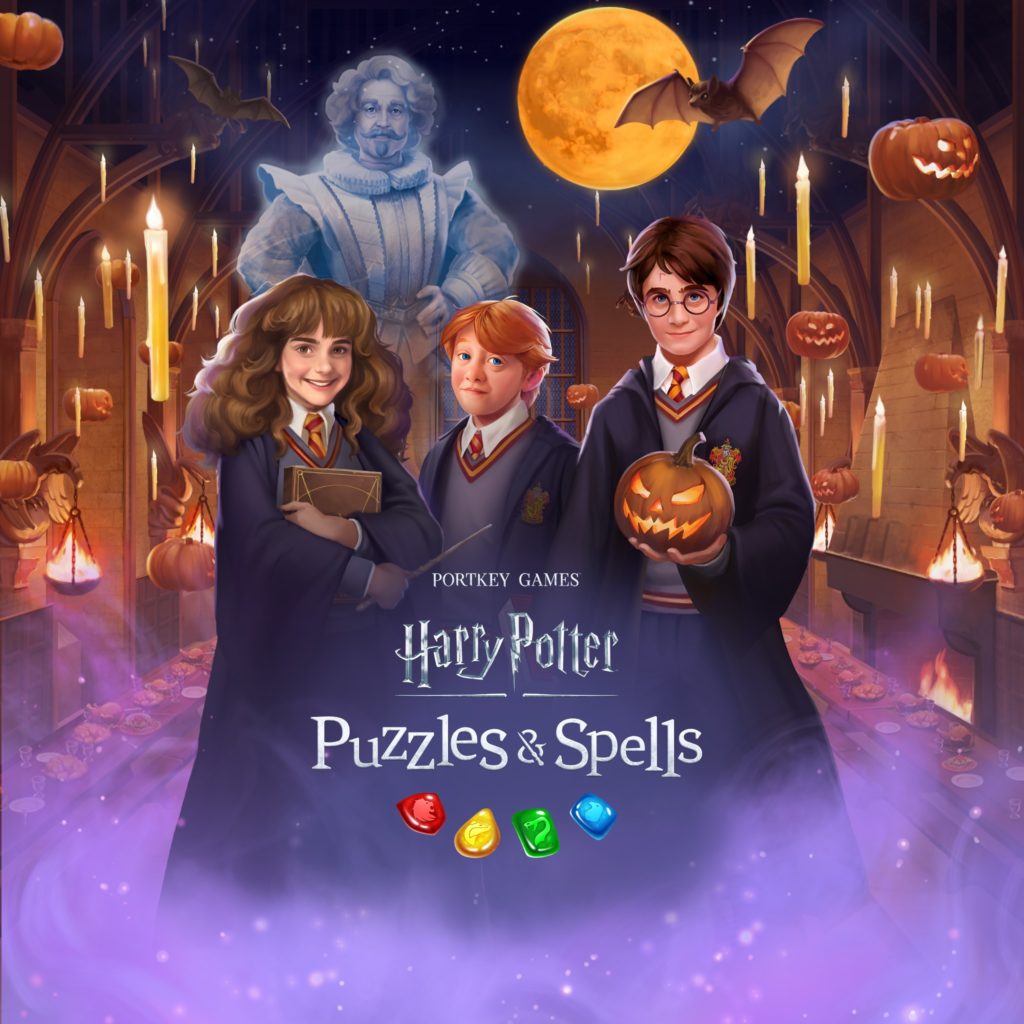 Puzzles & Spells has been available worldwide for a little over a month now, and it's getting solid reviews from match-three fans. How are you liking it? Let us know in the comments. If you haven't started playing yet - or haven't played in a while - however, you'll definitely want to pick the game up this weekend to enjoy the Halloween-themed additions.

If there's one thing we Harry Potter fans know, it's that following the spiders isn't the best advice. But in this case, they lead to extra fun. The game has launched a Dark Arts Event, to which you'll be introduced by none other than Lucius Malfoy. From there, try to match the gems featuring Spider Badges. The more spiders you collect, the more chests full of goodies you'll be able to unlock as you progress through the event. You'll also notice Spider Egg power-ups appearing in your puzzles; tap or swipe them and watch the creepy-crawlies invade the board to help you out.

These special Halloween touches will be available until November 2, so enjoy them while you can!