Muggle quidditch celebrated its 15-year anniversary on October 9, and the quidditch community is celebrating this milestone.

The International Quidditch Association (IQA) posted a video with one of the founders of quidditch, Alex Benepe. He described that this marks 15 years since the first real quidditch match was played. He founded quidditch on three values: have fun, be athletically engaging, and be inclusive for everyone. These values are still important in quidditch and bring lots of people to quidditch. He also described one of the moments when he realized that quidditch was something special and important.

One of the things that first made me feel that we had something really special was when young children would come up to me and tell me they wanted to go to a university that had a quidditch team so they could play quidditch.

Meanwhile, US Quidditch (USQ) has created a new website called Brooms Up. The website will show quidditch from the perspective of players, organizers, and photographers. New content will be posted every day between October 9 and 23. The first post was an introduction to quidditch and how it was created. 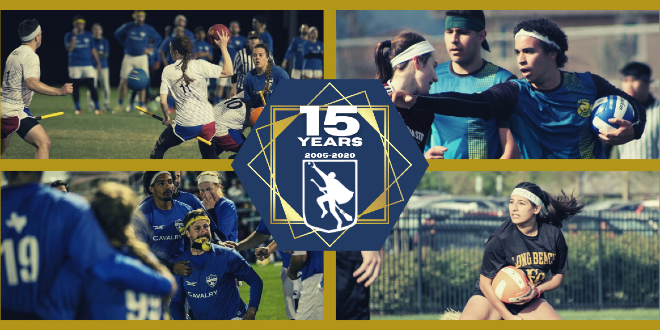 Alex Benepe founded quidditch together with Xander Manshel when they were looking for Sunday activities. They were both students at Middlebury College in Vermont. The first quidditch match was played on October 9, 2005, on Battell Beach in Middlebury by players wearing capes made from towels. One player even used a lamp as a broom!

The sport started growing quickly. The next month, there were already seven teams at Middlebury College, and the first tournament was held. In 2006, students at Vassar College also started to play Muggle quidditch. A year later, the first World Cup was held and later became known as the US World Cup. In 2008, the first Canadian team, from Quebec, participated in the third World Cup.

As the sport started to spread to the world, Muggle quidditch needed formal leadership. US Quidditch was created in 2010 and in the beginning, served as the sport’s international governing body. In 2012, the first international tournament was held in Oxford, United Kingdom, and later became known as the first IQA World Cup. This event helped evolve quidditch in Europe. In 2014, the IQA was created and split from USQ.

Since quidditch was created, there are currently 39 national governing bodies and approximately 600 quidditch teams. Many tournaments have been played – eight USQ World Cups, four US Quidditch Cups, and one IQA Pan-American Games in the United States; nine QUAFLs in Australia; and four IQA World Cups, three IQA European Games, and seven European Quidditch Cups in Europe. These are only the big events; there have been many smaller tournaments organized only for fun. Quidditch has also helped create two books (Quidditch Turns Ten by Alicia Radford and This Is How We Fly by Anna Meriano), one PC game (Courtyard Broomball), and one song contest (Qeurovision).

What is your favorite Muggle quidditch memory? Tell us in the comments below!