Review and Giveaway: “Harry Potter: A Pop-Up Guide to Diagon Alley and Beyond”

Insight Editions has just released another pop-up book: Harry Potter: A Pop-Up Guide to Diagon Alley and Beyond. If you already have the first book in this set, Harry Potter: A Pop-Up Guide to Hogwarts, this will be the perfect addition to your shelf. If you don’t – well, come along with me as I go through the delightful process that is figuring out how to open this book. 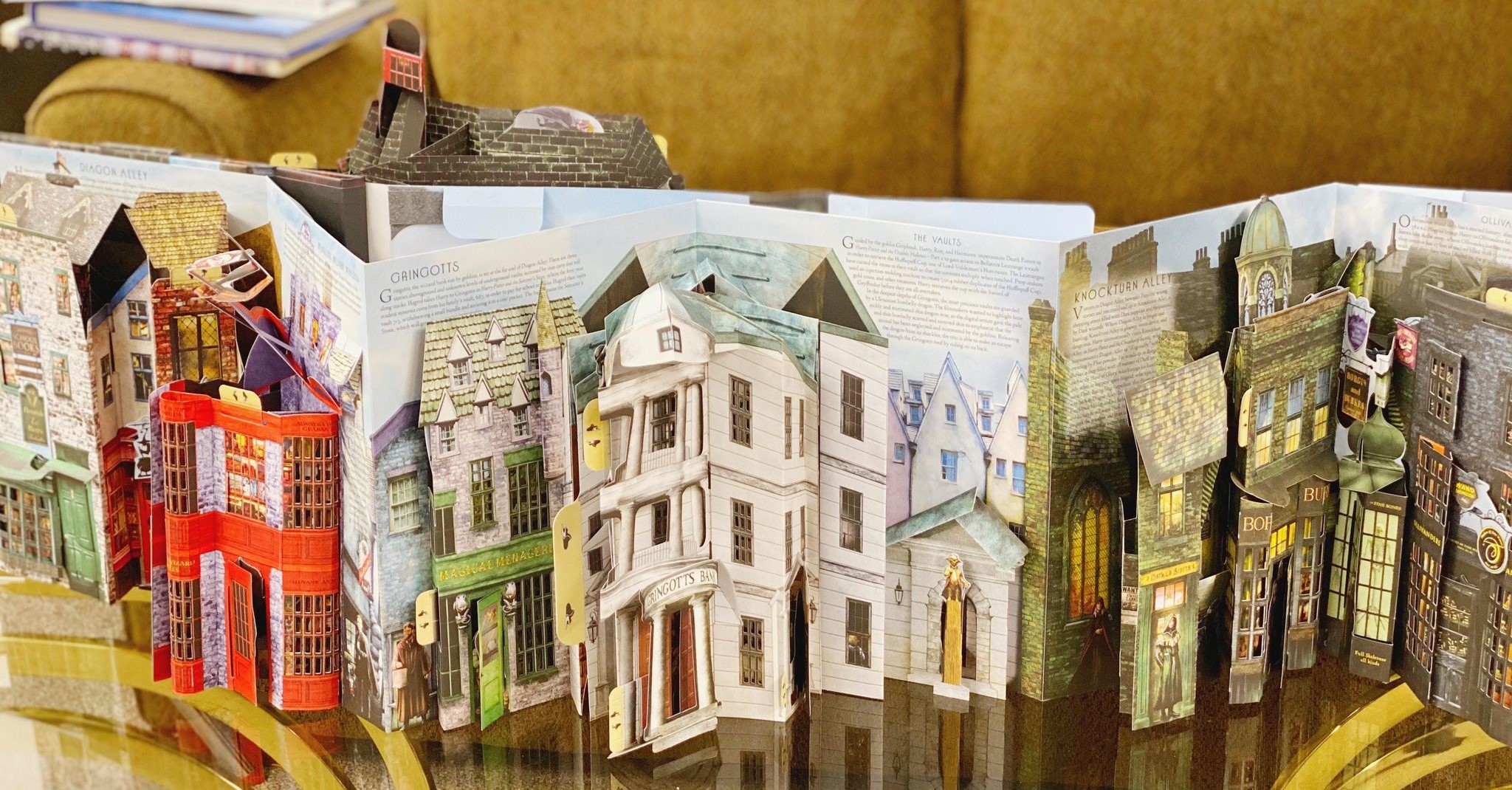 I’ll be completely honest – I didn’t realize that not only was this going to be a pop-up book, but Harry Potter: A Pop-Up Guide to Diagon Alley and Beyond is also a full-on, humongous, 4-foot pop-up diorama! I started opening the book on my desk and quickly had to move to the coffee table when it became apparent I would run out of space. There is so much going on in this book; I felt like Harry on his first Christmas at Hogwarts as I opened it up, and every time I thought I’d reached the end, it just kept going. There are five separate scenes included in this book, including a paper replica of the Hogwarts Express and the Knight Bus, which folds out flat onto the table so you can see the length of the train.

While I was (understandably, I hope) pretty engrossed in the complex and wonderful world that is the paper pop-outs of the book, I actually also really loved the way they worked a paragraph of text into each scene. It’s a nice mix of book facts, movie facts, and real-world tidbits about the production of the films and the actors themselves. I particularly enjoyed the note saying that James and Oliver Phelps (Fred and George Weasley in the movies) argue over which one of them the Weasleys’ Wizard Wheezes statue is based on, which I didn’t know and thought was really cute. 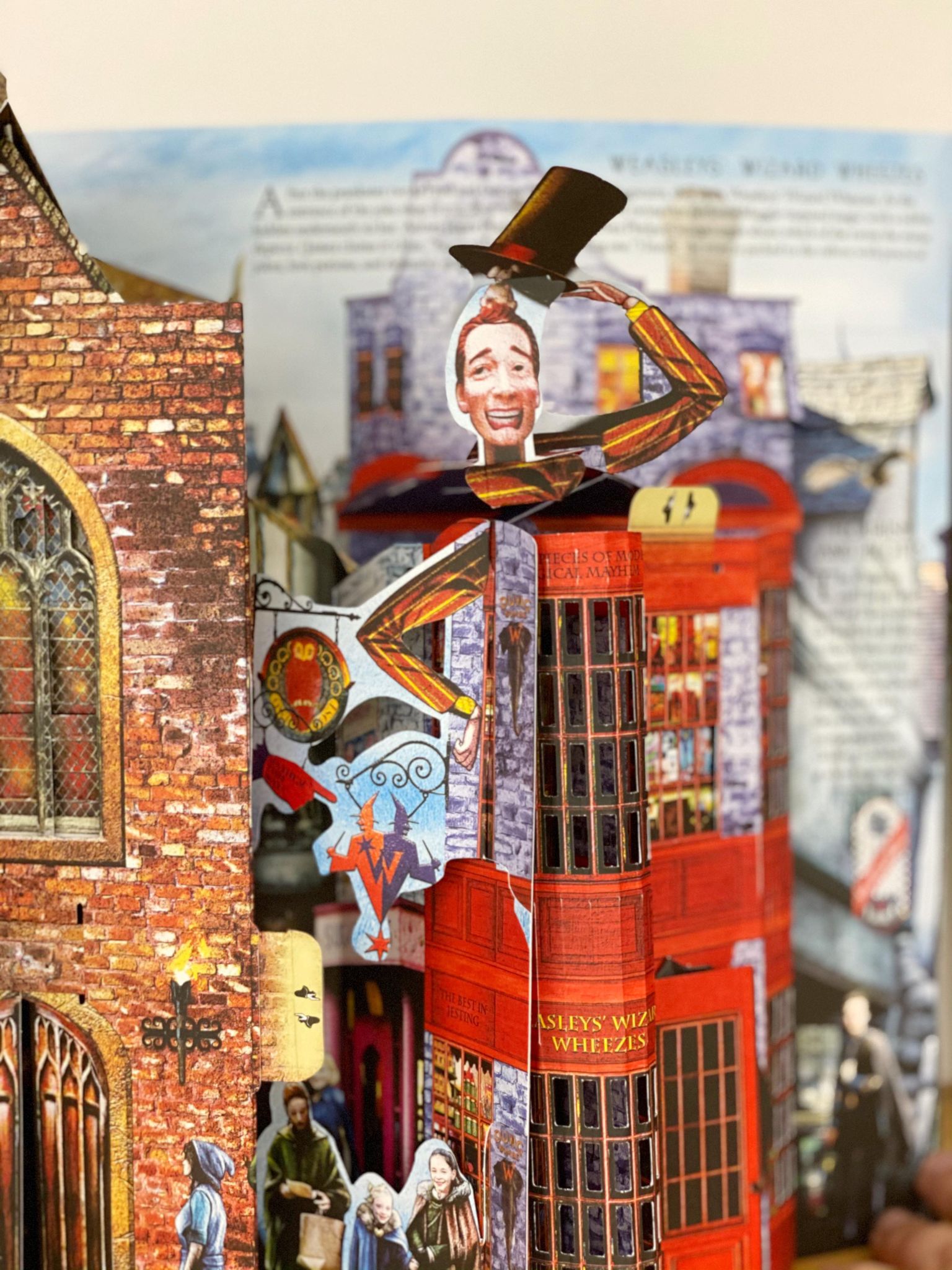 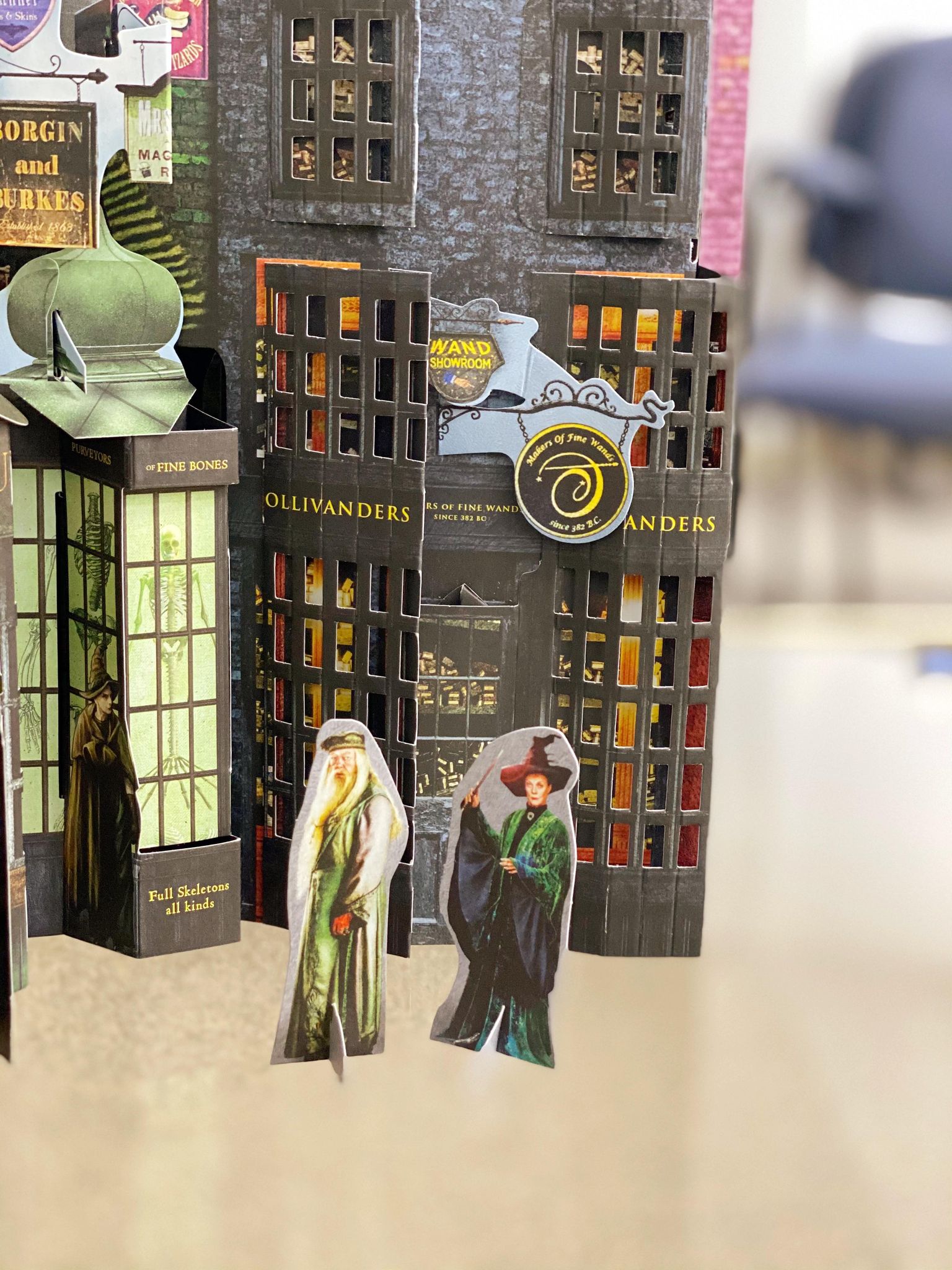 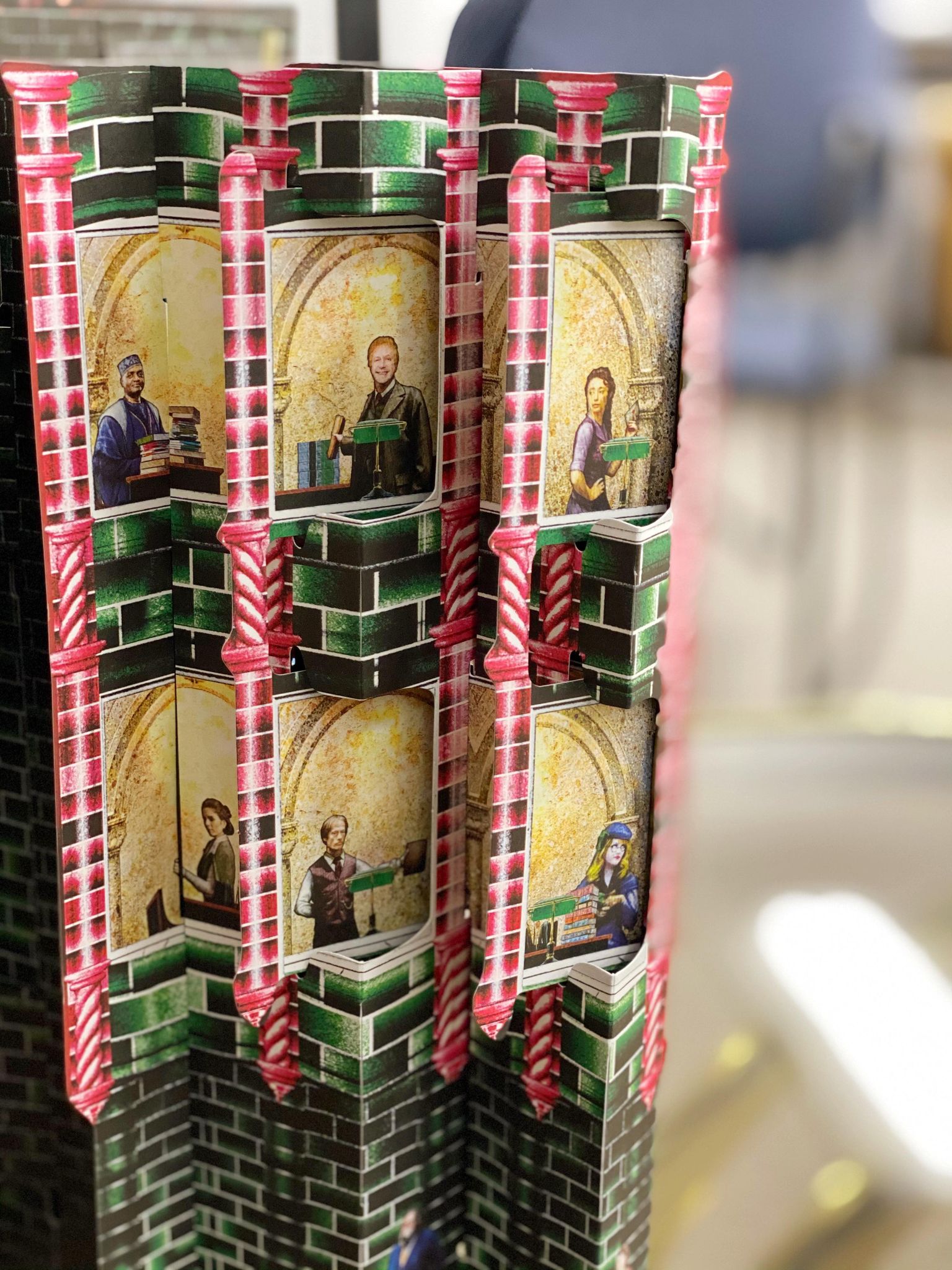 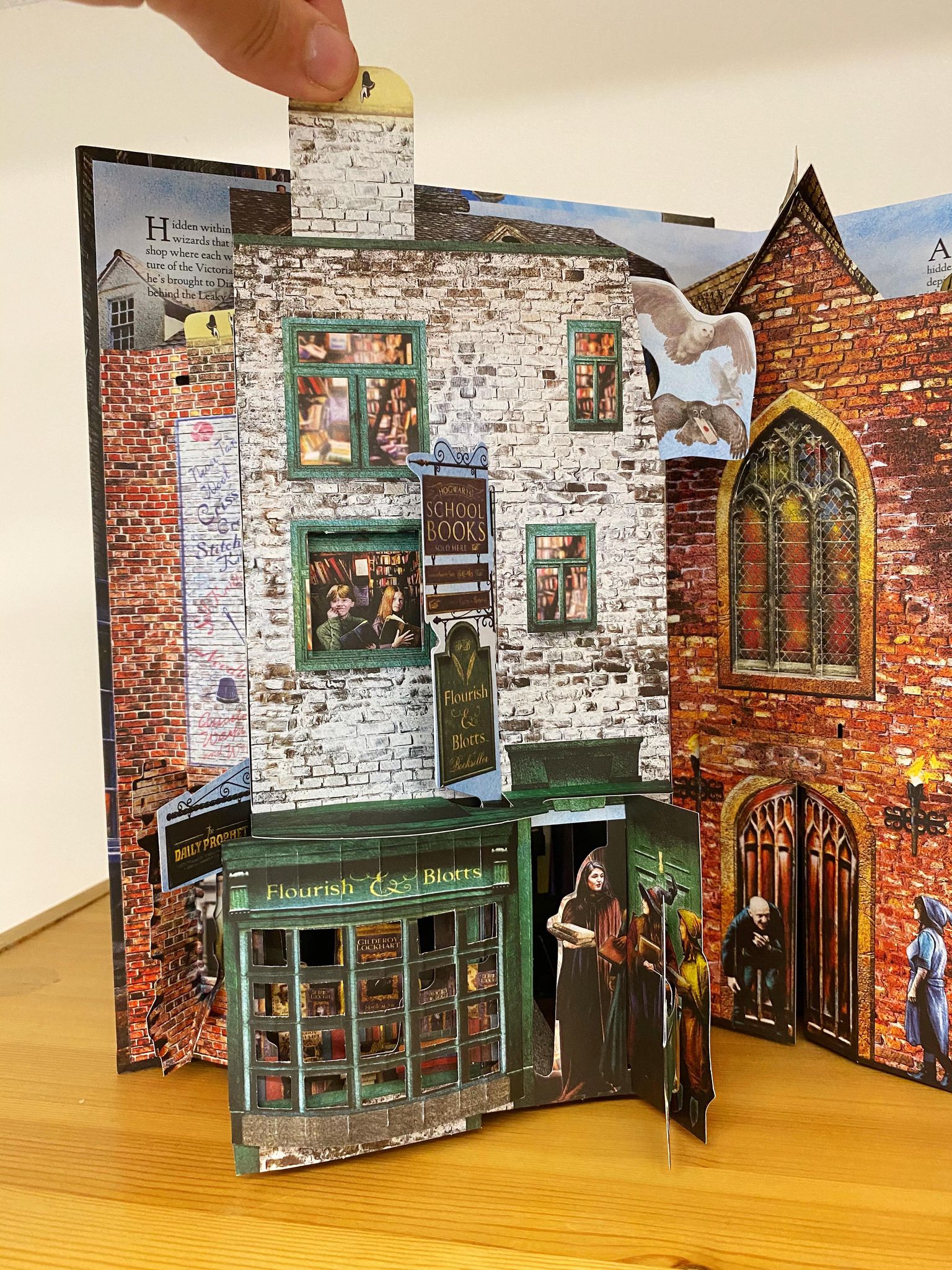 Something I really appreciated about this item was that it can be read two ways: as a traditional pop-up book, where you flip from one scene to the next with the architecture popping out of the book, or by setting it up as a whole diorama and moving from scene to scene yourself. I will say I found the instructions for setting up the diorama to be a little hard to follow, and I’m not sure if my final setup was quite how it was supposed to be. Regardless, I still really enjoyed the final product, whether I set it up properly or not.

I think if you had the space to leave the diorama up on display, it would be really fun to keep coming back to it, especially since they provide a series of paper character figures with stands so you can set them up throughout the diorama – or even act out a scene or two! It is a really sweet touch that takes the book from being more than just a (gorgeous) pop-up setup to a Diagon Alley dollhouse of sorts. It’s the gift that keeps on giving! Speaking of which, the many, many, many pull-tabs were endlessly fun. I had such a great time going through each scene and pulling all the tabs and catching all the lovely details and references to different moments throughout the series, and I’m not even sure I found them all! I know I’ll really enjoy setting this up again and again to discover new details that I missed the first time through – much like the books themselves. 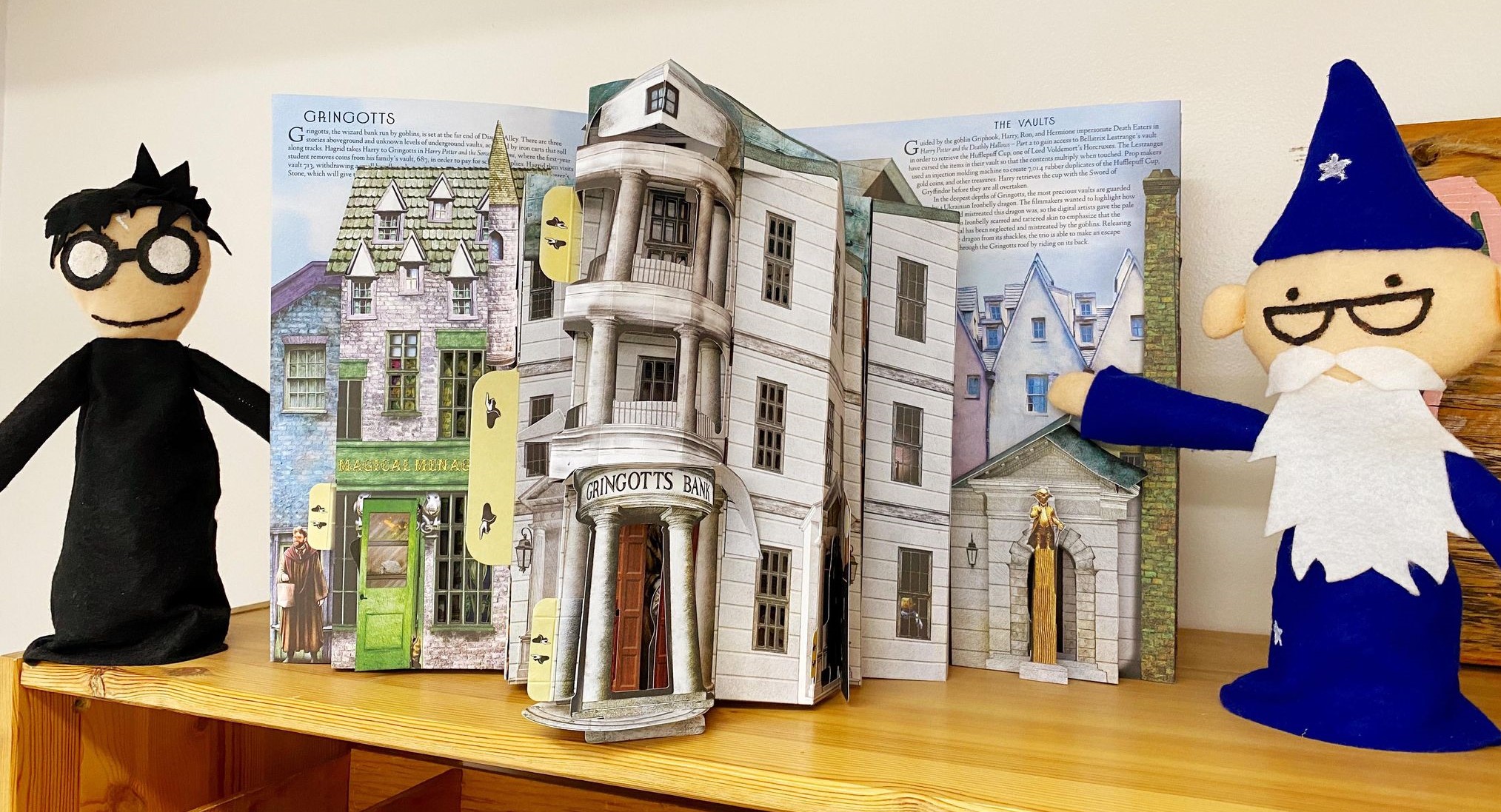 The pop-up book, open to the Gringotts spread, set up between a Harry and a Dumbledore Puppet Pal

While unfortunately, I don’t have a spot where I can leave the diorama set up long-term, I’m currently keeping Harry Potter: A Pop-Up Guide to Diagon Alley and Beyond set up on my shelf with my puppet pals for company. This book would make a really special gift for the Harry Potter lover in your life or the perfect treat to celebrate something for yourself. It’s incredibly rich in detail and easy to lose yourself in as you search for all the little easter eggs. Even if you’re not the kind of person who usually goes for collectible items, I think this pop-up book (more like pop-up adventure, I should say) is well worth making an exception, because not only is it gorgeous, but it’s also really fun to play with and easy to tuck away when you need the extra space. 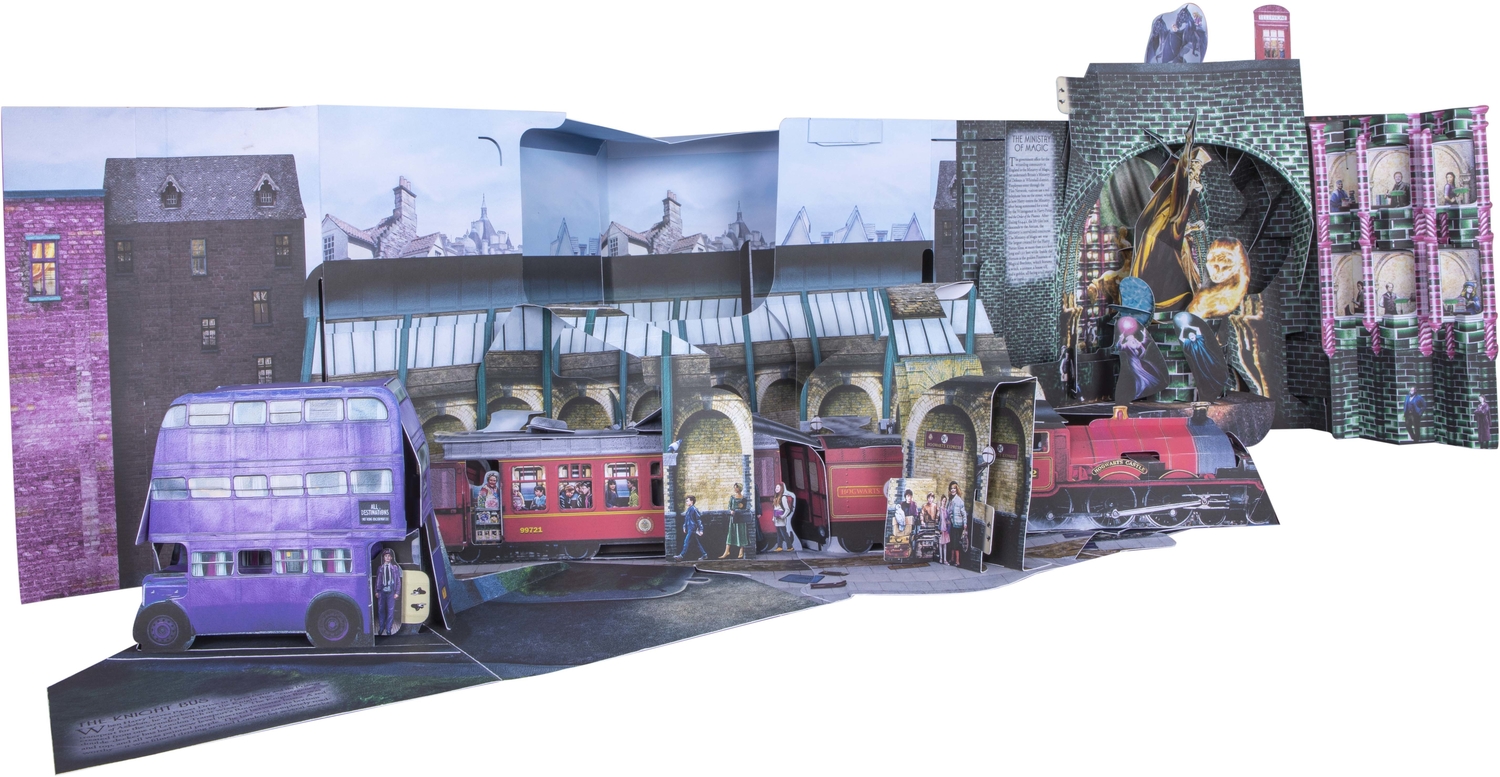 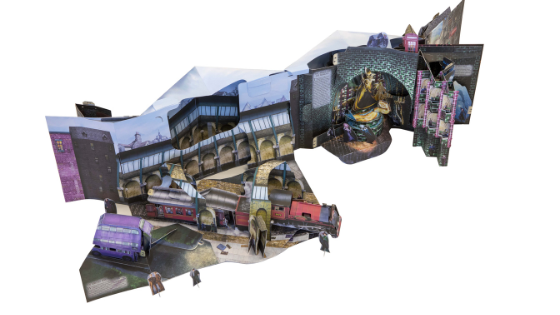 We are giving away one Harry Potter: A Pop-Up Guide to Diagon Alley from Insight Editions! Our contest to win is open worldwide starting today, October 8, and running through October 15 at 11:59 p.m. ET. Enter through the Rafflecopter below. Winners will be contacted via email after October 15, so make sure to check your junk or spam folders just in case our e-owl goes astray. All winners must respond within 24 hours, or another winner may be chosen.

A copy of  Harry Potter: A Pop-Up Guide to Diagon Alley and Beyond was provided by Insight Editions. All opinions belong to the reviewer.