A November to Remember Winding Down in Wizarding World Gaming

Happy November, wizarding world gamers! We hope you’ve been taking advantage of your extra time at home by surrendering entirely to that cozy autumn vibe, but let’s be honest – there are only so many Instagram photos we can take of mugs of hot liquid next to blankets and books. Even when you occasionally throw in a cat or two, it’s a snoozefest. We need a little safe excitement in our lives, and that’s where Portkey Games comes in. So get ready to learn a little more about the Calamity in Harry Potter: Wizards Unite, deep-dive into Harry Potter: Hogwarts Mystery, and even explore a few more tidbits regarding Hogwarts Legacy with MuggleNet’s latest gaming update. Phones at the ready! 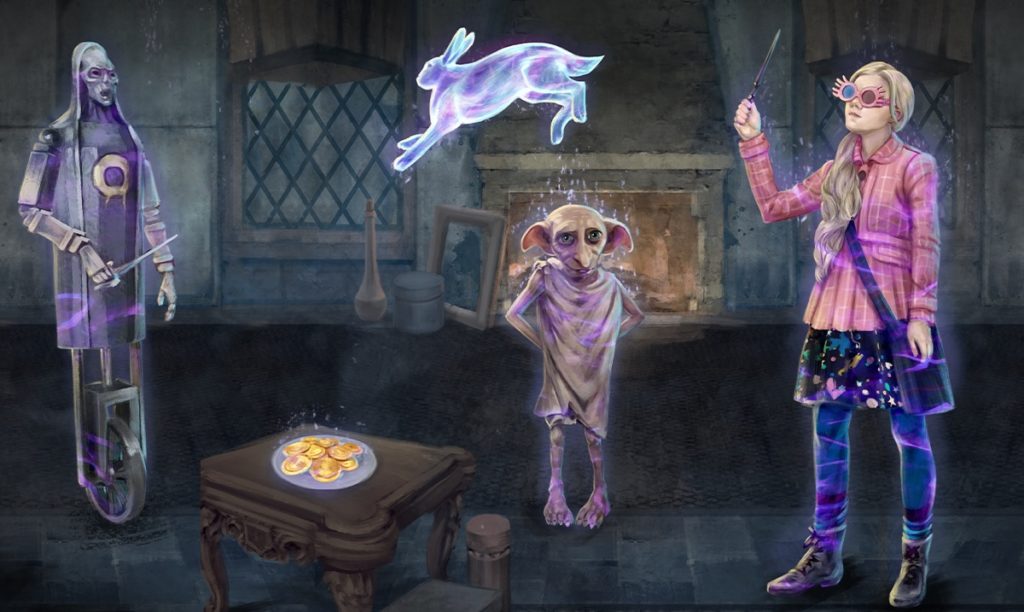 After that, you'll have just enough time to enjoy a big dinner before walking it off November 27--30 during Wizarding Weekend. This mini-event will center around the Care of Magical Creatures Family, so be on the lookout for Rubeus Hagrid, the Baby Norwegian Ridgeback, and more.

As for what we've seen so far this month, 12 Grimmauld Place has been added to the locales we're able to visit via Portkey, and you can enjoy a gallery of photos from Sirius Black's super cheerful childhood abode below.

We take a peek through a cracked door into the kitchen of 12 Grimmauld Place in “Harry Potter: Wizards Unite”.

A selection of family heirlooms – probably cursed – sit on a table beneath a broken mirror at 12 Grimmauld Place.

The umbrella stand at 12 Grimmauld Place looks as if it’s been freshly tripped over by Nymphadora Tonks.

Dare we climb the gloomy stairs at 12 Grimmauld Place?

We've also been delving further into that resurrected story line. Allow us to sum up:

Harry Potter busts in and informs us that he's managed to start a new surge by prompting the Calamity to snatch his memories of Dumbledore's Army. We're sure you'll be surprised to learn that Hermione Granger wanted a logical explanation, and Harry the Harbinger of Doom imparted that his Acromantula senses were tingling. He thinks the Calamity is planning something nefarious.

Feeling that Lethifold or Barghest might be fiddling with the controls again, he jumped in for a Calamity tug-of-war, and now we're all reminiscing about dueling dummies in the Room of Requirement. Neville Longbottom, Luna Lovegood, and Lee Jordan are among the Foundables in this Brilliant Event - as is a goat, but he doesn't have much to say - and Neville reported that his fragments have returned with a memory implant: a conversation with an unknown wizard, who questions Neville's loyalties and demands an Unbreakable Vow.

That's upsetting not only for Neville but also for Harry, who is now tasked with sussing out who sent this message in memory form and what they're planning. Lee has a false memory of watching an unknown wizard perform the Cruciatus Curse on another, and Luna recalls a hooded figure warning her that the Unforgivable are everywhere. And while that sounds like a threat, Luna felt the messenger seemed more frightened than menacing.

In conclusion, gamers, we apparently have a new incarnation of the Death Eaters to contend with. 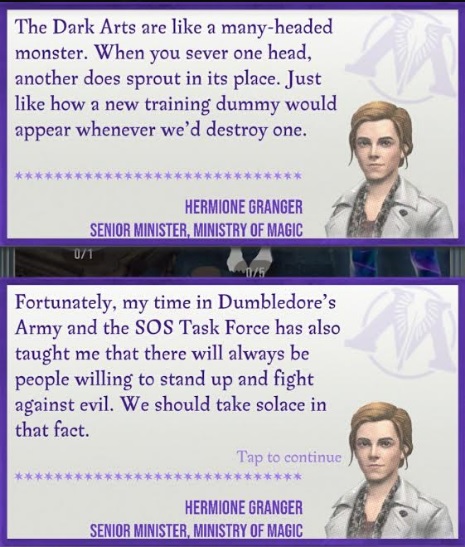 We may already have a defector on our hands, however. A member of the cabal - what is it with all these cabals coming out of the evil woodwork in wizarding world games these days? - has reached out to the Statute of Secrecy Task Force. They're offering intel in exchange for personal protection and a pardon, and they want to meet up with Harry - alone, of course. Spoiler alert: He's Harry Potter; he's obviously going.

A very merry un-deathday to you! Did you enjoy planning Nearly Headless Nick's big event as you bid a fond farewell to Halloween and all those lovely jack-o'-lanterns? Just in case you missed that side quest, here's a recap:

Yeah, that guy was fun - if fun means insufferable, which it probably does in 2020. We can speed through this one for you since the plot was rather silly. Nick was getting all geared up for his deathday party, but unfortunately, the Fat Friar invited Erling the Chatty to tour the school for Halloween. As it happens, October 31 is also Erling's deathday, and a pointless battle of wills between the two ghosts ensued until you were able to convince two grown deceased men to just have one big party.

Precisely. But there were some elements of fun in this quest, starting with the fact that it's provided us with an opportunity to make a Rocky Horror Pictured Show-related joke!

"And then a step to the rii-iii-iiiiiight..." And now that that's out of our system, we can focus on the fact that we saw yet another familiar character introduced to the game.

Okay, what was it with old-timey kids and mocking the bespectacled? Glasses harassment (glassrassment?) basically killed Myrtle, for Merlin's sake. Long story short, Myrtle went with us to the deathday bash, and now, any time we want to see a bunch of spirits and gross food, we can visit the Death Day Ballroom in the dungeons! It's like having a little Haunted Mansion inside Hogwarts, and we're here for it.

A selection of elegantly spoiled food waits in the wings in the Death Day Ballroom.

Ghosts mix and mingle in the Death Day Ballroom.

Ghosts dance across the floor – and through the air – in the Death Day Ballroom.

But let us shuffle off this immortal coil and back to the main story. You guys - a person exists whom Mrs. Norris does not despise.

This has to mean something more than just that Alanza Alves is an animal lover. Is she a secret feline Animagus? Is she the mole, and Mrs. Norris only loves evil people? Are her socks made of catnip? Feel free to jump in on this in the comments. We're going to move on to the most important thing that's happened lately: The Weird Sisters returned, and we couldn't wait to hear what they had to say.

Indeed. Anyway, Kirley's guitar had been confiscated by Argus Filch, official hater of all joy, and it was up to us to retrieve it. Filch ended up falling for the lamest excuse we've ever heard - we needed it to compose "The Ballad of Mrs. Norris"? - and handed the guitar over, at which point it was decided that a lakeside concert would come to pass.

Word up, Orsino. Speaking of sweet tunes, we were chosen to select the first song the Weird Sisters would play, and we were rather pleased with our selection.

As it turned out, so were the merpeople of the Black Lake, and they proceeded to welcome us into their murky depths with open fins. They have one condition, however, that must be met before they'll lead us to the next Cursed Vault: Their queen requires a necklace, a comb, and a lyre. What is this, an underwater episode of Let's Make a Deal? Fine. We're now working to track down the requested items, and we'll leave the recap there in order to avoid spoilers.

Oh, by the way - we also won the Quidditch Cup! Again!

Elsewhere, we currently have a Clean Sweep, House Pride, and Magical Milestones all running at the same time - try to contain your enthusiasm - with an aquatic-themed set of dorm furniture hanging in the balance. In addition, a Ukrainian Ironbelly is now up for adoption in the Scorched Vale section of the Magical Creatures Reserve, and... Yeah, he looks friendly.

There is essentially no new information to offer regarding Hogwarts Legacy, but that doesn't mean we can't address a few rumors and speculations.

Some gaming sites have posited the theory that the title could be of the multiplayer variety, and while that would be legendary, it doesn't appear to be the case. However, the messages on the game's official FAQ are a bit mixed in spots.

When asked what sort of game Hogwarts Legacy will be, the answer simply states that "Hogwarts Legacy is an immersive, open-world, action role-playing-game [sic] set in the 1800s wizarding world, which [sic] puts players at the centre of their own adventure."

However, a bit further down the page, the answer to queries about whether the story is original adds "single-player" to that description.

So while we can go on hoping for the chance to gang up on Dark wizards with an actual gang, it doesn't seem likely.

Meanwhile, we get a few tidbits of information in the developer's description of the gameplay:

Hogwarts Legacy is filled with immersive magic, putting players at the center of their adventure to become the witch or wizard they choose to be. They will grow their character's abilities as they master powerful spells, hone combat skills and select companions to help them face off against deadly enemies. Players will also encounter missions and scenarios that will pose difficult choices and determine what they stand for.

Also, when asked if players will be able to choose - and potentially change - their Hogwarts Houses, the answer indicates that there will be more details to share on this subject at a later time.

Hogwarts Legacy's official Twitter account has been sharing a few screenshots that offer glimpses of this game's incredible graphics, and you can enjoy three of them below. 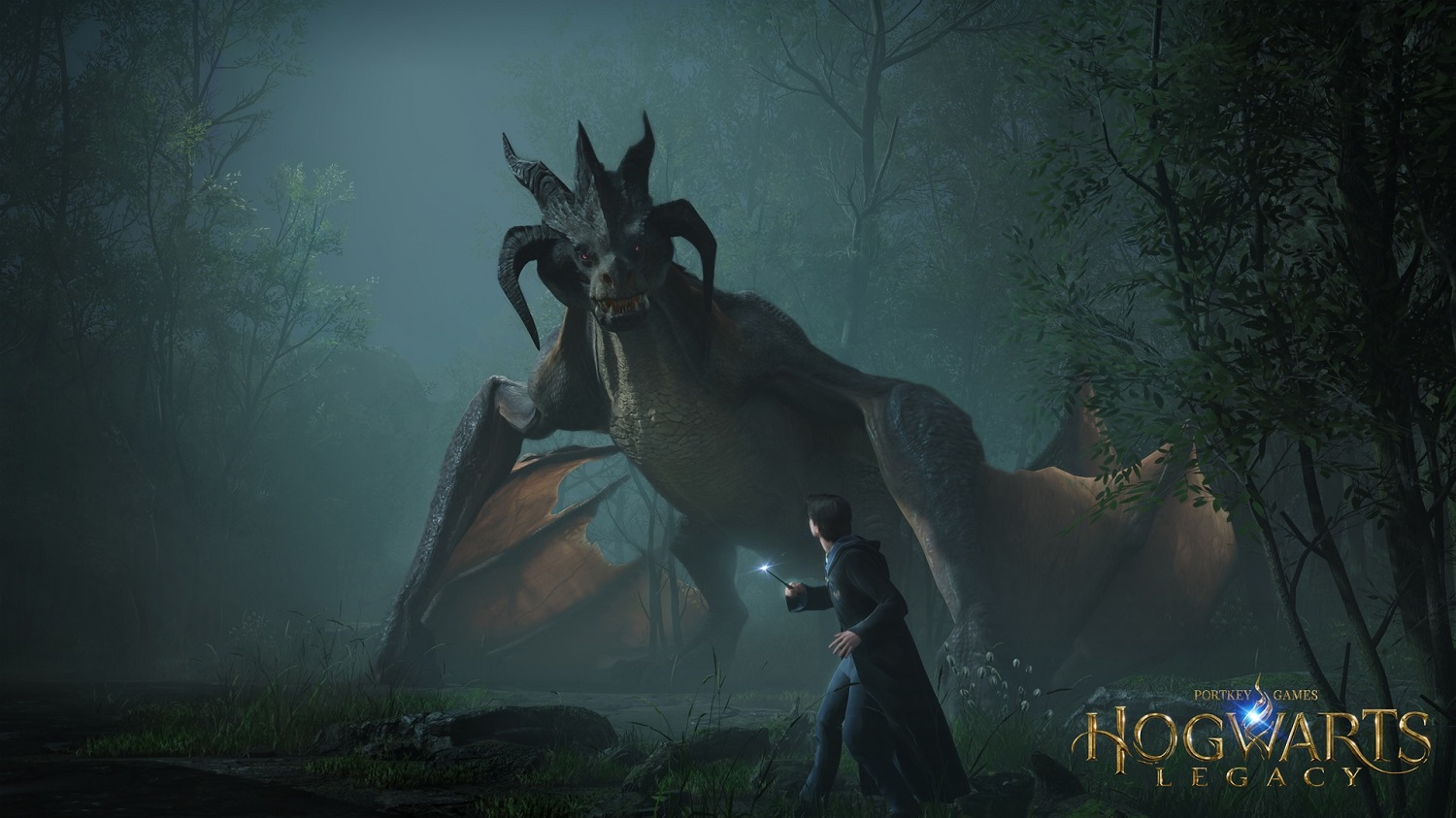 A character in “Hogwarts Legacy” prepares to face down a dragon. 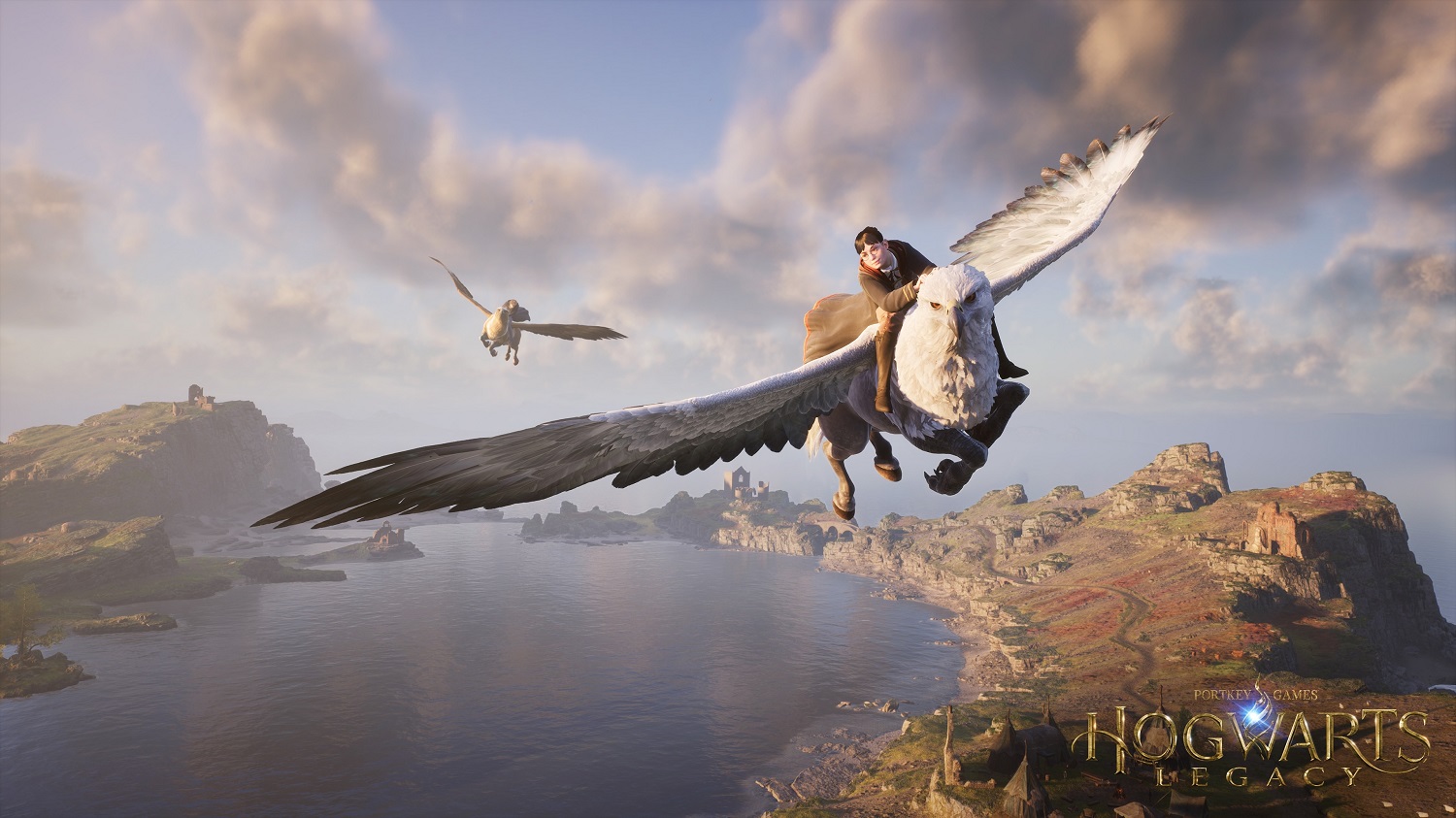 A character in “Hogwarts Legacy” enjoys a flight on the back of a hippogriff. 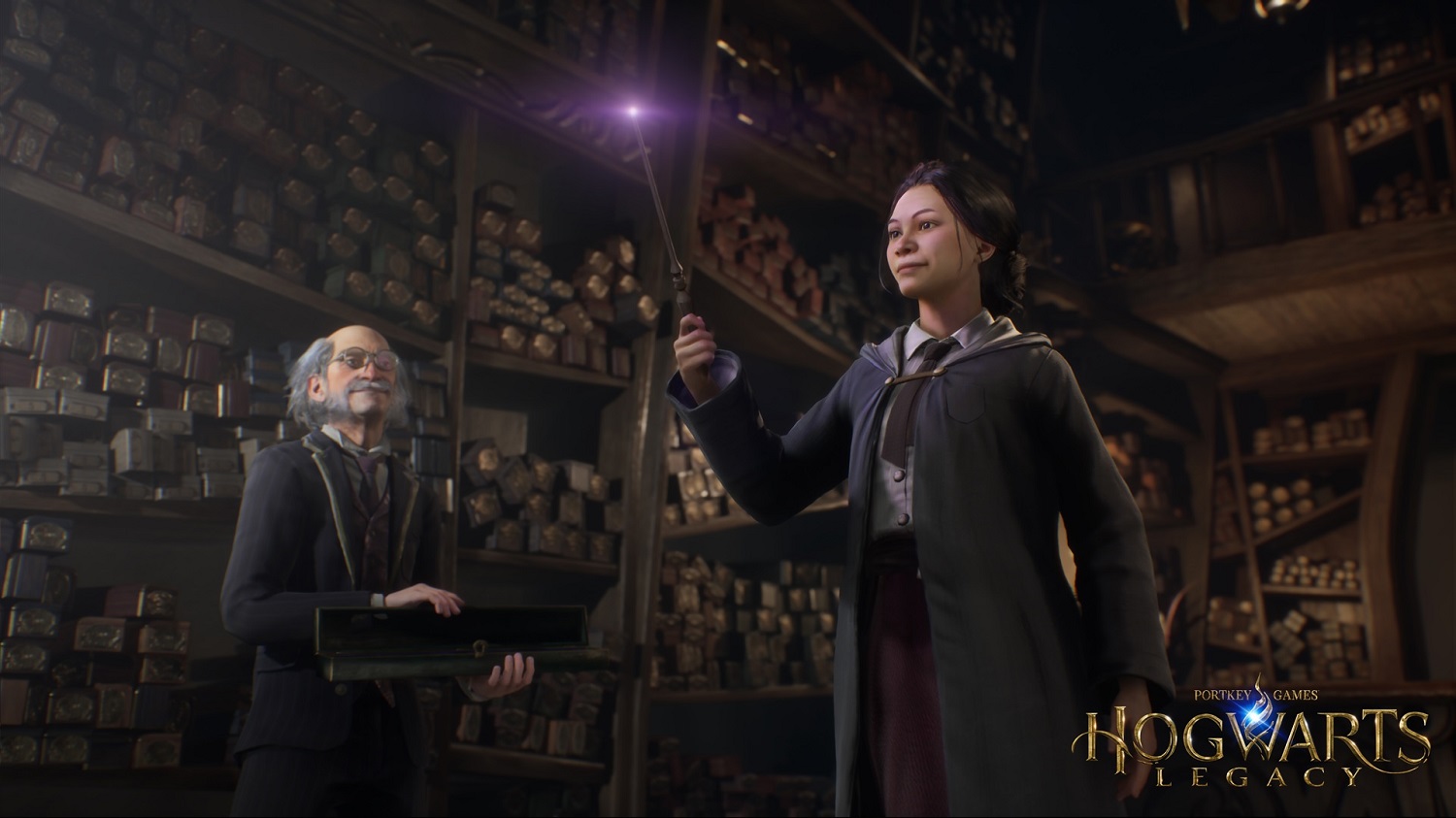 A character in “Hogwarts Legacy” is chosen by a wand.
Want more posts like this one? MuggleNet is 99% volunteer-run, and we need your help. With your monthly pledge of $1, you can interact with creators, suggest ideas for future posts, and enter exclusive swag giveaways!
Support us on Patreon