Most Harry Potter fans probably envy Newt Scamander his amazing job as a Magizoologist, but the good news is that you can take a walk in his shoes at the Fantastic Beasts: The Wonder of Nature exhibition, which is opening its doors to the public at the Natural History Museum in London, United Kingdom, on December 9. From Nifflers to Bowtruckles and real-world creatures like the oarfish and the peacock spider, you’re going to learn a ton about magical and real-world beasts alike.

MuggleNet got an inside peek at the exhibition before it opened to the public. Led by exhibition lead Louis Buckley and Head of Conservation Lorraine Cornish, the preview showed just how amazing the creatures are that live among us. Visitors will discover the ways in which the real and wizarding worlds intertwine and how the wonders of the natural world have inspired myths, legends, and the magical creatures we know from the wizarding world. 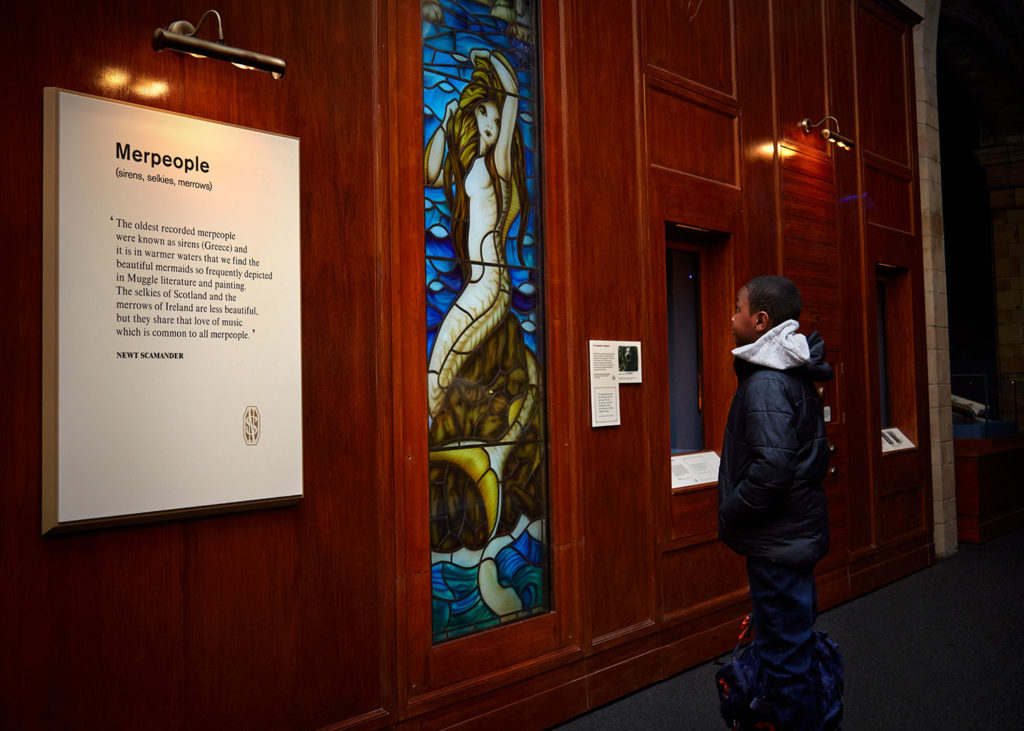 To give you an idea of what to expect, the exhibition consists of three zones, each one unique, with new opportunities to learn about magical and real-world beasts alike. In Zone 1, you’ll learn what inspired some of the most commonly known mythical creatures, such as dragons, unicorns, mermaids, and sea monsters. The exhibition features not only the dragon skull from the skeleton we see in Harry Potter and the Prisoner of Azkaban but also a dinosaur skeleton that was fittingly named Dracorex hogwartsia. It was discovered in the Hell Creek Formation in South Dakota in 2004, and Cornish delighted in the fact that it was named after the magical school. 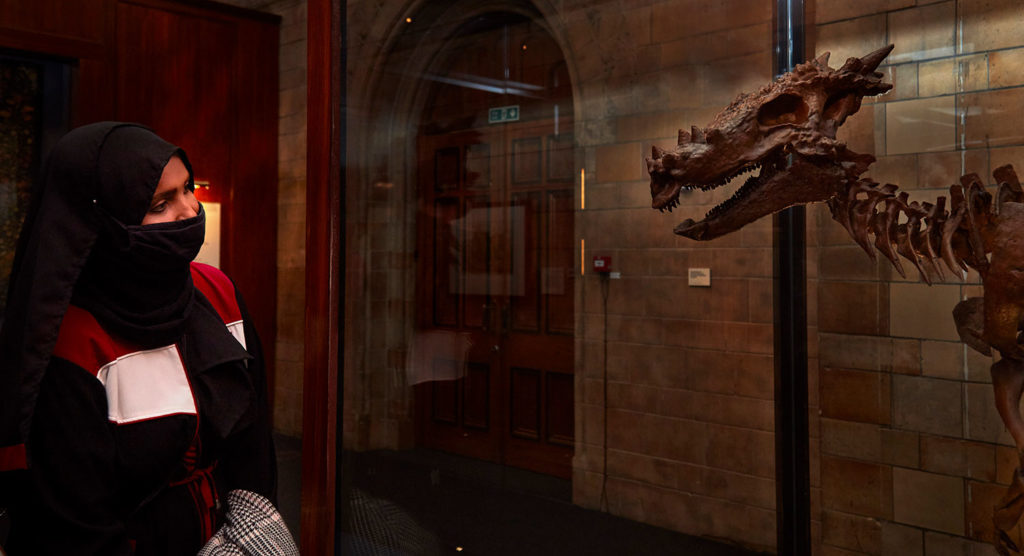 In Zone 2, the visitor embarks on a journey to discover the magical beasts from the first Fantastic Beasts film and learn more about their magical powers. This part of the exhibition features many animated pieces that allow the brave traveler to interact with the creatures from the film. To top it off, you will also learn about some real-life animals that share the same abilities. You can watch the Occamy being trapped in the teapot and learn which animals in the real world can also change their body sizes, like the marine iguana.

The exhibition does an excellent job of showcasing real-life fantastic beasts and how their characteristics can be found in the beasts of the wizarding world. The oarfish, for example, is thought to be the creature that inspired the myths and legends of the sea serpent. The skeleton showcased is about 13 feet (4 m) long, but these magnificent creatures can reach a length of up to 26 feet (8 m). Also keep an eye out for the smaller creatures, like the tiny peacock spider, which is the size of a grain of rice but stunning to behold due to its brightly colored abdomen. Its grand mating rituals are compared to that of the Erumpent. 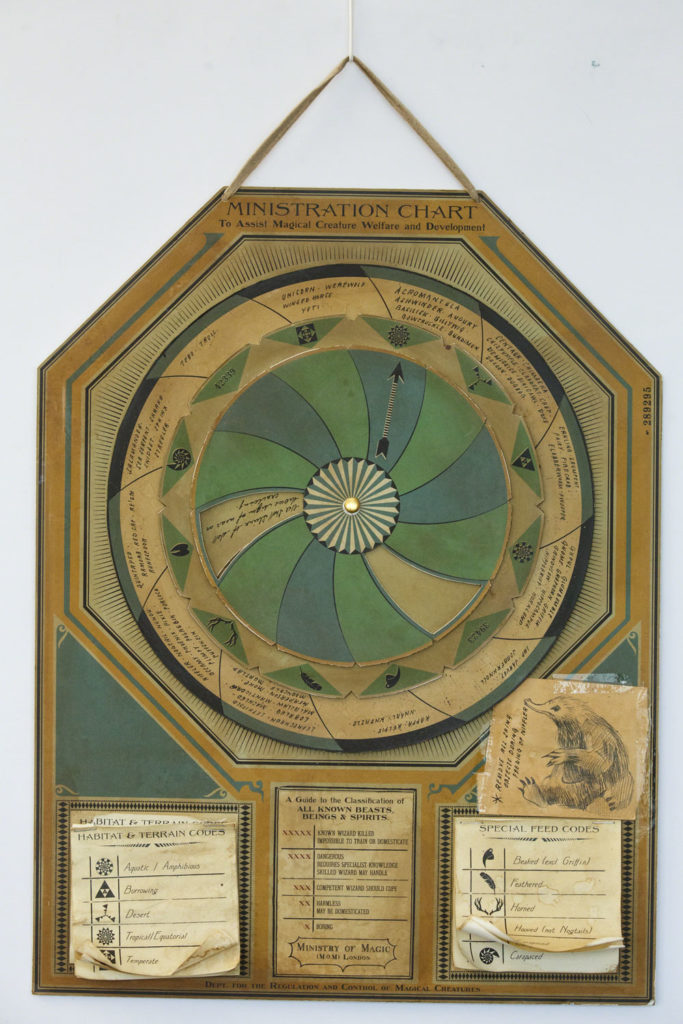 And lastly, in Zone 3, the visitor gets to step into Newt’s shed and learn about how to help endangered species and what you can do to protect the animals like the Sunda pangolin, one of the most trafficked animals in the world. Just like Newt houses the last remaining pair of Graphorns inside his case, the exhibition teaches visitors about the kakapo, a bird native to New Zealand, and how the country was able to save and monitor the flightless nocturnal parrot species due to an extensive breeding program in the last century. 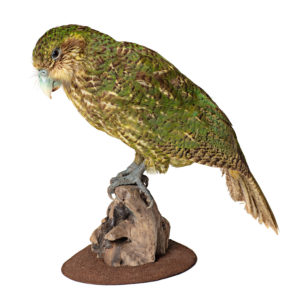 This exhibition is jam-packed with information and aims to inspire and educate visitors on the amazing animals we share our planet with and the part we can play in saving them. Hopefully, you’ll leave with a renewed sense of curiosity and an eagerness to save and look after animals in need. Tickets can be purchased through the National History Museum website, and if you are not in the UK, you’ll be happy to know that the exhibition does plan on traveling to other countries, although no dates have been confirmed as of yet.

If you’re interested in more details, we recommend you listen to the upcoming Episode 126 of SpeakBeasty. Our friends from the Protego Foundation also interviewed two of the creators behind the exhibition for Episode 13 of ProtegoCast.