While Muggles might think that the Ford Anglia is just an old car, Potterheads will utter phrases such as “flying car,” “it’s got an Invisibility Booster,” and “Whomping Willow.”

Arthur Weasley’s infamous illegally bewitched flying Ford Anglia had an important role in Harry Potter and the Chamber of Secrets. Fred and George first piloted it when rescuing Harry from the Dursleys; Harry and Ron then flew it to Hogwarts, crashing it into the Whomping Willow; and it later saved the two boys from Aragog’s family in the Forbidden Forest. 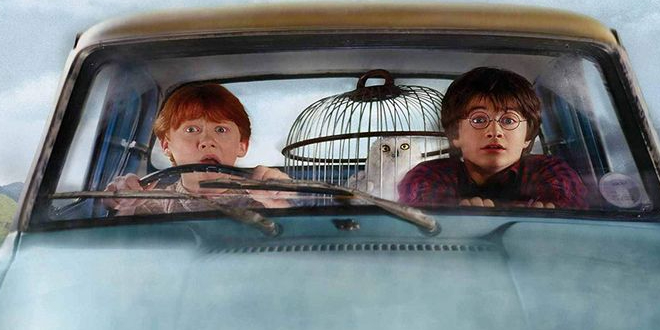 Back in 2019, film fanatics voted the flying Ford Anglia scene in the second installment of the Harry Potter film franchise the second-greatest car scene in all of cinema, so we searched the latest article on HotCars for some of the most magical facts about this enchanted car. Let’s take a closer look.

The model was launched in 1959, and it’s thought that Mr. Weasley purchased it before the 1963 redesign.

The fourth-generation Anglia featured some drastic changes. It was designed with American sedans in mind, with prominent and functional rear fins, and its swept-back nose indicated improved aerodynamics.

While the Anglia could reach 75 miles per hour on land, we are unsure of its maximum speed when airborne.

Mr. Weasley is well-known for collecting and bewitching an array of Muggle artifacts, including his Ford Anglia, which does not impress Mrs. Weasley.

Imagine a wizard buying a rusty old car and telling his wife all he wanted to do with it was take it apart to see how it worked, while really he was enchanting it to make it fly. (CoS, ch. 3)

Mr. Weasley’s enchantments included stretching the car’s interior, making it suitable for eight people and their luggage. He also added a flying charm and an Invisibility Booster in the form of a silver button on the dashboard. 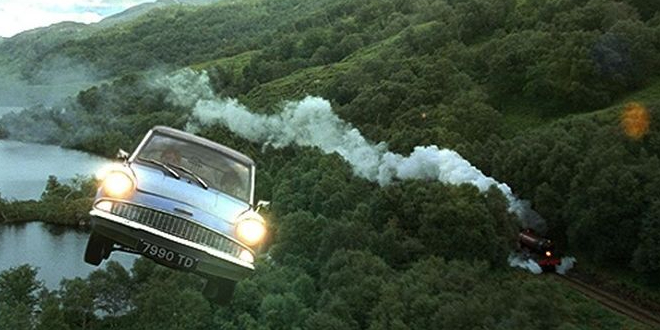 The film crew made 16 different cars.

Each version served different roles in various scenes within the film.

Some were hollowed out to make space for filming inside the car, while others hung from a gimbal to make it look like they were flying. Some were fitted with racing engines for high-speed scenes, and others were in various stages of being smashed up by the Whomping Willow or used as backdrops for interior shots.

Its fate within the franchise is unknown.

The last we see of the Ford Anglia is when it disappears back into the Forbidden Forest toward the end of Harry Potter and the Chamber of Secrets. When writing the final book, J.K. Rowling hinted that the Ford Anglia might make an appearance, but this didn’t end up happening.

The screenwriters of Harry Potter and the Deathly Hallows – Part 2 discussed including a scene where it emerged from the forest, saving Ron from the Death Eaters, but they abandoned this idea.

Many believe the car is still scooting around the Forbidden Forest or that it was discarded in the Room of Requirement, meeting a fiery end when it was set alight with cursed fire. 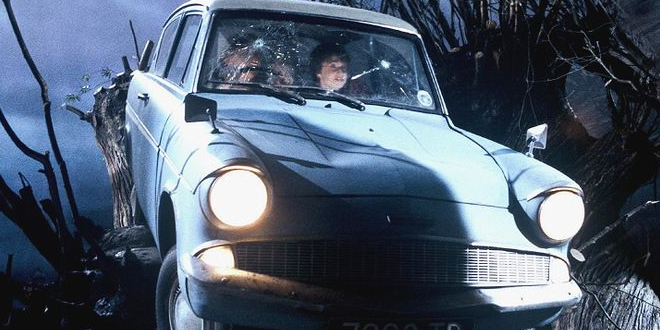 Harry and Ron crashing the Ford Anglia into the Whomping Willow

What happened to the replicas in the Muggle world?

In 2005, one of the replicas was stolen, only to be found six months later at a castle in Falmouth, United Kingdom. Sadly, another replica was stolen in 2019 and is yet to be found.

Singer Liam Payne paid a six-figure price for a replica that sits in his garden, while another is displayed at the Wizarding World of Harry Potter – Hogsmeade at Universal’s Islands of Adventure.

What was your favorite flying Ford Anglia scene? And what do you think it’s up to these days?