While many of this year’s awards season dates have been pushed back, Sundance Film Festival 2021 is running now as a mostly online event. Among the films premiering between January 28 and February 3 is Mass, Fran Kranz’s gripping new drama starring Jason Isaacs, the one and only Lucius Malfoy, first seen in Harry Potter and the Chamber of Secrets. Isaacs recently shared more about the immense work and skill that he and his castmates put into the film.

Mass tells the story of two sets of parents, played by Isaacs and Martha Plimpton (The Goonies, Frozen II) opposite Ann Dowd (The Manchurian Candidate, Collateral Beauty) and Reed Birney (In Your Eyes, Morning Glory), who are on different sides of a school shooting that involved their respective children, one as a victim, one as the perpetrator. However, you will not find a gruesome dramatization of the actual tragedy in Kranz’s movie. “This is a film that’s got nothing to do with school shootings,” Isaacs told Entertainment Weekly. “It’s about finding a way to talk to other people and see them as human — which has never been more current.” 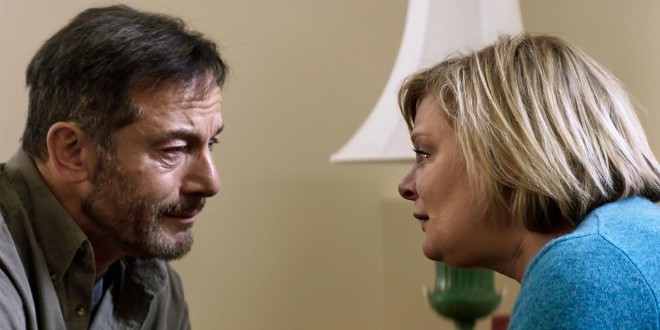 Although he has an amazing career behind him, Isaacs had to up his game as an actor on this film. “I was terrified,” he said about the experience of filming a movie that hangs on just four actors’ pure, raw, and unembellished skills.

Something very powerful happened on the page. So if it didn’t happen for the audience, it will be [the fault of] the actors.

Indeed, Isaacs even called the process a downright master class:

When we were shooting, it felt like — myself excluded — I was watching an acting master class. I’d look over at Ann Dowd, for instance, who would do a scene more devastating, more powerful, more haunting than I’d ever seen, [and] then she’d go, ‘That was bulls—, let me do that again.’ And she’d do it a completely different way. And that continued to happen all around me. It was a chance to jump in the ring with some top boxers.

Isaacs compared the cast to “archaeologists with a tiny brush” when he remembered their meticulous scouring of the script for clues about the characters’ hidden layers. He said the actors would sit in their hotel and analyze the screenplay over and over again, “trying to find any of the echoes across time or any nuances that might be referring to things that had happened in our life or things we had argued about or things we’d felt.” He emphasized the rarity of getting his hands on such a complex script:

A great piece of screen work is when a character says or does something, they mean something else entirely, [and] the audience knows that they’re actually driven by a third thing they don’t understand about themselves. That’s the holy trifecta. That’s what gave it its texture. I’m not generally used to writing that could sustain that kind of analysis. Like studying a great classic or something, the more layers [we] peeled back, the more we found.

There was some acting on the director’s part too. Isaacs praised Kranz’s approach to prompt analysis in his cast rather than having all the answers ready:

He [Fran Kranz] would pretend that we had found themes or echoes that he never intended in the first place and made us feel clever for discovering them. He let us find our versions of everything. When we said, ‘Well, what does this mean, exactly?’ he pretended he didn’t know, which is a very generous and creative thing to do — because of course, he knew the answer to everything.

Mass is having its initial premiere at the Sundance Film Festival on January 30, and it will be available for viewing widely at a later date that is yet to be confirmed.