UPDATED: Up for Auction: Rare “Harry Potter” First Edition That Sat on Bookshelf for Two Decades

A rare first edition of Harry Potter and the Philosopher’s Stone has been sitting on a bookshelf for more than 20 years, its owners unaware of its value until recently.

The hardback was given to a civil servant, now 68 and retired, and his family as a gift in 1997. He decided to get it valued by Hansons Auctioneers and after discovering that it could make £30,000 ($40,900), described it as “the most valuable present we have ever been given.”

When the book was first published in 1997, J.K. Rowling was a struggling single mother. Since then, over 400 million copies of her books have been sold, making Harry Potter the best-selling book series in history. Bloomsbury only published 500 copies of this rare hardback first edition; 300 were given to schools and libraries, and 200 were sold in book shops. 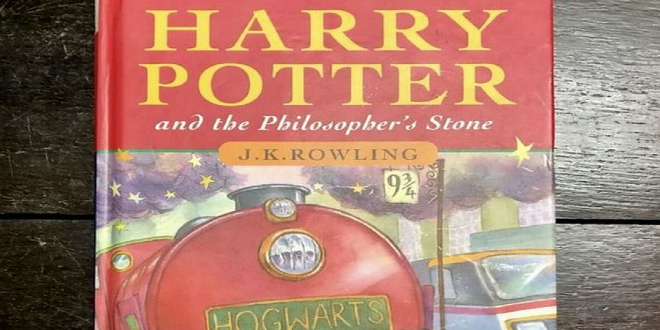 The owner of this rare book was living abroad on a Foreign Office posting when the book was sent to him from Yorkshire, England, in 1997.

He said the country’s historical ties with the United Kingdom were “not the strongest” and that there weren’t many opportunities to find English-language books for children. So when the copy of Philosopher’s Stone turned up, “it was a rare thing [to find] a novel-length children’s book with an intriguing storyline.”

The parent described how the family’s love for the Harry Potter books then began:

Our son was seven and our daughter four at the time. We had a family reading of it on holiday, a chapter at a time each evening before bed.

It was the start of a mini-tradition. The Harry Potter books tended to be published just before the summer holidays, so we took one away with us [each summer] for several years and read it together.

Of course, the children soon wanted to read for themselves, and our copy of Harry Potter and the Philosopher’s Stone is not only well travelled but [also] well[-]read.

He admitted that it’s lucky the book is in such a good condition because it almost met a watery fate.

It could have had a different kind of adventure, though, because our children like to read in the bath, and when our son heard our copy was a first edition, he said he was glad he had never dropped it in the bathwater.

Jim Spencer, Associate Director & Head of Books, Prints, Maps, Manuscripts & Ephemera at Hansons, said that finding another one of the original 500 hardbacks is “really special” and that he is “honoured” to be given the chance to handle one.

Spencer explained how common it is for him to be contacted regarding potential first editions of Harry Potter.

I receive hundreds of emails and calls from hopeful owners of Harry Potters all over the world, so it’s a little tougher having to let most people down gently – but I check every enquiry, respond to every person, because it’s like panning for gold.

This isn’t the first time Hansons Auctioneers has found a first-edition Harry Potter book. Last October, another first edition of Philosopher’s Stone was sold for a whopping £60,000 ($81,900), and a family in Lancashire, England, bagged £50,000 ($68,300) for their first edition in December.

It just goes to show how meaningful the Harry Potter franchise is because even damaged first-edition books have made money. In May 2020, a schoolteacher in Buckinghamshire, England, found three first editions discarded in the school dumpster, thrown away because they had been so well-read that they were no longer in good condition. The two paperbacks made £3,000 ($4,090) and £3,400 ($4,640), and the hardback, which wasn’t expected to make much due to damage to the binding, made an incredible £33,000 ($45,000).

Have you ever wondered if you own a first edition? Check out the video below to learn how to tell whether your version of Harry Potter and the Philosopher’s Stone is one of the first editions.

The first-edition hardback of Harry Potter and the Philosopher’s Stone has sold for £40,000 – exceeding all wildest expectations by up to £20K.

Most valuable gift ever! But family’s Harry Potter first edition could have made splash in the BATH!! 🛀

The first editions have a black review banner on the bottom, an unknown wizard with a reddish-brown beard on the back cover, and an error on page 53 of Harry’s school shopping list, with “1 wand” listed twice. For more telltale signs of a first edition, check out the video above.