A seven-year-old boy has put out a moving video message to raise funds for his girlfriend with cancer. Codi Clark from Chelmsley Wood, England, and his childhood love Edie Pope, also seven, have been inseparable since nursery school. Knowing she is a big Harry Potter fan, Clark has announced that he will perform various challenges to raise money for two purposes: firstly, to give Pope the chance to visit Warner Bros. Studio Tour London – The Making of Harry Potter and secondly, to raise money for Kids Cancer Charity.

Little Edie Pope is a big Harry Potter fan. Clark previously saved up his Christmas money to buy her a Harry Potter blanket, a pillow, and some treats. “I think Codi is amazing,” Edie’s mother, Kerrie-Anne Pope, 43, said. “They’ve been really close since nursery when they were three. What ever [sic] class they are in, even if teachers try to separate them, they always end up sitting next to each other.” Codi’s mom, Julie Clark, 32, also agrees that the children are great for each other: “It’s like a match made in heaven at seven years old,” she told BirminghamLive. “You literally can’t write it. They are both courageous [and] strong-minded, and they just bounce off each other. Their birthdays are also a day apart in July.” 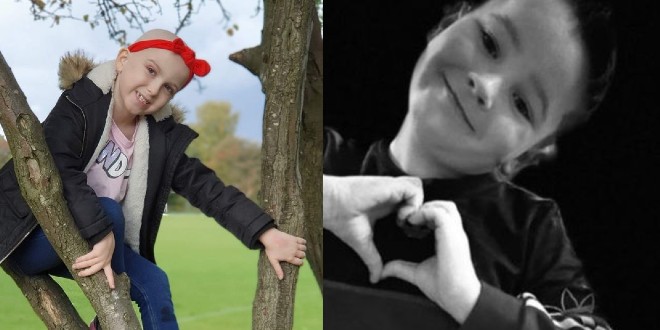 Edie Pope (left) and Codi Clark (right) have been inseparable since nursery.

However, since Edie Pope was diagnosed with Ewing sarcoma, a rare bone cancer, in her pelvis, her priority has been her treatments. She has had nine rounds of chemotherapy at Birmingham Children’s Hospital, and she is currently having proton beam therapy over six weeks at a hospital in Manchester. She will continue with further chemo and will require surgery to have the tumor removed. Her treatment is expected to last up to nine months.

Her supportive boyfriend has been keeping her spirits up, keeping in touch via FaceTime, and encouraging her to take her medications. He was in shock when he first learned of her diagnosis, and he is now hoping to raise funds to help her in the best way he can, by treating her to a Harry Potter trip, which he announced in a video message:

You know how last year, when COVID hit the world, I found out something that broke my heart? My girlfriend ended up catching cancer. I would like all the people watching this video to send me weekly challenges so I can raise money for her, so she can treat herself to maybe ‘Harry Potter’ world, a spa day, or whatever she likes. Also, I’d like to raise money for a cancer charity to help other unfortunate people who have cancer.

This, Clark will achieve through sponsored challenges. He will grow his hair until his girlfriend is given the all clear and only then shave it. He will don a tutu and take part in his auntie’s virtual Zumba class. He is also planning to wear a dress and pink socks for a five-mile bike ride at Sheldon Park, Birmingham. Furthermore, he has created a GoFundMe page, which has raised over £4,000 ($5,400) for his cause so far.

We wish Edie Pope a full recovery. Please spread the word about this fundraiser so that she can visit the studio where the magic happened, and to support children battling cancer.