Through the Eyes of a Weasleys’ Wizard Wheezes Employee: Letter 1 – An Odd Interview

After extensive research, charm, and persuasion, a MuggleNet writer has finally acquired these original letters written by none other than the very first Weasleys’ Wizard Wheezes employee. For all mischief loving witches and wizards, please enjoy this first letter. 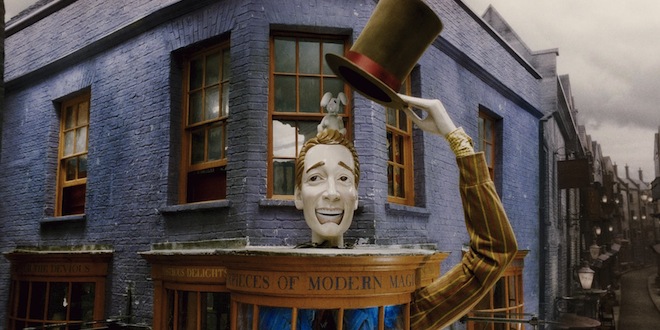 You will not believe the job interview I had this evening!

I am back in England after a year of travel, and I arrived at the Leaky Cauldron with hair so ratted and robes so tattered a plump old witch took pity on my bedraggled state and bought me a bowl of soup. I spent the rest of the evening stumbling around a drizzling Diagon Alley, searching for the cheapest room I could rent for the night.

That is when my socks were knocked off.

At first, I thought the two objects in the sky were red hairy Bludgers. I realized a second later the red hairy Bludgers were actually redheaded boys. They came careening down onto the cobblestone road of Diagon Alley. Both boys rode broomsticks; one of which, bizarrely, had a metal chain attached to the end.

They dismounted, stared at the shops around them, and let out a loud whoop of celebration. Both boys began walking purposefully down the lane with broomsticks hitched over their shoulders.

I hesitated, then followed them. I rounded the corner and froze, completely dumbfounded. Arty, there is a new shop in Diagon Alley. A shop like nothing I have ever seen before. I saw it on this grey evening, and it lit the town up like an explosion of Filibuster’s Fireworks. The building stretches high into the sky in a compendium of oranges and purples. Posters of all shapes and sizes are pinned to the windows, advertising things called “Skiving Snackboxes” and “Portable Swamps.” A joke shop! A joke shop blowing Zonko’s out of the cauldron!

I was vibrating out of my boots with excitement. You know me well enough to recognize a store absolutely perfect for me. The tinkling of a bell brought me back to my senses. I tore my eyes away from the magnificent building just in time to see the two boys enter the joke shop. No longer overly concerned about being spotted, I raced closer to the structure. The door was locked. A sign over the entrance said “Opening Soon” in slanting letters. I craned my neck to try and see past the posters on the window and into the store. I couldn’t see much, but I did spot dozens of shelves towering to the top floors. Zigzagging stairs led to multiple levels. Multicolored boxes were already stacked in corners, waiting to find their places on shelves. I suddenly wished I was not poor as a house-elf.

As if on cue, the door to the magnificent shop flew open, and one of the boys stepped out, leaning against the door frame and staring at me.

“Apologies for bothering you,” he said. “But are you by any chance familiar with the magazine Wobbles for Wizards?”

I replied that I was, in fact, very familiar with this magazine.

“I knew it!” he yelled. “I recognize the hat you’re wearing.”

Since you are the golden child, Arty, I know you do not understand this reference. In Wobbles for Wizards (a prank magazine), their logo is a pointed blue wizard’s hat. I told the boy how a reporter had given it to me after an interview in Egypt. I watched his eyes widen.

“You’re that witch who rode a fully grown bucking Bicorn through a pyramid, aren’t you?”

“Yes. That’s me,” I replied, standing up a little straighter and adjusting my hat.

The boy promptly turned and rushed back into the shop. I stood there, hesitant.

A second later, he came bursting back out with the other boy, who looked completely identical to his counterpart.

They kicked a box out of the way, which promptly exploded, to let me in. Neither boy batted an eye and stomped on the smoldering box to put out the flames.

Then, the interview began.

They asked me about my explorations abroad. I explained how I had helped with a traveling roadside potion stand. I told them about the various adventures and bits of mischief I had encountered on my journeys, and now that I was home, I needed a job. I mentioned hijacking Uruguay’s rival Quidditch team by replacing every tail twig on all seven broomsticks with live and angry Bowtruckles. This seemed to excite George so much he leapt out of his seat and yelled, “You came up with the Uruguay takeover?” That’s when I knew I had this job in the bag.

I write this letter to you while I am tucked away under a moth-eaten blanket in the back of the best joke shop I have ever seen.

I hope you are doing well, and I hope I can see you on your next Hogsmeade trip now that I am back. Hopefully, that Umbridge character you were telling me about is not causing too much grief. I will write again soon!

Love from your sister,
Verity