Have you ever wondered what a Minecraft version of Hogwarts School of Witchcraft and Wizardry would look like? Wonder no more, because YouTube content creator Planet Dragonod has created a breathtaking version of the Harry Potter film franchise‘s iconic school for witches and wizards.

The popularity of the video game Minecraft, which allows users to build 3D structures and earthworks using blocks, has been driven by content creators on the likes of YouTube and Twitch, who stream their creations to their millions of viewers, enhancing its online community.

The Hogwarts castle’s interior is “not quite ready yet,” but Planet Dragonod decided to film a tour of its exterior, highlighting the progress he has made on his creation during the past year.

Thanks to the immaculate attention to detail, if it weren’t for the squared-off landscape surrounding the castle (which Planet Dragonod commented on, saying, “It does need some work. It’s definitely not 100% complete. Obviously, some of the landscaping is very, very rough”), you would probably think you were watching real-life, long-shot footage from the Harry Potter films. 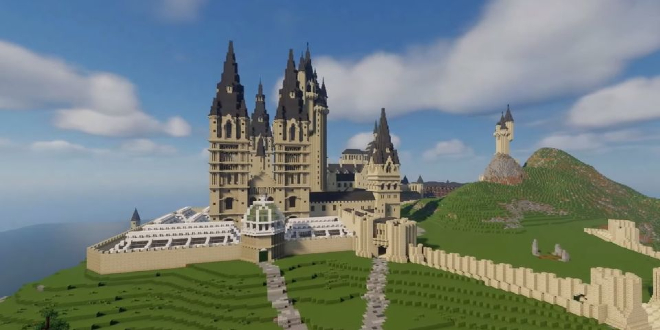 Planet Dragonod decided to base his version of Hogwarts on the Harry Potter films and video games rather than the book series, making it easier to compare the visuals from the different pieces of footage to his project.

The detailed river landscape that surrounds the Quidditch pitch was inspired by the visuals shown during Buckbeak’s flight in Harry Potter and the Prisoner of Azkaban. The area called “the quad” was only ever shown in overarching shots in the films, making it difficult to build, but thanks to some good angles shown in the video game version of Harry Potter and the Order of the Phoenix, Planet Dragonod was able to build a simplified replica.

Other parts of Hogwarts that can be spotted during the video tour include the boathouse and its staircase, which was “an absolute pain to make; all these awkward angles and all these different elevations made it very, very hard to make.” You will also notice the North Tower (where Harry’s Divination classes took place), Hagrid’s hut, the Whomping Willow, the Astronomy Tower, and the Quidditch pitch.

Not only does Planet Dragonod manage to enthrall you with his immensely complex Hogwarts exterior, but he also provides some interesting Harry Potter facts along the way, including some fascinating information on the inspiration for Hogwarts’s design and facts about the structural features of the castle.

Planet Dragonod isn’t the first to build magical Harry Potter structures within Minecraft. Others have also created Harry Potter-themed modifications on the game, and there is a Minecraft server called Dumbledore’s Army that allows users to be Sorted into their Hogwarts House, play Quiddich, and visit magical locations, including platform nine and three-quarters, the Burrow, and Diagon Alley.

Planet Dragonod also hopes to release a free world download of his castle once it is complete, but in the meantime, you can follow the progress of his version of Hogwarts by watching his livestreams and learn how to build other magical Harry Potter places using his video tutorials on his YouTube channel.

Have you been inspired by Planet Dragonod’s impressive work? Are you looking forward to seeing his completed version of Hogwarts?