In 2014, the author of our beloved Potter series admitted to being unnerved by the attention and admiration that one particular character of her creation was receiving. J.K. Rowling expressed her concern about her female fans’ tendency to romanticize the Hogwarts bad boy Draco Malfoy, and while I agree that Draco Malfoy is not the most pleasant of characters, I was slightly put off by her comment that he did not deserve a redemption arc in the main book series. 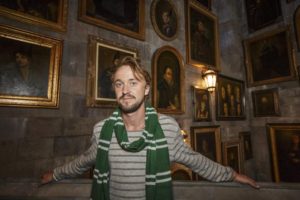 As many will likely agree, a great deal of the admiration that Draco Malfoy receives comes down to the attractiveness of the talented Tom Felton, who portrays the character in the movie adaptations. Additionally, with the vast content of the books, it is sometimes easier to recall the events of the movies, and as with other aspects of the books, much of Draco’s nastiness is cut from the films, making it easy for fans to feel more sympathetic toward him.

However, that being said, I still believe that Draco Malfoy deserves much more respect and sympathy as a character, starting from even earlier in the series than Harry Potter and the Half-Blood Prince: 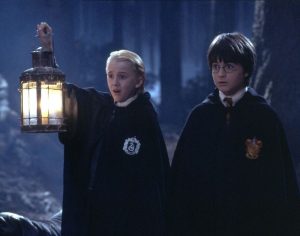 One thing that I think is important to note is that, when we are reading the books, we are seeing things from the perspective of our lead protagonist, Harry Potter, and therefore – much as we do with Snape and other characters alike – we allow our opinions of a character to be influenced by what Harry himself thinks or feels about them. Therefore, when Harry makes the observation that he was “strongly reminded of Dudley” (SS 77), we as the readers associate him with an already unpleasant character.

Of course, Draco proves himself to be just as much a spoiled bully as Dudley is – if not more – and it is not until Harry Potter and the Chamber of Secrets that we get a glimpse into Draco’s familial background. After being introduced to his father, Lucius Malfoy, we are finally able to gain some understanding as to why Draco may behave the way he does. The influence of his family plays a large part in shaping Draco as a character as well as the expectations and labels placed upon him – making Draco a victim of a different type of prophecy than Harry is: the self-fulfilling prophecy. 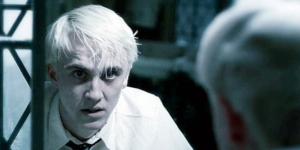 The expectations of Draco are not something we take into consideration as a reader until Half-Blood Prince when Draco is made a Death Eater, tasked with mending the Vanishing Cabinet and killing Albus Dumbledore on Voldemort’s orders. Due to Harry’s suspicion of Draco, his character becomes a focal point of the novel, and Rowling provides a glimpse of the more vulnerable side of the young Slytherin. I can’t help but compare Draco to the young men who fought in the First World War during my series re-reads, eager to join the fight and boastful until the reality of the situation sets in. Throughout Half-Blood Prince, we see Harry notice Draco’s deterioration as the stress of his assignment begins to prove too difficult for him to achieve. Dumbledore himself even points out to Draco how little he seems to be trying to achieve his goals toward the end:

Forgive me, Draco, but they have been feeble attempts.… So feeble, to be honest, that I wonder whether your heart has been really in it.” (HBP 585) 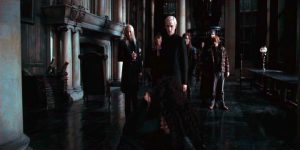 Draco’s reluctance continues into Harry Potter and the Deathly Hallows where we next see Draco when Harry, Ron, and Hermione are captured by Snatchers and taken to Malfoy Manor.

Harry saw Draco’s face up close now, right beside his father’s. They were extraordinarily alike, except that while his father looked beside himself with excitement, Draco’s expression was full of reluctance, even fear.

‘I don’t know,’ he said, and he walked away toward the fireplace where his mother stood watching.” (DH 459)

I believe it to be heavily implied that Draco did, in fact, recognize Harry in the book; however, it is in the movie that we see Harry confronting Draco when the two face off in the Room of Requirement and Harry asks Draco:

Why didn’t you tell her? Bellatrix. You knew it was me, but you didn’t say anything.

Of course, Harry’s question in the film goes unanswered, and it is up to the audience to decide why Draco remained silent about Harry’s identity. However, I believe that it is this silence that speaks volumes to Draco’s character, highlighting for the audience his inner battle between fulfilling the expectations put upon him, keeping his family safe, and doing what he knows to be right. I believe that Rowling could very well have been able to write a fitting redemption arc in which Draco switched allegiances prior to the redemption he was allowed in Harry Potter and the Cursed Child. 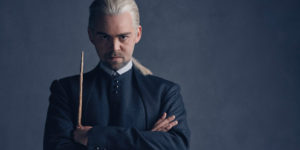