Muggle quidditch appeared in one of the episodes of Bradley Walsh & Son: Breaking Dad recently, when the father and son team traveled to Slovenia and played with the local Muggle quidditch team.

Bradley Walsh is an English former professional footballer, comedian, and actor who has appeared on Coronation Street, Law & Order, and recently, Doctor Who. He and his son Barney Walsh have their own show on ITV where they travel through different countries. In Episode 4 of Season 3, which aired earlier this month, they traveled through Slovenia and discovered quidditch in the capital city, Ljubljana.

After his son mentioned that they would be playing quidditch with Slovenia’s national team, Bradley Walsh commented that quidditch doesn’t exist. Learning that the sport really does exist, Bradley and Barney tried to play quidditch against each other on opposite teams. Barney caught on quickly – even scoring a few goals – and showed promise as a quidditch player, but Bradley was confused about what was happening and was off his broom often.

A clip from the episode was shared to Facebook by one of the players on the Aemona Argonauts, who were featured in the episode itself.

They both realized how serious and difficult it is. The Slovenian national coach explained to them that it is a sport and that most of the players don’t even like Harry Potter. This is very common among those in the Muggle quidditch community because they want to be taken seriously as a sport and not as something similar to LARP (live action role-playing).

Despite this, Bradley appeared on the pitch wearing a Gryffindor uniform with a wand and shouting incorrectly, “Expenso Patronum!” His son had to convince him to try to play seriously again.

Dad, you’re embarrassing. Get off. Where’s your broom?

After Bradley changed into the Slovenian jersey again, they both tried to catch the snitch as seekers. Bradley was the one who finally caught the snitch, but he was off the broom at the time. In an official game, “The catch is not good.” 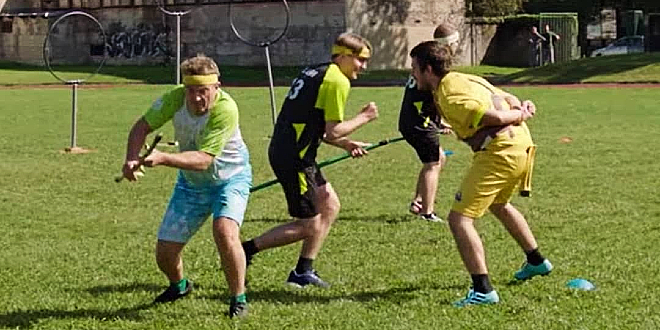 Bradley Walsh (left) is shown in a Slovenian quidditch jersey, while his son, Barney Walsh, is shown in the center in an Aemona Argonauts jersey, facing a snitch runner.

Because Slovenia only has one quidditch team, the Aemona Argonauts, the team’s players also play for its national team. As a result, the Aemona Argonauts would not normally be able to participate in the European Quidditch Cup (EQC) but are allowed to do so. The team was supposed to participate in Division 2 of EQC 2020 before its cancellation and will hopefully regain that spot for EQC 2021.

A promotional image from the Aemona Argonauts’ EQC D2 2020 qualification is shown.