As MuggleNet informed you in January, Sir Kenneth Branagh will be stepping into the shoes of United Kingdom prime minister Boris Johnson for This Sceptred Isle, and we now have a first-look image to go into mild shock over. We truly can’t even tell it’s Branagh. Get a better look at it under the Harry Potter toggle below. Elsewhere this week, we have a trailer for you from Jim Broadbent‘s latest film and new projects on the horizon for Zoë Kravitz and Callum Turner. Steel your nerves for that photo of Branagh, and read on for all the latest info! Castium Revelio!

Who wants to talk politics?! Generally, no one except your drunk uncle, but as MuggleNet let you know in January, Sir Kenneth Branagh (Gilderoy Lockhart) has signed on to portray UK prime minister Boris Johnson in Sky drama This Sceptred Isle, and Variety shared a first-look image of Branagh in the role last week. Remember when we gave you that first look at Brendan Gleeson (Mad-Eye Moody) as Donald Trump in The Comey Rule? This is nearly as terrifying. 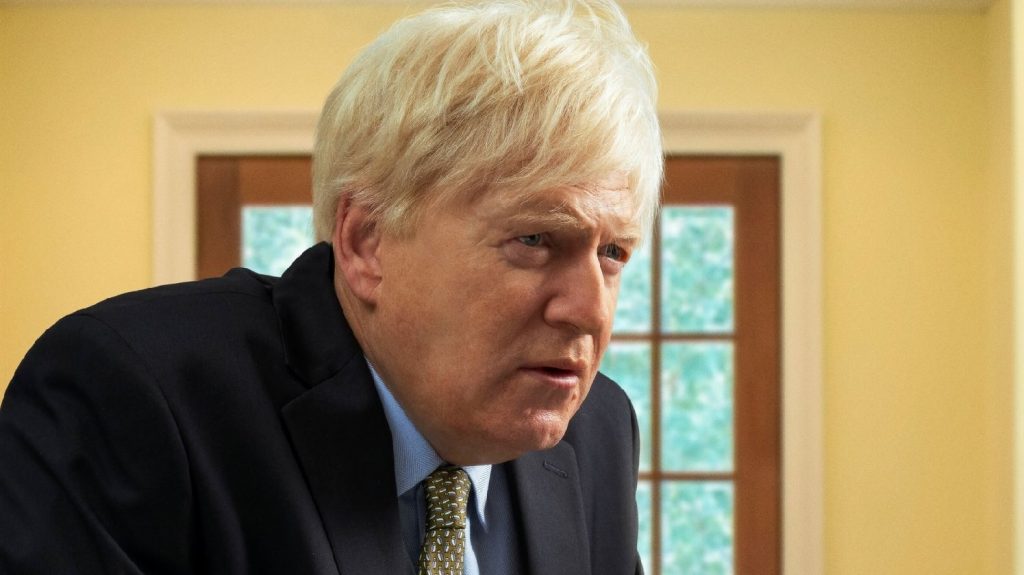 This Sceptred Isle will follow the events surrounding the first wave of the global pandemic in the UK and promises to tell, Variety says, "the tale of some of the most devastating events to ever befall the United Kingdom and of a Prime Minister leading in these unprecedented times." It's expected t air on Sky Atlantic and streaming service NOW TV in 2022, so we'll keep an eye out for a date.

If you're anything like us, you love Rhys Ifans (Xenophilius Lovegood) and with good reason – he's a great guy. We now have another reason to add to that list: Ifans has been throwing his support behind youth in the town of Blaenau Ffestiniog, Wales, during the pandemic, and in honor of that support, a local facility providing creative training for young people has named its new cinema screen after the actor. CellB unveiled Rhys Ifans Sgrin 2 during a livestream event and says the screen will help Welsh youth broaden their horizons with a wide range of free creative arts and media workshops.

Such workshops were forced to move online when the pandemic struck, but Ifans stepped in to offer special Q&A sessions with the young creatives, forming, News from Wales says, "a lasting mentorship and inspiring them to create their own videos, as well as committing to support future creative projects for the youths." Ifans says he's honored to be part of the project:

It is a great honor to be part of such an exciting initiative. The CellB team and Gwallgofiaid is a great example of a community pulling together to create a safe and creative space for the young people of the area. Having a Welsh-born actor opening a cinema screen in collaboration with the local youth project perfectly encapsulated the ethos behind CellB's new venture. It's a special mix of community-focused concern and forward-thinking innovation, whilst also following guidelines to keep everyone safe.

The Paley Center for Media has announced its full programming lineup for PaleyFest LA 2021, which will be an all-virtual event this year. Deadline Hollywood reports that the selections will include first-time entries Lovecraft Country, starring Wunmi Mosaku (Beryl, Fantastic Beasts), and The Queen's Gambit, starring Harry Melling (Dudley Dursley). Content from the festival will be available for viewing online beginning on Friday, March 26 for Paley members and anyone with a Citi credit card. The general public will then be able to join in beginning on Tuesday, March 30 via the Paley Center's YouTube channel.

Another new Sky original drama – Six Minutes to Midnight – will be available to stream on Sky Cinema on March 26, and a new trailer was released this week to give us a taste. Starring Jim Broadbent (Horace Slughorn), Dame Judi Dench, and Eddie Izzard, the film – inspired by true events – is set in August 1939, 17 days before the start of World War II, and follows the story of an English teacher who disappears from a coastal boarding school with 20 German teen girls. Broadbent plays Charlie. Enjoy the trailer below, and we'll let you know when a United States release date surfaces!

We can barely remember March 2020 either, but apparently, we let you know that Netflix had commenced filming on a new Sherlock Holmes spinoff centered around the Baker Street Irregulars. Little did anyone know that filming would un-begin for pretty much everything soon afterward, but we're happy to report that The Irregulars has persevered and will now premiere on March 26 on the streaming service. The role of Sherlock Holmes will be played by Henry Lloyd-Hughes (Roger Davies), and the actor spoke with SFX Magazine about the role:

Sherlock is a mysterious and malevolent presence in the shadows – at least to begin with. It should be a surprise to viewers how much he is – or isn't – going to play a part. When we do meet him, he's not what the characters expect. We're attempting to give a version of Sherlock that people haven't seen before. Time jumps in the show, to [show] someone who was once a genius and yet is clutching at straws. Is any of that genius left in the shell? [...] My character's legacy, good or bad, unravels throughout the series. It's also not a spoiler that the show takes place at different times. The story, as we meet our characters is in a London that's fallen into complete disarray. It has a nightmarish, apocalyptic quality. There's the Sherlock of that present and what we see in flashbacks, which is the Sherlock of old – or young, if you see what I mean.

You can check out some stills of Lloyd-Hughes as Holmes below, shared by the actor via Twitter.

So excited to share the first look of my Sherlock Holmes in The Irregulars coming to @NetflixUK on March 26th. You’re all in for an absolute ride!! https://t.co/wP92PJ0ldk

Those familiar with Band of Brothers, the 2001 war miniseries created by Tom Hanks and Steven Spielberg, will be pleased to know that a follow-up is in the works. Deadline Hollywood says that Masters of the Air is "gaining some series momentum" at Apple Studios, with Callum Turner (Theseus Scamander) and Austin Butler in talks to star. The new series would follow the "true, deeply personal story of the American bomber boys in World War II who brought the war to Hitler's doorstep." Turner would portray Major John Egan. We'll keep you posted!

Steven Soderbergh has signed on to direct New Line Max Original film KIMI, Deadline Hollywood reports, and Zoë Kravitz (Leta Lestrange) is tabbed to star. The movie will premiere exclusively on HBO Max because what doesn't premiere exclusively on another streaming service you have to pay for these days, and in lieu of any other information on this freshly announced project, we have a synopsis!

The film follows an agoraphobic tech worker who discovers recorded evidence of a violent crime during an ordinary data stream review and tries reporting it up the chain of command at her company. Meeting with resistance and bureaucracy, she realizes that in order to get involved, she will have to do the thing she fears the most – leave her apartment.

That’s it for this week’s edition of Casting News. Tune in next time for more on your Wizarding World favorites, and let us know in the comments which projects you’re most looking forward to!