For the Love of Mothers: Molly Weasley Honored as Good Mom on Mother’s Day Tier List

A mother’s love is something incredibly sacred and should never be taken for granted. Fans of the Harry Potter series should be very familiar with it since it is one of the most prominent themes of the book and movie series. After all, it is a mother’s love that saves Harry’s life twice.

Since Mother’s Day takes place on March 14 in the United Kingdom this year, the greeting card marketplace thortful decided to celebrate it by creating a tier list of maternal characters in TV and movies. This particular tier list ranks on-screen mothers based on their popularity. Among the many mothers of media, our beloved Weasley matriarch, Molly Weasley, managed to make the list.

The tier list was created using a marketing tool called Linkfluence Search that combs through social media to track marketing trends. For this tier list, thortful used the tool to find the most-mentioned media mom for a 12-month period from February 11, 2020, to February 9, 2021. It looks like the tool ended up searching through the social media accounts of Potter fans because Molly had more than 50,000 mentions to make the Good tier, the second-highest ranking. We can partially credit her popularity to the dazzling performance of Dame Julie Walters, who played Molly Weasley in the Potter films. 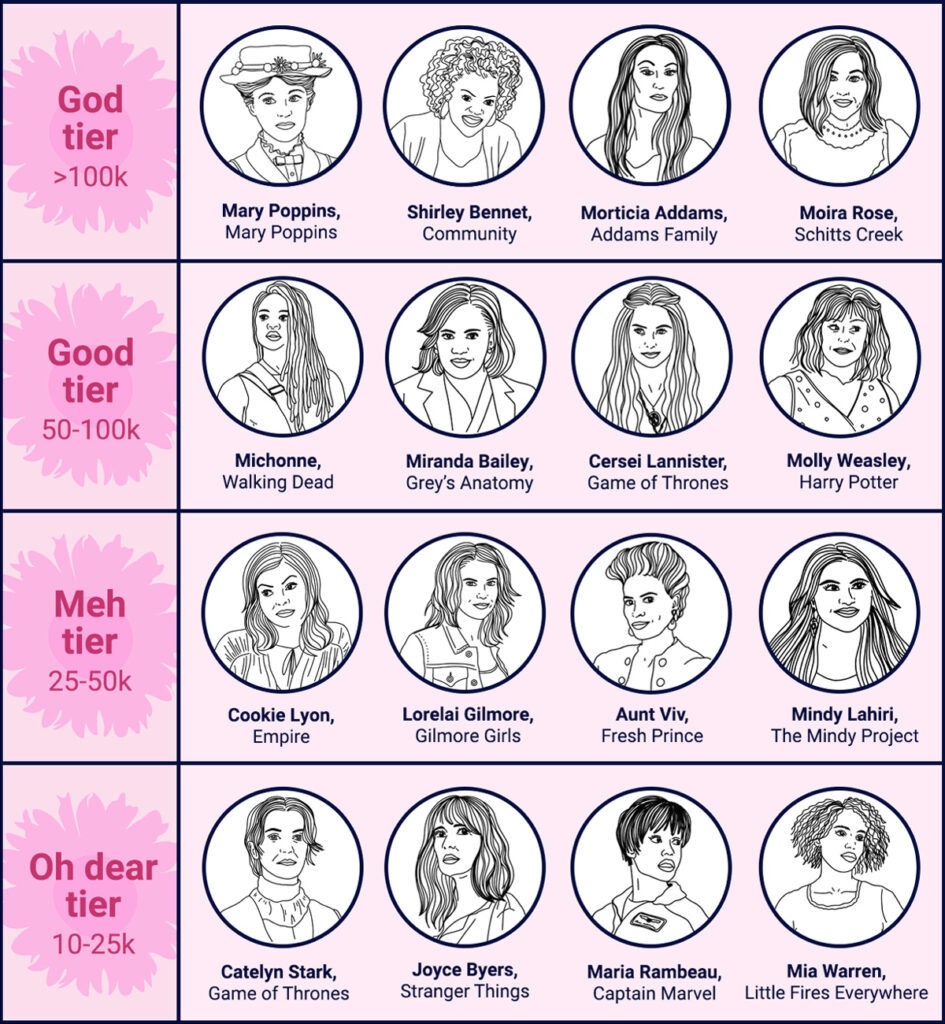 On a new tier list of popular mothers of TV and film, Molly Weasley was ranked in the second-highest tier.

As Potter fans, we all know just how wonderful a mother Molly really is. In the series, Molly very quickly and unconditionally accepted Harry into the Weasley clan as another son, while Harry got a loving mother that he never had growing up. Molly’s love for her family is so deep that she defeated Bellatrix for threatening Ginny. While all of us would have certainly added Molly to our highest tier, unfortunately, this tier list isn’t ranked by acts of love. It’s simply how often that mom was discussed on social media. However, it still warms our hearts that even though it’s been a decade since the release of Harry Potter and the Deathly Hallows – Part 2, people still talk about the Weasley momma.

The company that put together this fun little Mother’s Day celebration is thortful, a UK-based website that allows designers and illustrators to sell their greeting cards directly to consumers. For those of you in the UK who are still looking for a Mother’s Day gift, you can check out our gift suggestions from last year.

To create the rankings, thortful used social listening data to discover the fictional mothers who were the most mentioned on social media - good and bad.

Mary Poppings [sic] has been crowned the top on-screen mum. Whilst not a mother in the traditional sense, she’s a strong maternal figure and practically perfect in every way!

Alongside her in the ‘God Tier’ are Morticia Addams, the spooky but supportive matriarch of the Addams Family, Shirley Bennet, the sassy, take-no-prisoners team mom of the study group in the sitcom Community, and the quirky Moira Rose, from Schitt’s Creek.

A rogue addition to the list is Cersei Lannister (Game of Thrones), who made it into the ‘Good Tier.’ Probably one of the most divisive on-screen mums, yet despite her villainy, she was definitely dedicated to her children – not that it helped any of them too much!

Other mums that made the cut include the katana-wielding Michonne of [T]he Walking Dead, Molly Weasley from the Harry Potter series, and Lorelai Gilmore from Gilmore Girls.

Joyce Byers from Stranger Things only reached the ‘Oh Dear’ tier on the ranking, despite stopping at nothing to rescue her son Will from the terrifying Upside Down, and Catelyn Stark (who is definitely the superior Game of Thrones mum) comes well below her rival Cersei.

The full tier list can be viewed at https://www.thortful.com/blog/the-ultimate-ranking-of-on-screen-mums/.