After new quidditch rule books were released in the fall, the first edition of a completely new rule book has been released. Over the past year, Major League Quidditch (MLQ) has been working on a new project: the MLQ Youth Rulebook. Despite its focus on youth quidditch, it is mainly a rule book for a noncontact, simplified version of Muggle quidditch.

Josh Mansfield, who worked on the rule book together with Serena Monteiro, Frankie Matos, Christian Barnes, Mario Nasta, and Emily Hickmott, tried to summarize the main goals. The team wanted to remove as much contact as possible and also make the sport simpler for newcomers. After the removal of the contact elements, they realized that their goal of keeping the sport the same wouldn’t work.

Ultimately, the path we decided on was to build this rulebook from the ground up—mirroring quidditch wherever we could and adding or changing elements where we felt they were needed to keep the rulebook in line with the goals mentioned above. Some of these changes went further and are things we are excited to bring to the sport of quidditch for the first time. 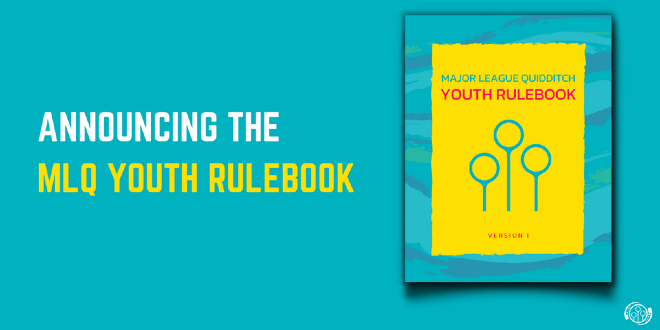 The noncontact version of the sport was inspired by flag football, and that’s why chasers and keepers will wear two flags each. If one of the flags is removed from a player who is holding a quaffle in the opponent’s keeper zone, that player will lose the ball.

There are fewer changes for beaters. A new rule about bludger immunity will now apply to all beaters without bludgers. Beaters are also not allowed to throw bludgers unless they are trying to beat someone or pass a bludger to their beater partner.

One of the last major differences is that players without the quaffle are allowed to move during stoppages. Some penalties were also changed. For example, instead of carding and removing a player from the game after a foul, there will be penalty shots.

MLQ has marked this rule book as Version 1 and is seeking to improve the noncontact version of quidditch. The organization is encouraging people to try to play with the rule book and then give their feedback on it.