As previously announced, the first virtual QuidCon happened on March 5–7. Around 300 participants attended the event.

It was organized mainly by Major League Quidditch (MLQ) but also partly by US Quidditch (USQ) and Quidditch Canada. As a result, the programming was mainly focused on the United States. Despite that, there were still some European Muggle quidditch players in attendance.

All of QuidCon’s programming happened on Zoom, and every part of the program had its own link. Participants had to follow emailed instructions to access QuidCon’s Google Calendar, where they could find every link. 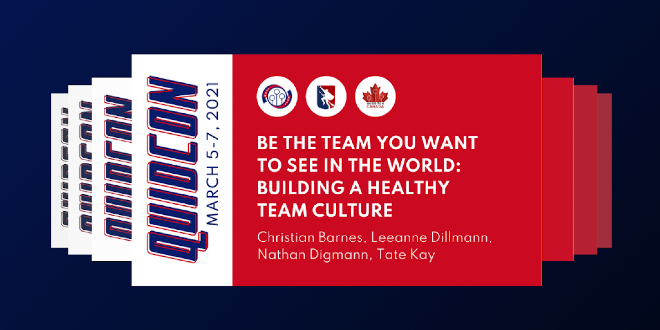 Another important app was Slack, where communication happened during the convention. Every part of the program had its own channel where the link for Zoom was added, and there was also space for any discussions. It was common for discussions to continue on Slack after a Zoom session had ended.

The main problem was that most participants missed some programming that they wanted to attend because of the time or because of scheduling conflicts. For this reason, all the programming from MLQ was recorded. USQ and Quidditch Canada are expected to release their specific panels on their own channels.

Along with the videos, MLQ also released a survey for feedback. As motivation for completing the survey, respondents have the chance to win a QuidCon prize pack. The prize pack contains the book This Is How We Fly by Anna Meriano, a “WTF is MLQ” tote, a USQ snitch beanie, an MLQ championship hat, a USQ water bottle, and an MLQ bumper sticker.

There remains one question: Will be there another QuidCon next year? Prior to this year, the last QuidCon happened in 2014, and it might seem that this year’s QuidCon only happened as compensation for canceled tournaments. In the feedback survey, however, a question asks participants if they would attend an in-person QuidCon next year. If there is enough positive feedback on it, there is hope that QuidCon might happen again.