From jumping from a 50-foot tower in the final Battle of Hogwarts to falling from a broomstick entangled in a wire, Marc Mailley discusses his career as a stuntman in the Harry Potter films with Metro.

Mailley was first noticed by Harry Potter stunt coordinator Greg Powell when Mailley’s former job led him to redecorate the stunt office. Mailley showed Powell a few tricks. After witnessing Mailley’s talent and potential, Powell told him to quit his current job and work for him on the Harry Potter films.

Since Harry Potter and the Prisoner of Azkaban, Mailley has worked on every Harry Potter film. From there, his career launched into other films, such as stunting for Pirates of the Caribbean, X-Men, Skyfall, Fantastic Beasts and Where to Find Them, and Jason Bourne. Mailley has also made a career as an assistant stunt coordinator for films such as Justice League, Fantastic Beasts: The Crimes of Grindelwald, and Star Wars: Episode IX: The Rise of Skywalker.

One stunt in particular hits home for Mailley – the Nagini attack in Harry Potter and the Deathly Hallows – Part 1. David Holmes, the stuntman who originally stunt-doubled for Daniel Radcliffe and Mailley’s friend, was left paralyzed from the chest down doing this stunt. Mailley then had to take over as Radcliffe’s double with Holmes’s injury in mind.

I remember doing the jump back through the wall when the snake attacks Harry in the house, which ends up smashing through the wall. It had quite a lot of meaning to it because it was the stunt that my friend was doing when he had the accident, so it was quite a strange one to do. I had quite a lot of weird feelings about it because obviously, my friend should have been doing it at the time, and not me. So that was quite a strange stunt to perform after what happened.

As fans will recall, the action itself edited into the film is fast. If you blink, you miss it. It is not the type of stunt an outsider would predict as being one of the most dangerous, Mailley reflects.

We thought we were probably quite invincible at the time because we’ve done some very big stunts, and unfortunately, the one he got injured on, you probably wouldn’t think it’s one of our bigger stunts that we’ve done as a team. It just caught us off guard. It definitely shows you’re vulnerable and you do need to keep your head screwed on and don’t take things for granted. 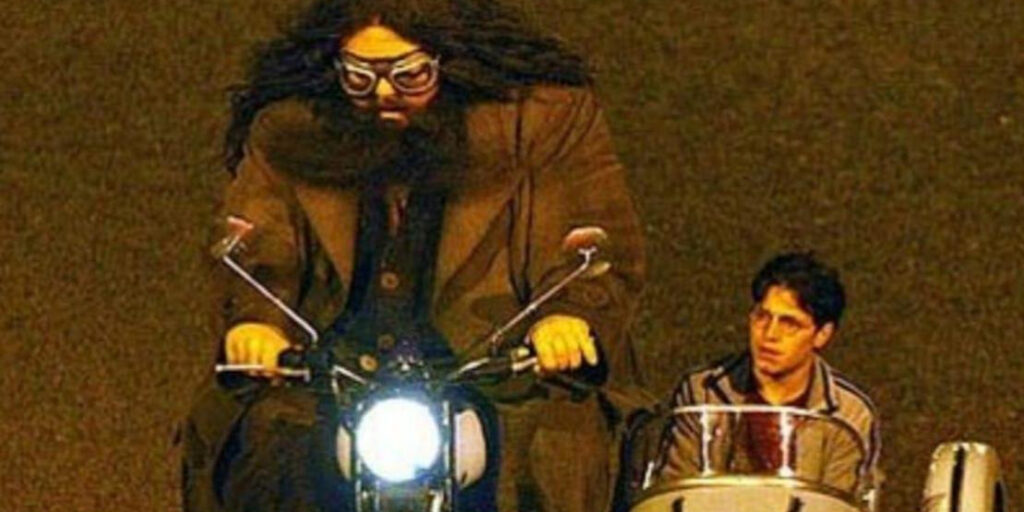 Though the stunt through the wall during the Nagini attack was dangerous and impactful with Holmes’s injury, Mailley explained that his least favorite stunt was actually falling off a broomstick in Prisoner of Azkaban.

That was probably the most awkward stunt I’ve done in my career because that involved being wrapped in a wire about three or four times. You had to be winched up to 55 feet to the top of the stage, and you had to swing yourself upside down [and] hook your legs round the wire so you’re facing headfirst down to the ground. Because you’re winched up, every time you breathed in, the wire around your stomach would just get tighter. It’s a very horrible sensation – you’re going from upside down to spinning multiple times, and all the way down you have no idea where you are until you hit the mats at the bottom. That was probably my least favorite!

From a broom or through a wall, falling seems to happen a lot in Harry Potter. Mailley recalls jumping off of a tower for Harry Potter and the Deathly Hallows – Part 2, which caused Voldemort’s stunt double to suffer a concussion.

We ended up clashing heads at 55-foot [sic], which didn’t work out too well for him. He caught the back of his head and had one hell of a lump and ended up getting carted off to hospital with serious concussion.

Stunt work is no joke. Through the years, Mailley has encountered injuries himself, including two knee reconstructions. Mailley teased that working with Radcliffe can also be dangerous, having also worked with him on two other films, The Woman in Black and Victor Frankenstein, both with drowning scenes.

Maybe he’s asked; he’s trying to get rid of me!

For more of Marc Mailley’s experiences as a stuntman, you can read his full interview with Metro. Would you take on such a dangerous role?