Hermione Granger Is Not Your Feminist Icon

One of the most beloved characters in literary history, Hermione Jean Granger is a popular role model. In particular, she is lauded as a heroine who is smart and savvy – as the old adage goes, “If it weren’t for Hermione, Harry would be dead in Book 1.” Hermione’s status as a role model is not unearned; however, upon closer inspection, her feminist credentials don’t quite stack up in many ways.

Assuming you’ve overcome the rage instilled in you by this headline and picked whatever you threw across the room up off the floor, let’s break down how one-dimensional representation has hindered Hermione’s character development.

Central to the feminist narrative is the idea that empowered women empower women and the idea of a collective force of women who lift others up. Hermione often operates outside this paradigm, unfortunately, and is sometimes incomprehensibly condescending in her relationships with other girls throughout the books, most notably those with her peers. 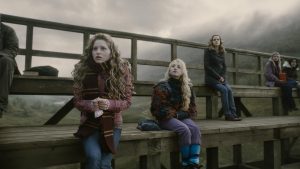 Popular culture is littered with Cool Girls™ – the girls who are “one of the guys” and don’t have female friends because they’re “not here for that drama.” Hermione falls into this trope most clearly through her interactions with Lavender and Parvati with whom she doesn’t share a close bond. This is unusual because they are the three sole female Gryffindors of their year and also because of the close bond Lavender and Parvati have with each other. Whilst Hermione does not explicitly dislike these characters, they endlessly demonstrate a frivolity that Hermione does not possess. 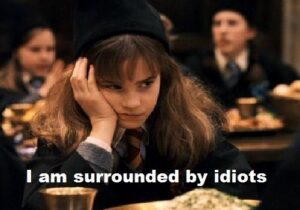 This is highlighted in Lavender and Parvati’s love of Professor Trelawny and Divination, an area of study to which Hermione is vocally opposed and considers fraudulent. As the books progress, Lavender and Parvati carry on as quintessential teenage girls: they love fortune-telling, are a bit boy crazy, and never turn down a good giggle. They are, in short, everything Hermione is not.

When Firenze, who is often described as handsome, begins teaching Divination, the girls approach Hermione:

Hermione’s response is so far removed from her characterization as being a key supporter of all different types of beings and is actually downright offensive. Reducing Firenze to the sum of his body parts sits outside the general ethos Hermione promotes (and sits even more uncomfortably in light of views the author has recently made clear) and exists solely to differentiate Hermione from the superficial idolatry that teenage girls possess because she, once again, is too cool for all that. When she does join the “games” to make Ron jealous, her behavior is described as a new low she sunk to. 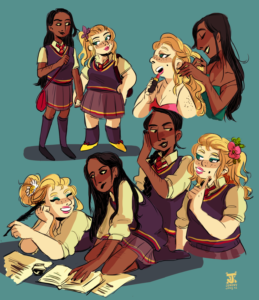 Hermione’s dislike of Lavender and Parvati wouldn’t be so pronounced if it were balanced with other healthy female-centered relationships, but instead, she clashes with others – like Luna – and we see the balance does not exist. The closest female friendship Hermione has is with Ginny, and it’s not ideal because it is largely out of circumstance – Ginny lives in the house in which Hermione often stays and eventually becomes part of their group. This relationship is underscored by Ginny being the sole female character who couldn’t possibly serve as a romantic rival in Hermione’s affections for Ron. 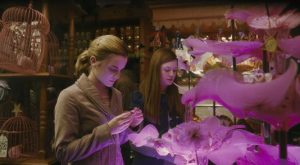 In addition to Hermione’s lack of close female friendships, her grudges toward unpopular female characters such as Rita Skeeter are disproportionate to that of Harry’s and Ron’s. Whilst Rita Skeeter is loathed universally, Hermione makes it her mission to discredit her, ultimately keeping her illegally as a captive for an undefined time and blackmailing her remorselessly. Hermione’s distaste for Fleur is evident when Harry observes that Fleur must have had considerable magical skill to be chosen for the Triwizard Tournament. Hermione, often a proponent of gender equality, shuns Fleur without reason. Again, these ill feelings are not balanced by similar feelings of rage toward Voldemort or other male antagonists.

By relegating Hermione to a plot device to counsel Harry and Ron, she suffers her own lack of growth and at times exists in complete contradiction of her own progressive feelings and morals. Hermione has the potential to be a complex, empowering female character.

Rather than reaffirming her passion for equality and justice, the narrative lets Hermione down by rendering her female friendships trivial and centering the competitive nature of teenage girls over the collaborative and compassionate bonds that form during such a formative part of life, leaving us to acknowledge the limitations of one-dimensional tropes that transcend the page and harm young women in real life.