Painting of the Late Helen McCrory Auctioned for Charity

It’s been just over a month since Helen McCrory sadly passed away at age 52, and while she played Narcissa Malfoy in the Harry Potter franchise, it isn’t just the Harry Potter fandom that is mourning her loss.

Throughout her successful career, McCrory played many roles, including Aunt Polly in the British gangster series Peaky Blinders, which centers around a gang of the same name based in Birmingham, England. A fan of the hit TV show decided to create a sensational portrait of McCrory as Aunt Polly. 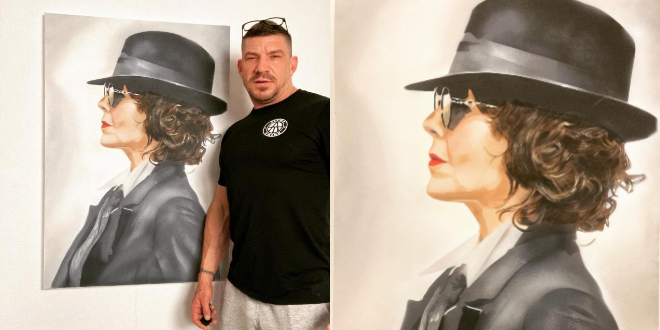 Artist Paul Cottie and his portrait of the late Helen McCrory

Urban artist Eyesaw, whose real name is Paul Cottie, became a fan of Peaky Blinders while in lockdown during the height of the COVID-19 outbreak last year.

Cottie has given the money raised to the Tom Bowdidge Youth Cancer Foundation, which is dedicated to Tom Bowdidge, who died at the age of 19 of a desmoplastic small round cell tumor and extensive peritoneal disease in October 2013. The charity helps teenagers and young adults with cancer, supporting them physically, financially, and emotionally.

The success of Cottie’s portrait was unexpected, and he said he was “actually quite taken back by the [number] of likes, shares and positive comments it received.”

He is also offering limited-edition prints of the portrait to those who missed out on the artwork and has uploaded a video on YouTube on how he created it.

Cottie isn’t the first to create artwork in memory of the late actress. Earlier this month, Chelsea Jacobs, an artist from Dublin, Ireland, painted a mural of McCrory near Grand Canal Dock in Dublin.

Like Cottie, Jacobs also focused on McCrory’s character in Peaky Blinders, surrounding it with the words “I’m having trouble myself these days and I’m twice the man you are. RIP Helen McCrory.”

Both artists have done an incredible job, creating beautiful pieces of art in memory of the exceptionally talented Helen McCrory.