Muggle quidditch in the United Kingdom is slowly coming back. Currently, it is in Stage 3, and according to its plan, there is a chance that quidditch will be fully back this summer. Meanwhile, QuidditchUK has released amendments to the rule book for the 2021–2022 season.

The amendments apply to the new rule book released by the International Quidditch Association (IQA) in the fall. QuidditchUK didn’t make any major changes to the IQA’s rules. It’s mostly minor changes or clarifications, for example, clarification about excessive force beats to the head.

QuidditchUK forbids defensive charging when a player doesn’t have a ball. The outer hoops in the United Kingdom have to be 2.75 meters away from the middle hoop instead of 2.34 meters because QuidditchUK believes that there are too many people around hoops and that that is an advantage for defensive teams. QuidditchUK also decided to allow using brooms that are between 81 and 107 centimeters long but plans to remove this amendment in the future.

In addition to preventing the quaffle from being taken out of the game, there is a new referee call: “Play the quaffle.” It can be called only in the keeper zone when the quaffle is stopped for at least five seconds and players are trying to get possession of the ball. After the referee makes the call, the players have five seconds to get the ball and continue the offense, or the game is stopped and the quaffle will go to the defensive team. 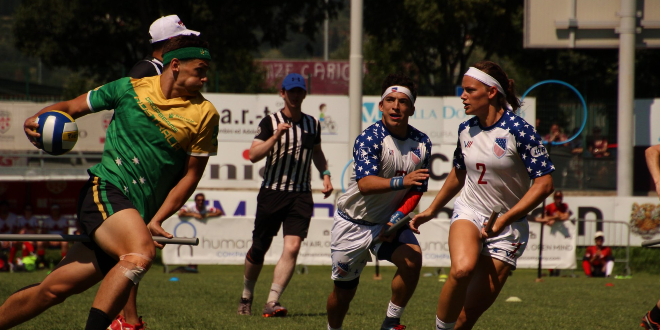 QuidditchUK is not the only national governing body that has made amendments to the new rule book. On March 30, Quidditch Australia released its amendments, which are also mostly minor changes or equipment changes.

According to the official IQA rule book, a team has to have at least seven eligible players during the seeker floor, but Quidditch Australia reduces the number of eligible players to six in cases of injuries, but one of them has to be a keeper. In Australia, a keeper is able to substitute when the quaffle is dead before having the quaffle returned to them to restart the game if it won’t cause the game to be delayed.

Like QuidditchUK, Quidditch Australia made amendments to the rules about brooms. Brooms that were purchased and legal during the 2020 season can be used until the start of the 2023 season, but any brooms purchased after 2020 have to have the new right broom size. Quidditch Australia also allows wooden brooms because there are many teams that have a large collection of them, as well as taping brooms because it is aware that many teams are proud of and enjoy decorating their brooms with tape.

Some other amendments to equipment are that Quidditch Australia now allows metal studs on shoes; shin guards if fully covered by a player’s clothing; cultural headwear, such as turbans or hijabs, if they are not a safety risk to other players; and jewelry that cannot be removed. Australia, however, disallows hard-brim hats. The mouthguard is also not mandatory in Australia, but it is strongly recommended.