When traveling, your average tourist’s itinerary will likely include several historical landmarks, legendary restaurants or bars, and various attractions seen on TV or in books. Your average cinephile, however, is likely to have a list composed of filming locations from their favorite movies. Well, imagine that one of the oldest major film studios is curating a brand-new walking tour of iconic filming locations from its library of movies. That is about to become a reality.

Recently, Warner Bros. posted a recruiting advertisement seeking a tour guide. Though it hasn’t been officially announced yet, we are excited to be one of the first to share that this June, the film production company is set to launch its new walking tour and photographic exhibition in Central London, England! While we don’t yet have any details regarding the stops on the walking tour, we know that the tour will end at the open-air shopping hub called Covent Garden for the photographic exhibition, which will feature behind-the-scenes location photography.

Since it is set in Central London, we can probably assume that the tour will include stops for fans of the Harry Potter films. After all, Potter is one of Warner Bros.’s biggest franchises, and a few locations even made it on a list of top ten destinations in the United Kingdom. Though the Potter movies were mostly filmed at Leavesden Studios, the cast and crew did shoot several scenes in London. With that all being said, Potter has to have a presence on the tour, right?

With Covent Garden as an anchor point, we can try to speculate which locations in Central London are within walking distance. By eliminating all the locations that are not open to the public, we can further narrow down the list of possible stops. With the magical tool of Google Maps, we can determine a few notable locations that any Potter fan would find worthwhile.

Since Charing Cross Road is only six minutes from Covent Garden, most Potter fans would certainly like to see where the Leaky Caldron is located in the books. Though the movies didn’t film on the street, it could be a great stop on the tour mostly because Charing Cross Road is believed to be one of the places that inspired Diagon Alley, due to the many book stores focused on magic and the occult that line the street. At the very least, the tour guide could mention it on the way to another stop. 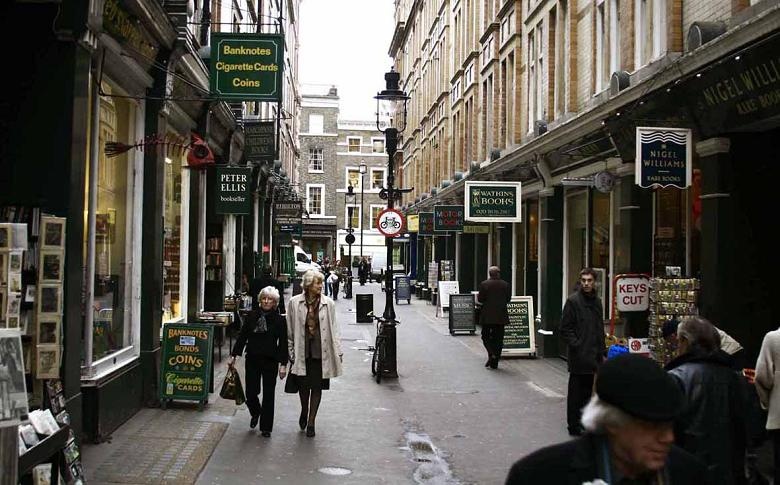 Charing Cross Road is believed to be one of the inspirations for Diagon Alley.

Piccadilly Circus is a large bustling area close to shopping and entertainment. It’s also where Harry, Hermione, and Ron Apparate to after fleeing from Bill and Fleur’s wedding in Harry Potter and the Deathly Hallows – Part 1. It can be easy to miss since the golden trio nearly gets flattened by a double-decker bus. Considering the commerce in the area and the approximately 11-minute walk from Covent Garden, it seems like a great stop on the tour.

Lastly, just about 12 minutes from Covent Garden, you’ll find the corner of Scotland Place and Great Scotland Yard. Potter fans will recognize the area from a memorable scene in Harry Potter and the Order of the Phoenix, where Arthur and Harry take the visitor’s entrance into the Ministry of Magic. The filmmakers returned to the area for Deathly Hallows – Part 1, where Harry, Ron, and Hermione go to seek disguises to infiltrate the Ministry.

In “Order of the Phoenix,” Harry and Arthur head to Scotland Place to use the visitor’s entrance into the Ministry of Magic.

In “Deathly Hallows – Part 1,” the trio return to Scotland Place to look for disguises to infiltrate the Ministry.

It’s fun to speculate how Warner Bros. will incorporate the Potter films into its walking tour in June. Which filming locations from the Harry Potter movies do you believe will be included on the tour? Have you been to any? Let us know in the comments, and if you have any photos of the locations, be sure to tag us on Instagram.