In the Harry Potter film series, Dame Emma Thompson played the quirky and somewhat underappreciated Ravenclaw Sybill Trelawney. In real life, however, “underappreciated” is not a word associated with Thompson, but “Ravenclaw” might be.

Her intelligence, witty comments, and decades of acting experience that have won her numerous awards make her a rather wise and captivating individual.

Thompson joined forces with costar Emma Stone in a virtual conference promoting Cruella, which stars Stone as a young Cruella and explores how her flair for fashion catches the eye of Thompson’s Baroness von Hellman.

The two actors discussed their characters and costumes, and we’ve compiled Thompson’s best bits, reinforcing just how fabulously witty she is and proving she is a Ravenclaw.

Thompson is very accepting of herself. She describes being pulled into a corset “tightly enough so that bits of me would squish out of the top of the costume” and jokes that “there were people hauling on [the] ropes” of her ship’s-rigging-like underwear.

But these uncomfortable costumes are spectacular.

Every time Em and I would come on set, we’d just look at each other and walk around each other, like we were sculptures or works of art.

With the Baroness’s uncomfortable corsets came odd eating habits of “a little bit of cucumber here and there.” Thompson enjoyed hating that the Baroness didn’t eat: “I don’t trust people who don’t eat.” 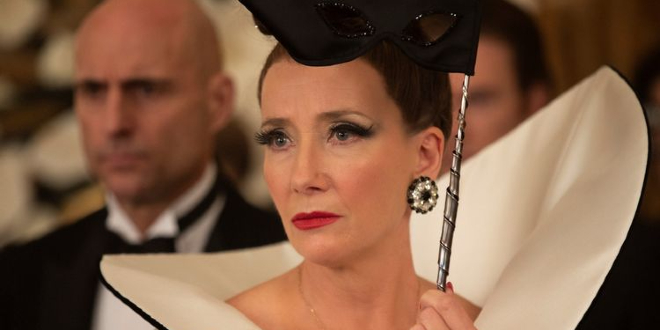 Emma Thompson as the Baroness in “Cruella”

Thompson’s sharp wit is highlighted when asked about the process of creating the Baroness, who is described as “both fabulous and also a living nightmare.” Thompson jokes that she drew on her own life.

If my husband were in the room, he’d say, ‘And no acting required, really.’ […] I’ve been asking for quite a number of years if I could be a proper villain. I spent decades playing what my mother used to call ‘[g]ood women in frocks,’ and now I got to play a really evil woman in frocks.

“He’d widdled on one of my costumes.”

The on-set Dalmatians were“such sweet dogs […] so nice and they worked so hard.” Despite this, Thompson jokingly tried to get her dog, Wink, fired because “he’d widdled on one of my costumes.”

Nobody believed me. They just knew I was lying and that it was just a vicious attempt to get rid of this dog that was, frankly, upstaging me and getting in my light. The dog was an obstacle. 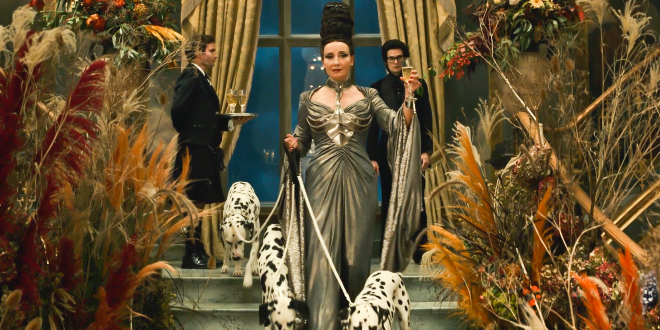 Emma Thompson with her Dalmatians in “Cruella”

Thompson’s creative abilities aided her when being “mean” to Stone: “There is nothing more fun than pretending. I found pretending to be mean came horribly easily.”

Thompson’s wisdom is highlighted while discussing her experience of others, concluding that the Baroness is a “mixture of all kinds of people.”

She’s quite venal, but her greed is really just for herself. […] She’s very weak and contains the inevitable seeds of her own destruction because she can’t acknowledge talent in any other person. […] And of course, I found it very difficult being with Stone, who’s more beautiful, young, talented, etc. [than me]. I swallowed my bitterness and dealt with it, mostly through drinking Negronis, one after the other, late into the night.

“If she just lies on top of Cruella, she’d manage to suffocate her.”

We’re ending on perhaps the most important question of the whole video conference, and one that once again demonstrates Thompson’s wit: “In a fist fight [sic], who wins, the Baroness or Cruella?”

The Baroness, just because she’s heavier. If she just lies on top of Cruella, she’d manage to suffocate her. But she wouldn’t ever get the chance because Cruella is far too nippy on her feet. She’s like Luke Skywalker under the legs of that big walker in Empire Strikes Back, which is one of my favorite movies. 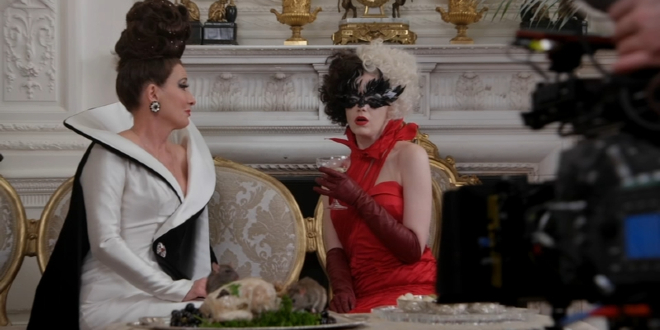 If this video conference has shown us anything, it’s that Dame Emma Thompson’s intelligence, wisdom, and creativity as an actor, alongside her spectacularly sharp wit, prove she’s a true Ravenclaw.

Cruella is now available in theaters and to stream on Disney+.