“Harry Potter” Named the Most Popular Movie Franchise in the World, Leads in 75 Countries

While some fans were not always pleased with the movie adaptations of the Harry Potter books, there’s no denying that the film franchise has cemented itself as a major milestone in modern cinema history. Aside from its massive popularity with die-hard fans, the film series has made over $7.6 billion in worldwide box office gross (without the Fantastic Beasts franchise). That’s quite a lot of money amassed all over the globe during the films’ respective theatrical runs. However, it seems the series retains staying power since we’re discovering that Harry Potter is the most popular movie franchise in the world, according to the geeky website FandomSpot.

From a list of the top 100 highest-grossing movie franchises, FandomSpot analyzed the monthly search volumes of as many countries as possible and discovered that Harry Potter was the most-searched movie franchise in a whopping 75 countries in the world, according to data collected this month. With 195 countries recognized by the United Nations, that’s well over a third of the countries in the world searching the web for the Boy Who Lived. Interestingly enough, the country with the highest search volume is the United States, with 1.5 million. And of course, the movie franchise with the most search volume in the US is Potter. 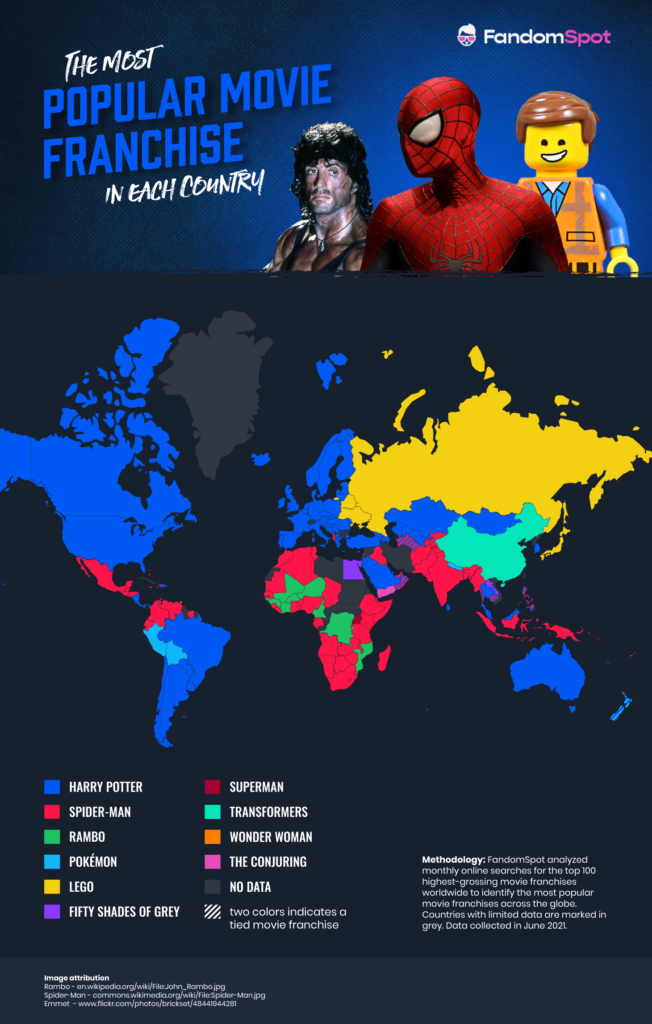 FandomSpot conducted research into finding the most popular movie franchise based on search volumes in each country. It was discovered the “Harry Potter” film franchise was the most-searched movie franchise in 75 countries, including the US, Canada, Brazil, France, the United Kingdom, Italy, Germany, and Spain.

The only other film franchise that comes close to Potter is the Marvel comic book character Spider-Man. With a total of eight films, the Spider-Man film franchise has earned approximately $6.3 billion worldwide, excluding Venom. Overall, in terms of box office draw, the web head is no slouch either. With regard to search volume by country, Spidey comes out on top in 68 countries, making it the second-most-popular movie franchise. After that, no other film series even comes close in terms of country count. Sylvester Stallone’s Rambo movie franchise managed to snag the third spot with a respectable 12 countries. Considering the film series only consists of five movies beginning in the mid-’80s, with a total worldwide box office gross of $880 million, it’s not only surprising, but it’s quite impressive as well.

It’s nice to know that our version of the wizarding world populated by Potter fans extends across the globe. Last month, MuggleNet demonstrated the global reach of Potterheads when we commemorated the Battle of Hogwarts by having friends and staff members read significant passages from Harry Potter and the Deathly Hallows in 15 different languages/dialects. It was quite wonderful to see all of us gather together to remember a historic event in wizarding history. Unity through Potter.

What do you think? Do you feel the fandom is justified by these numbers? Do you think there’s a better means to measure or another criterion that could have been used to determine the most popular film franchise? Let us know in the comments.

June 2021: New research from geek culture site FandomSpot reveals what is the most popular movie franchise in the world based on the biggest number of Google searches.

The world’s most popular franchise revealed

The most popular movie franchise in the world, the favorite in 75 countries, is Harry Potter, the story of an orphan who discovers he’s a wizard. After the success of the book series, Harry Potter spawned eight movies, two plays, a theme park, numerous video games, a movie-making tour, and countless items of merchandise.

Harry Potter is the most popular movie franchise in the US, Canada, and Brazil, as well as a majority of Europe, including countries such as France, the UK, Italy, Germany, and Spain. 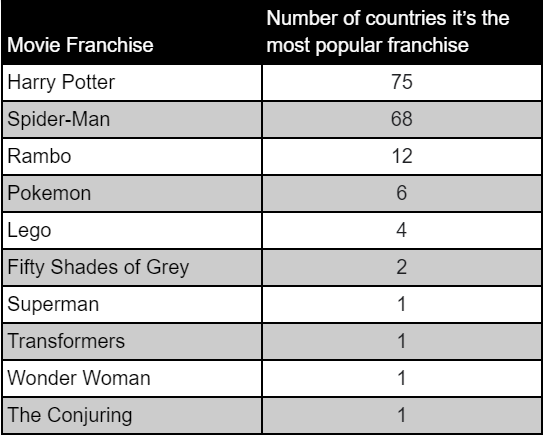 Not far behind, the second[-]most[-]popular movie franchise in the world is Spider-Man, which is number one in 68 countries, including India, Mexico, and Indonesia.

Both Harry Potter and Spider-Man are huge franchises, and two you may expect to make an appearance in a list of the world’s most popular. However, the third[-]most[-]popular franchise in the world is much more unexpected - Rambo.

Rambo, the action series starring Sylvester Stallone, is the most popular movie franchise in 12 countries, including Cameroon, the Ivory Coast, and the Democratic Republic of Congo.

Other unexpected appearances - and non-appearances

Rambo isn’t the only unexpected movie franchise to make an appearance [on] the list. Pokémon is the fourth[-]most[-]popular franchise, top in 6 countries, followed by Lego (4) and - most surprisingly - Fifty Shades of Grey, which is the most popular movie franchise in 2 countries: Egypt and Laos.

The most surprising revelation is the omission of some huge franchises, such as Star Wars, Jurassic World, and Batman. While these franchises did rank highly, they just didn’t rank as highly as other franchises.

Alyssa Celatti at FandomSpot.com and movie expert comments:
“We know that Harry Potter and Spider-Man are popular characters and movie franchises, but what’s surprising is just how many fans across the world love these franchises.

More surprising still is that Star Wars isn’t the most popular franchise in a single country, despite the recent success of Star Wars properties such as Galaxy’s Edge and The Mandalorian. This suggests that, following the mixed reception of the sequel trilogy and the disappointing box office return for Solo, that [sic] fans are maybe falling out of love with the Star Wars movies.”

You can view the map on FandomSpot here.

To view the complete data on the world’s most popular movie franchise, visit here.