Anyone up for a duel? Please bring along your wands for support, but for this face-off, it’s your decks that really matter. What was once the second best-selling game in the country has been forgotten and stashed away by the vast majority in the gaming and wizarding world alike. The Harry Potter Trading Card Game (HPTCG) is a card game of strategy and adventure. Designed and printed by Wizards of the Coast in 2001, this game was released to compete with the ever-popular Pokémon and Magic: the Gathering games made by the same company. 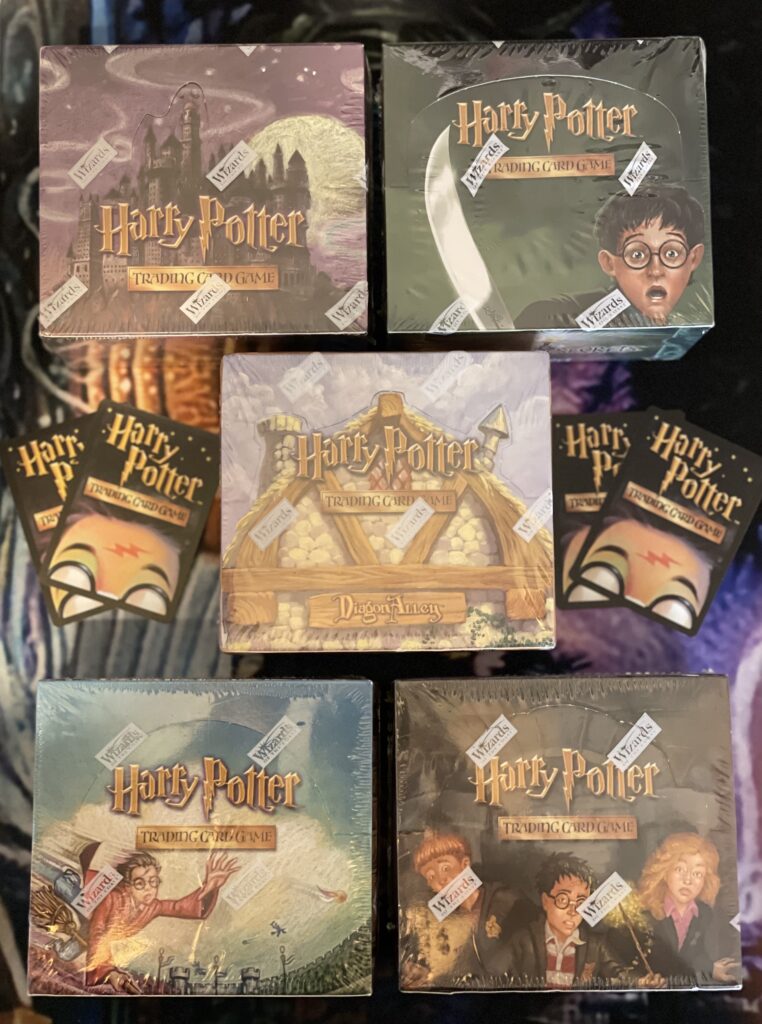 The excitement over the HPTCG was felt in big cities all across the United States. From San Francisco to New York, toy enthusiasts and gamers were lining up to see what the fuss was about and for good reason. In the Harry Potter TCG, you battle against another witch or wizard in a duel where you can use spells and creatures or have your opponent go on adventures that they will need to solve in order to relieve themselves from the effect it has on them. You can also take a visit to various locations, such as Flourish and Blotts, the Burrow, and Madam Malkin’s Robes to get extra help and bring you closer to triumph. In order to play any of these cards, you are required to utilize the “lessons” learned while attending Hogwarts School of Witchcraft and Wizardry, so make sure to pay attention in class no matter how annoying Peeves can get. 😉 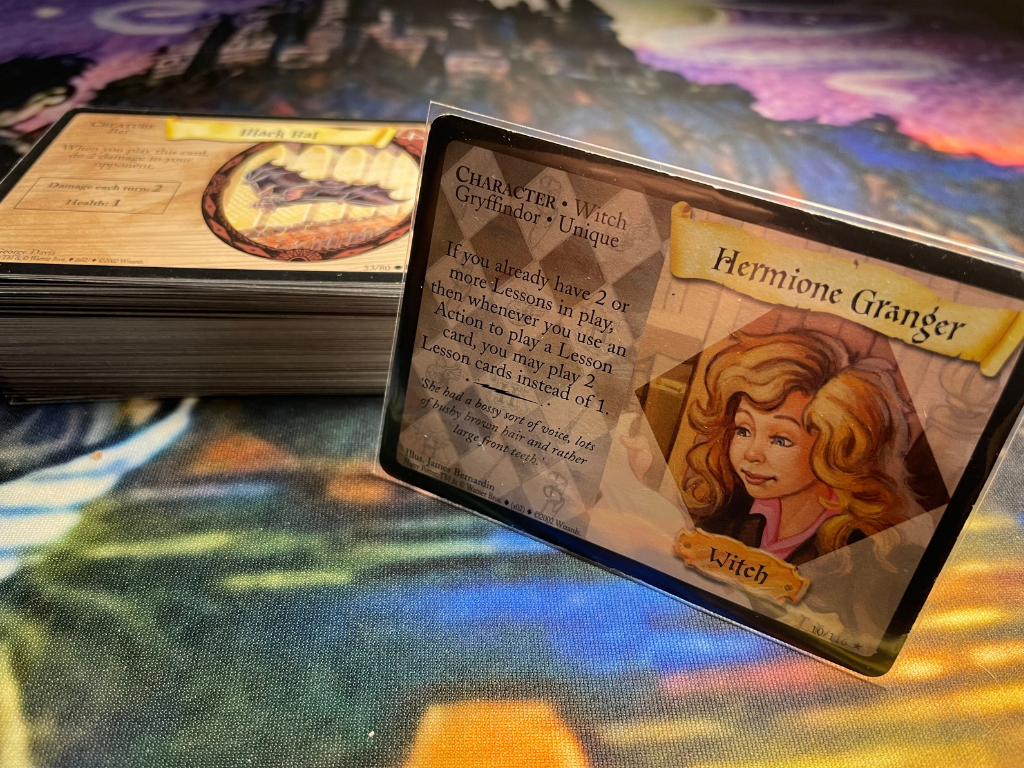 Each player starts with a 60-card deck that they build according to their style and strategy, with one starting character bringing the total card count to 61. Your starting character must be a witch or wizard; no Squibs, House ghosts, or poltergeists are allowed to start the game. However, like most adventures that take place in the castle, these other characters will be there to help or annoy along the way. 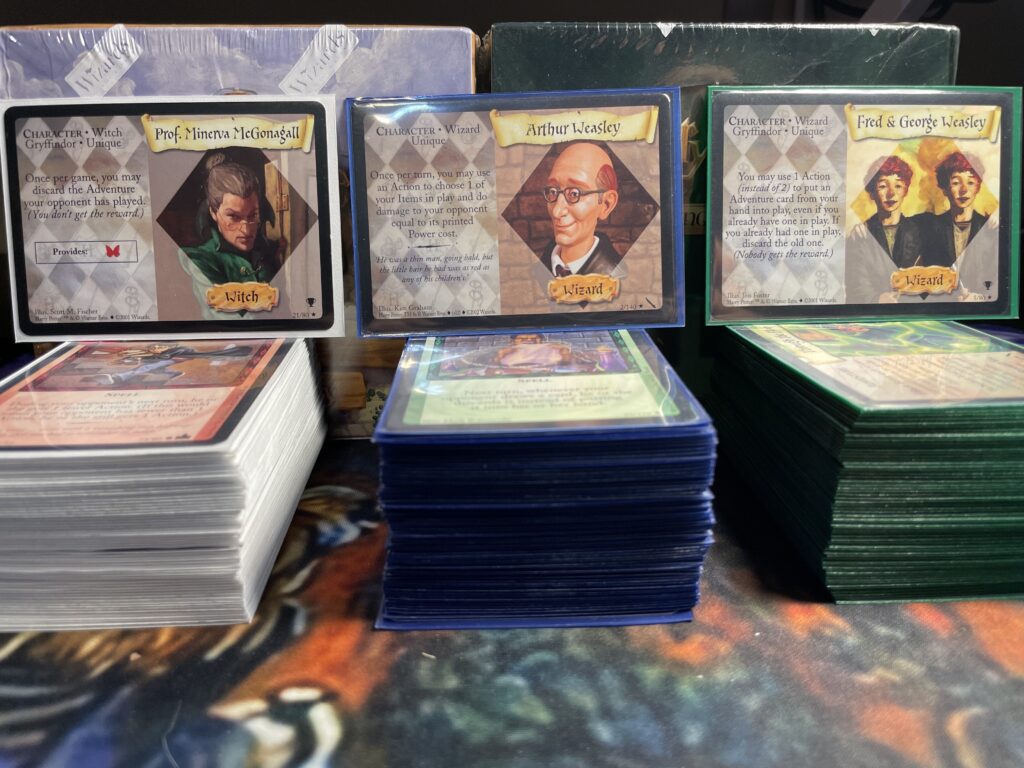 The goal of the game, like any duel, is to defeat your opponent and leave them without resources and abilities. What is your favorite lesson? Transfiguration, Charms, Potions, Care of Magical Creatures, or maybe Quidditch? Be sure to utilize your strengths when choosing your cards and lessons for the deck to play to your advantage. If you received “Outstanding” in Care of Magical Creatures, then maybe you want to add a unicorn, mandrake, or even Fawkes to your decks. If it’s Potions you are good at, stock up on different ingredients with those potion lesson cards because you are going to need them to play the popular Noxious Poison, Draught of Living Death, or Malevolent Mixture. 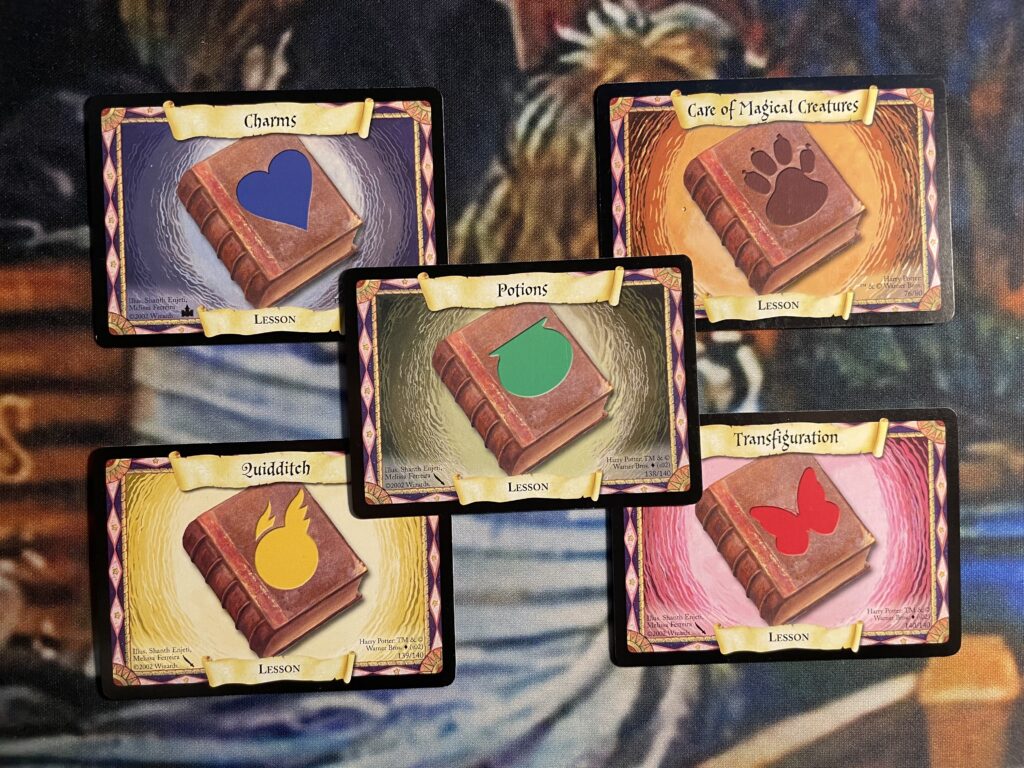 Once your deck is built and ready to go, the cards you include will do damage to your opponent by way of discarding cards from their deck. The player with no cards left in their deck is the one who loses. For example, you have Charms lessons and Charms cards in your deck and decide to play the spell Backfire!, which allows you to do “five damage” to your opponent. They would take five cards from their deck and place them in their discard pile, and on it goes until there is only one witch or wizard left standing with more cards in their deck.

As we know, witches and wizards in the magical world have their own unique abilities, which are reflected in the game. For example, Madam Pomfrey provides healing powers: She allows you to take 12 cards from your discard pile and place them back in your deck; this can be a lifesaver when you are met with damaging spells or creatures. Are you a Quidditch player? Madam Hooch provides you the power to play Quidditch cards, which can help right away if you’re behind on lessons. Be sure to choose your starting characters wisely as they represent you in the game and therefore cannot be discarded by the other player, but they can be defeated. 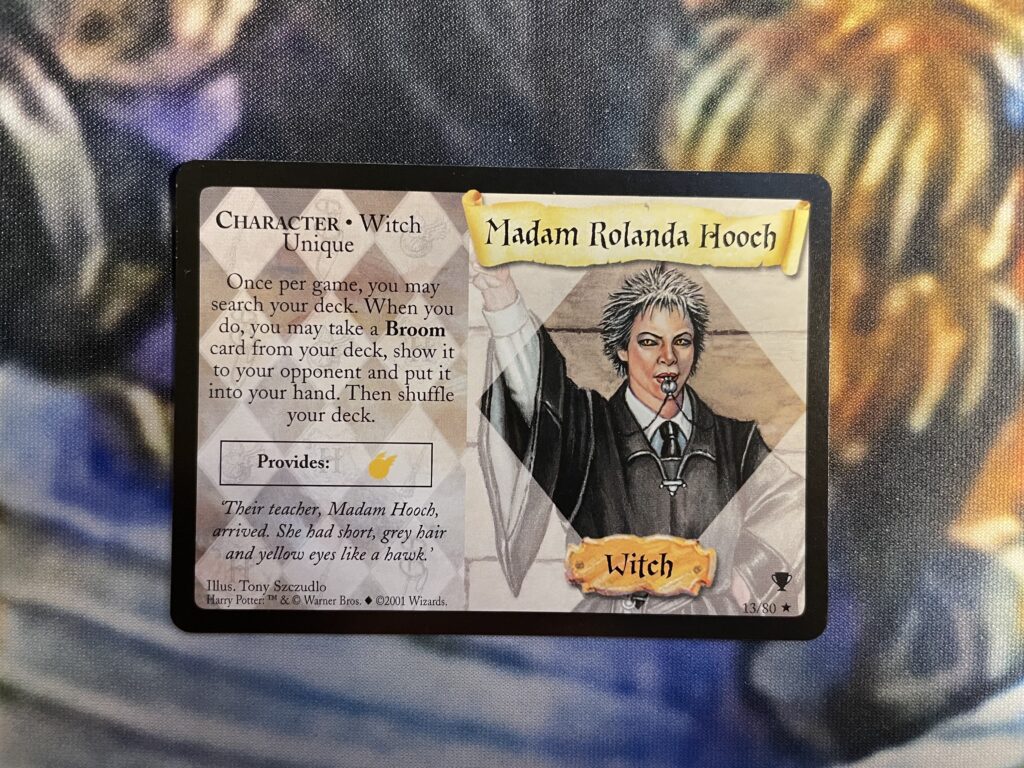 Aside from the incredible gameplay and creativity of these cards, people are drawn to them for the art. There were a handful of artists who worked on these amazing cards, bringing the books to life. This is my favorite thing about the cards, hands down. As a kid, we all remember reading the books and allowing our imagination to soar inside the magical world that J.K. Rowling invited us into. Because this card game is not representative of the movies and actors, it allows you to be transported back in time to the pre-film age where you are able to, with the help of the many artists, bring the characters and creatures to life. This is where the fun of collecting the cards comes in since many people like to sleeve up their cards and put them in collector’s binders like they do with other TCGs. 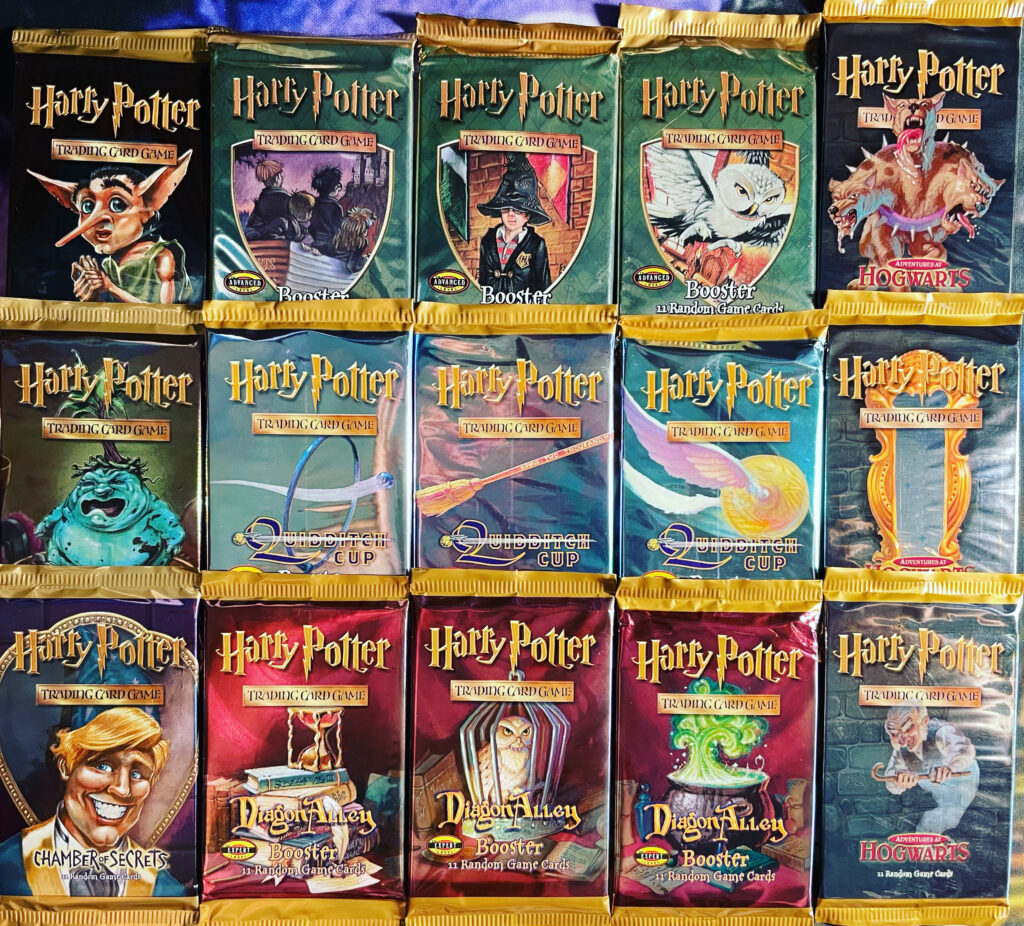 Interested in learning more about the game, how to play, or finding other witches and wizards who are willing to duel? Head over to my YouTube channel, Into the Floo, where I have in-depth content and “how to play” videos all about the Harry Potter Trading Card Game and other Harry Potter-related items from that same time period. Also, look out for giveaways on Into the Floo to help you get closer to completing your collection or decks. 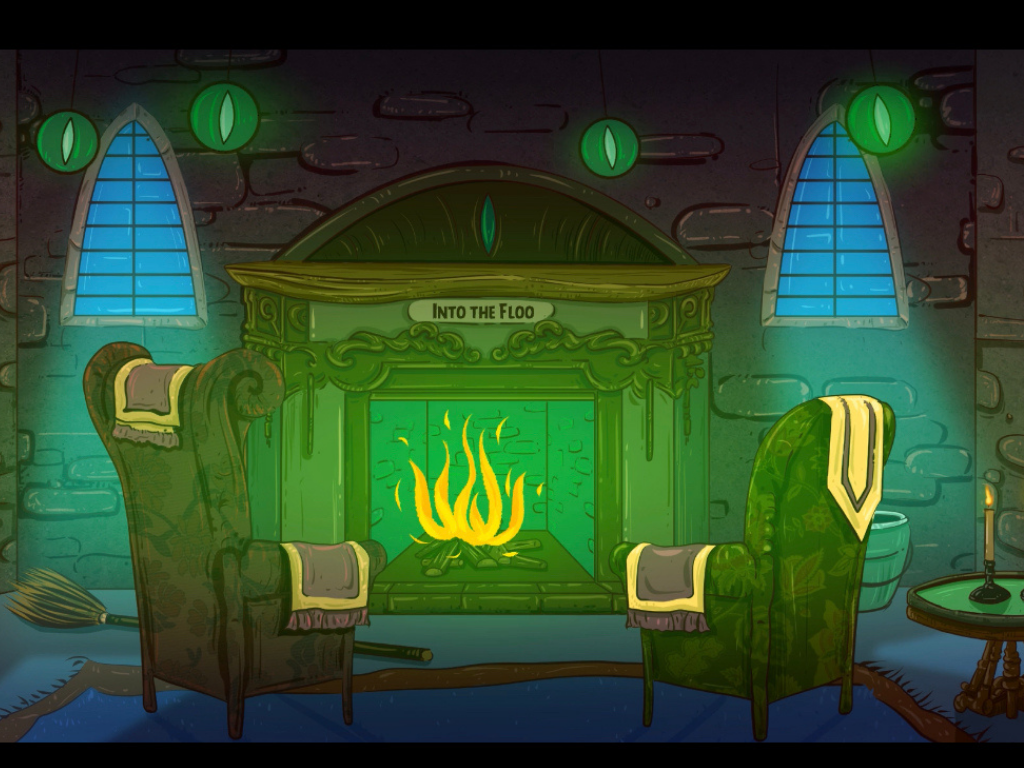 Keep an eye out for the next article where I talk about the “PotterDex,” the same style toy as the Pokémon Pokédex but for the Harry Potter universe instead! 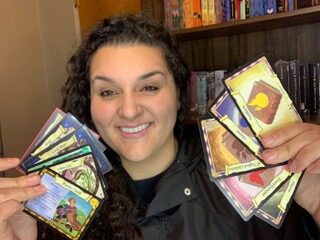