“When I saw it in New York, you could hear a pin drop because people were scared about where it was going, and that was its intention,” screenwriter Steve Kloves stated back in 2011. Of course, he is talking about the moment in which Harry and Hermione share a dance in the tent following Ron’s departure in Harry Potter and the Deathly Hallows – Part 1. For this feature, I would like to examine how the on-screen chemistry between Daniel Radcliffe and Emma Watson, as well as the use of emotive music, allows for this scene to be my favorite moment from the penultimate Potter film. 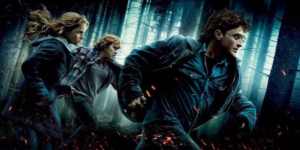 Before the movie’s release back in 2010, I did as many Potter fans did and took the opportunity to reread the Harry Potter and the Deathly Hallows novel, refresh my memory, and prepare myself for what was to come leading up to the release date. While the movie adaptations have a knack for cutting subplots and changing who says what, I never expected them to add a scene that would spark such debate in an already tension-filled film. I should mention here that I am personally not someone who ships Harry Potter and Hermione Granger together, though I’m not opposed to the idea of them being in a relationship either. However, for the most part, I have always viewed Harry and Hermione only as best friends, and it’s for that reason that I find the surprise dance between them uncomfortable in all the best ways and incredibly moving.

Credit must go to the use of music in this scene, a point also raised by Steve Kloves in the video referenced above. It is a Muggle song that Harry and Hermione dance to, making the moment all the more intimate as they are the two members of the golden trio who grew up as Muggles. However, it’s not only that which makes “O Children” by Nick Cave & the Bad Seeds the perfect and emotive song to feature in Harry Potter and the Deathly Hallows – Part 1. The lyrics themselves add to the already heavy atmosphere that lingers in the tent.

“Hey, little train! We are all jumping on the train that goes to the Kingdom. We’re happy, Ma, we’re having fun. It’s beyond my wildest expectation” is only an extract of the lyrics that can be heard during the scene. Still, I can’t help but associate the train with the Hogwarts Express and the kingdom with Hogwarts castle itself. Listening to the lyrics sung by Nick Cave & the Bad Seeds at this point only highlights for me just how far the characters have come since that first train journey back in Harry Potter and the Sorcerer’s Stone as well as how different their lives are now that they are out in the real world and are no longer safely tucked away inside the castle – at least, as safe as one is within the walls of Hogwarts. Repeated in the lyrics is also the song’s title, “O Children,” which only further reminds viewers that we are seeing two 17-year-old children who were forced to grow up much too soon and for the most unpleasant reasons. 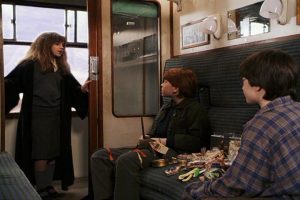 In addition to the song, how Daniel Radcliffe and Emma Watson portray their characters also adds to the tension of the scene. Director David Yates states in behind-the-scenes footage, “In the middle of that dancing, they get very close, and it starts to get complicated in a way because it’s friendship, but it almost becomes something else. You can almost feel when they’re alone together that it could slip into something that was more than just friendship, and that tension, I think, is really interesting.”

It all happens when reality sets back in once again, and Harry and Hermione’s dance comes to an end. The two pull away from each other and linger in a moment that makes many viewers sure they are about to kiss. Whether you watch the scene with eagerness and hope that they do or whether you watch it while screaming at the screen and terrified they might, there’s no debating that this moment certainly achieves the impact that the movie makers hoped it would. For me, it was this moment of “will they, won’t they?” that had me on the edge of my seat and even asking myself, “Do I want them to?” As I stated before, I have never shipped Harry and Hermione as a pair, but I’ve never been opposed to it either. However, though I knew that more complications would arise if they did kiss, such as the two of them having to face both Ginny and Ron and undoubtedly reveal what had happened between them, I couldn’t stop myself wondering, “What if?” For that reason, this scene quickly became and still is my favorite moment from Deathly Hallows – Part 1. 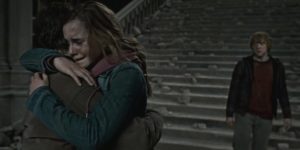