A beekeeper and a quantum physicist walk into a barbeque. Endless possibilities open up.

This is the premise of Nick Payne’s play Constellations, which is running through the summer in London’s West End. We at MuggleNet had the pleasure of seeing it starring Zoë Wanamaker (Madam Hooch of the Harry Potter films) as Marianne, the physicist, against Peter Capaldi (Doctor Who) as the aforementioned beekeeper, Roland. These two characters orbit around each other and gravitate back and forth and in infinite crisscrossing ways in a play that puts mind-boggling theory into action without sacrificing a single atom of its touching human quality. 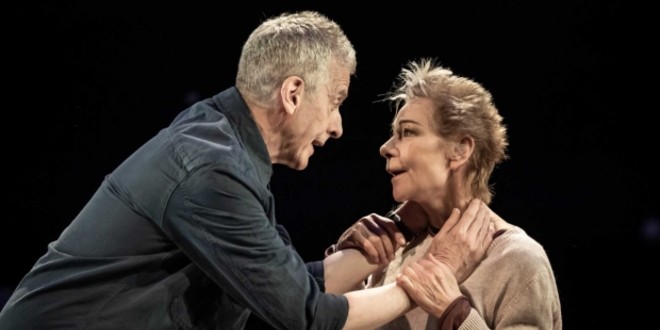 This picture features Peter Capaldi and Zoë Wanamaker as Roland and Marianne in “Constellations.”

While the concept sounds rather daunting, we start out pretty simply at Marianne and Roland’s meet-cute (or occasionally meet-rude) moment. It soon gets trickier as the scenes rapidly change, replay, branch out, and rewrite themselves through potential alternate timelines. According to string theory, a mistimed word or a bad tone can result in a butterfly effect that creates infinite realities that both never and always existed. The storytelling matches the organized chaos of scientific theory. We jump between snapshots of the couple’s relationship with or without infidelity, reunions, illness, miscommunication, reconciliation, and a spot of ballroom dancing in no chronological order.

Constellations is a play best approached without knowing too much about it in advance. But when you do experience it, you will want to come back for more to untangle the story again and again, which itself does just that. Nick Payne’s play is a text that is brimming with life, ideas, and effortless intelligence. The science is not the story; it remains the spark for one. The play is not trying to be clever. It is simply ingenious.

What we can report on without spoiling it for future audiences is the absolute perfection and master class in acting that we have seen from the cast. Capaldi is without flaw as the many different versions of Roland, and Wanamaker is an absolute joy to see live. Her energy, precision, and range shine brightly as she snaps in and out of scenes at a moment’s notice (just as much as a quick light and sound effect can allow) without ever losing her character’s essence. In a story that exists so heavily in the text, it is especially heartbreaking and brilliantly self-reflective when Marianne develops aphasia. The words are there (i.e., the story is there), even if she can’t quite say them or has to find a textual roundabout to arrive at the same gist. 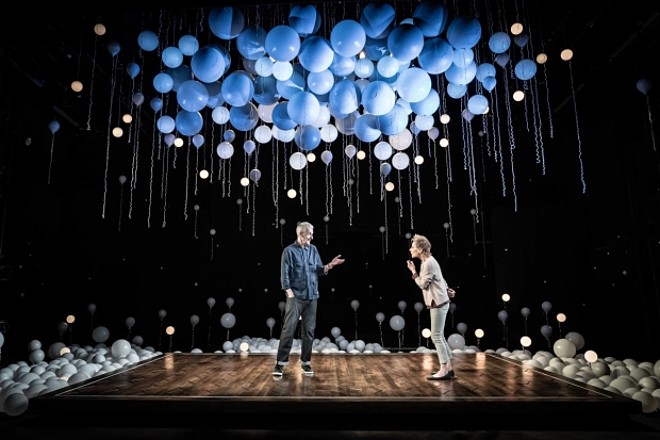 Roland and Marianne are stars colliding again and again in a weightless, infinite, intergalactic ball pit.

Michael Longhurst’s direction is simple and effective. So is the set: an environment of glowing, floating, white balloons, which is equally eerie (is it an interstellar limbo?) and playful (is it a heavenly party for two?). Payne’s text speaks for itself without flashy gimmicks. The dynamic keeps us on our toes. We are not blindsided – we go deep and explore several what-ifs and “what-went-wrongs” without either character losing their authenticity or charm. 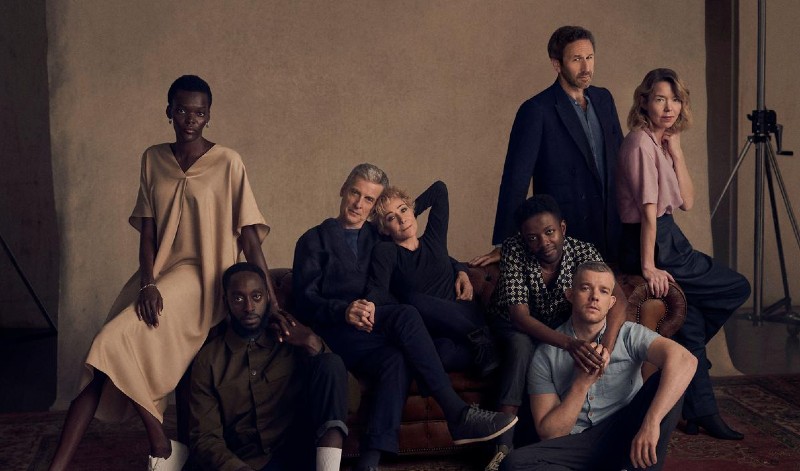 Tickets are still available, and many more may be up for sale after July 19, which is the date when most COVID-19 restrictions are going to be lifted across England, including limited seating in theaters. Stick to official sources for legitimate updates, and remember to check the cast schedule before booking your visit to avoid surprises. After that, anything is possible.