Will Dame Maggie Smith Be Returning for “Downton Abbey” 2?

Last year, to the delight of fans, it was officially confirmed that a new Downton Abbey film is in the making. With this exciting news comes the speculation as to whether or not Harry Potter actress Dame Maggie Smith (Minerva McGonagall) will be rejoining the cast.

Smith has been a member of the Downton Abbey cast since it started as a television program in 2010. She plays Violet Crawley, Dowager Countess of Grantham, and has won three Emmy Awards for the role. However, at the end of the first Downton Abbey film, Smith’s character revealed that she was suffering from an illness that was likely to take her life, leading us to question whether she’ll be returning for the sequel.

Filming of Downton Abbey 2 began in June, but this photo released on its official Twitter page neither confirms nor denies the dame’s presence in the film.

It’s so good to be back. #DowntonAbbey2 pic.twitter.com/NWjWxTYx7l

Back in 2019, producer Gareth Neame discussed the difficulty of getting all cast members together at the same time for the sequel, but this also didn’t give much away.

We’re working on what the story is, and when we might be able to make it. But it’s the same as the first time around: We have to try to get everyone back together again. And that was very challenging.

The challenge will be, is everyone available at the same time? Can we make deals with them? That will be the challenge.

But then in April, film distribution company Focus Features tweeted, “We’re thrilled to announce that Julian Fellowes and the entire Downton cast are back for #DowntonAbbey2.”

Smith’s fellow Downton Abbey actor Jim Carter (Carson) similarly confirmed, “It’s got all the same characters in, all the regular characters,” and Maggie Smith has been listed as a cast member on IMDb’s page for Downton Abbey 2. These all fuel the speculation that Smith may indeed be returning. 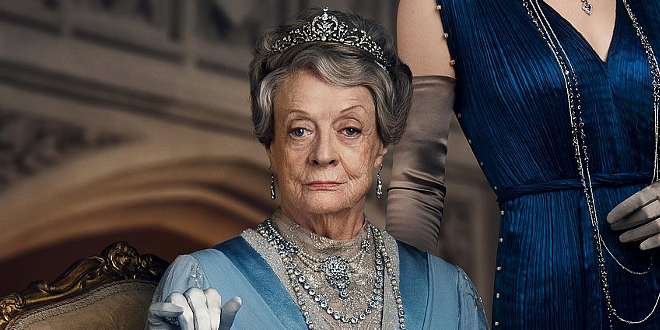 Dame Maggie Smith appears as the Dowager Countess of Grantham in a poster for “Downton Abbey.”

Neame has also hinted at Smith’s return, stating, “All I would say is that one of the things that’s been commented on over the years about Downton is that we’ve had plenty of medical misdiagnoses.” Another glimmer of hope for the dame was given to us by writer and creator of the series Julian Fellowes, who is returning to write the sequel’s screenplay.

We should remember that at the end of the film, Maggie was by no means dead. You imagine Violet is on her way out, but that decision hasn’t been reached.

This brings us to the conclusion there’s a good chance that Smith might be returning for the sequel, but the question is, if she does return, what state of health will her character be in?

Back in 2017, when there were rumors of a Downton Abbey movie, Smith believed if it was to go ahead, the film would begin with her character’s funeral.

Could the start of the second movie see Smith’s prediction come true, or will the sequel begin immediately after the events of the first film, with Violet dying within the first few minutes? Maybe there will be more of a time jump between the two films, where we discover Violet has indeed died, but Smith returns in flashbacks?

Should we be concentrating on Fellowes’s comment, “Violet is on her way out, but that decision hasn’t been reached,” in the hope that this means a miraculous recovery for the countess?

We have a little longer to wait to discover Violet’s future. COVID-19 originally delayed the filming of the movie, and then its initial release date of December 22 was moved to March 18, 2022.

Do you think Dame Maggie Smith will be returning to Downton Abbey 2, and if so, what will be her fate?