The coin is a rectangular shape and features a poster image from the seventh film that shows Harry, Ron, and Hermione running through a forest on a mission to destroy the Horcruxes. On the reverse side of the coin is the Ian Rank-Broadley effigy of Her Majesty Queen Elizabeth II.

The coin is made from 1 oz. of pure silver and is held inside a clear acrylic display case, perfectly made for easy access of opening to get a close-up view of the coin. 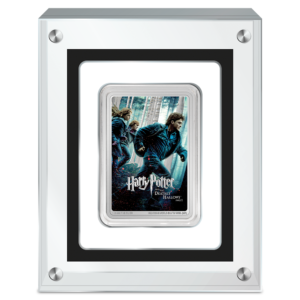 Only 5,000 of these coins are being minted, so get one before they sell out since they tend to do at a fast pace. Each coin is set at $95 and comes with a Certificate of Authenticity, as well as the custom-made Harry Potter packaging.

New Zealand Mint has previously created many other Harry Potter collectible coins to fill up your magical collection, including all the films as movie poster coins. With the release of the Deathly Hallow – Part 1 coin, there is only one left in the series to be made, that being Deathly Hallows – Part 2. Be sure to get the whole beautiful set before they sell out!

New Zealand Mint also sells coins of iconic Harry Potter characters, such as Lord Voldemort, Dobby, and Albus Dumbledore, so there’s something for every fan of the series. 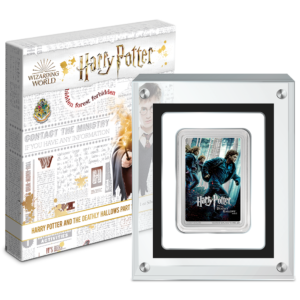 New Zealand Mint has an extensive collection of collectible coins for any fan. Which is your favorite?