The Slow Redemption of Percy Weasley

Percy Weasley is a character with a long and often painful redemption arc. His goals are so important to him that he’s frequently willing to set others aside in pursuit of his ambitions.

When we first meet Percy Weasley, he is on Platform 9 3/4 trying to help Harry get to the Hogwarts Express. Percy manages to work the word “prefect” into the conversation in seconds, and this initial meeting really sets the tone for Percy’s relationship with Harry. Most of Percy’s interactions with him this year are formal, such as when Percy shakes Harry’s hand as Harry sits at the Gryffindor table or when Percy advises Harry to be wary of Peeves. It’s hard to get the entirety of Percy’s personality from just these few interactions. Still, Percy seems more interested in his relationship with Harry than he is in Harry as a person.

Harry Potter and the Chamber of Secrets shows a slightly more colorful version of Percy. Ginny is now at Hogwarts, and Percy takes responsibility to keep her out of trouble. When Percy catches Harry and Ron coming out of a girls’ bathroom, he encourages them to think of Ginny’s feelings. Still, Ron identifies that Percy is only worried about losing his chances at being Head Boy. Percy really shows his true character here – he seems worried about Ginny, but he doesn’t bother to find out what is actually upsetting her.

In Harry Potter and the Prisoner of Azkaban, Percy is named Head Boy, and he is insufferable. He’s not yet at school, but he carries around his Head Boy pin with him everywhere he goes. Later, Percy bets Penelope Clearwater ten galleons on the outcome of the Ravenclaw vs. Gryffindor Quidditch match, then privately confesses to Harry that he hasn’t got ten galleons. This is a perfect example of Percy’s ambitions getting him into trouble, as he would have looked very foolish if Harry hadn’t managed to win the game.

The tone shifts during Harry Potter and the Goblet of Fire, and Percy Weasley shines in his job at the Ministry working for Barty Crouch Sr. in the Department of International Magical Cooperation. During the tournament, Percy is promoted to Crouch’s personal assistant. He is so focused on making sure that it looks like he’s doing a good job that he covers for his boss’s repeated absences. Eventually, it turns out Percy has been following the instructions of an Azkaban escapee, which has reflected badly on him and causes him to be called in for questioning. For the first time, Percy pays the price for his overeager goals.

In Harry Potter and the Order of the Phoenix, Percy creates a rift with his family and throws his lot in with the Voldemort-denying Ministry of Magic. Percy cuts his family deep by promising that “he was going to make sure everyone knew he didn’t belong to our family anymore” (OotP 72). Additionally, Percy returns his hand-knit Christmas sweater to the Burrow with no note and does not visit his father at St. Mungo’s. Order of the Phoenix is possibly the lowest of the low for Percy – he puts the Ministry, his job, and his ambitions ahead of the people who love him the most. 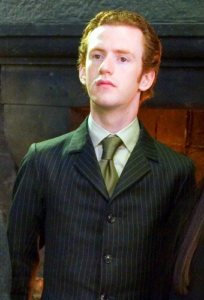 Harry Potter and the Half-Blood Prince begins a slow tick upwards for Percy’s character. Voldemort’s return has upended his world at the Ministry, and although this could allow Percy to come forward to his family and apologize for the horrible things he said and did in Order of the Phoenix, he remains too proud to do so. Later, it seems like Percy is ashamed for letting his ambitions get the better of him – he sheepishly shows up at the Burrow at the command of the Minister of Magic, but no one wants him there (except Molly), and Percy knows it.

The Return of Percy

In Harry Potter and the Deathly Hallows, Percy is notably absent from the wedding, which causes his mother some distress. We discover that the Ministry has fallen during the reception, and it looks like Percy is still working for the Ministry despite knowing who is now in charge. Perhaps his ambition has gotten the better of him again.

At the Battle of Hogwarts, Percy runs into his family almost immediately and sets about trying to reconcile. He calls himself a fool and admits to being a “Ministry-loving, family-disowning, power-hungry moron” (DH 606). His apology is accepted, and several of his family members embrace him. Percy is present for Fred’s last moments during the battle, shaking Fred by the shoulder and trying to shield his brother’s body from further damage. This shows that Percy loves Fred very much.

After the war, Percy goes back to the Ministry and becomes a high-ranking official under the new Minister of Magic, Kingsley Shacklebolt. Later in life, he marries and names one of his two daughters Molly, in honor of the mother who never lost faith in him. We get to see Percy’s full potential finally being fulfilled – this time, not at the expense of the other important things to him.