It’s no secret that fans will go to great lengths for the Wizarding World fandom, but one Utah man has taken that to new heights. While some fans would settle for a visit to a castle, KSL reports that Wade Poulson has built a castle in his Duchesne, Utah, front yard that is taller than his own house. 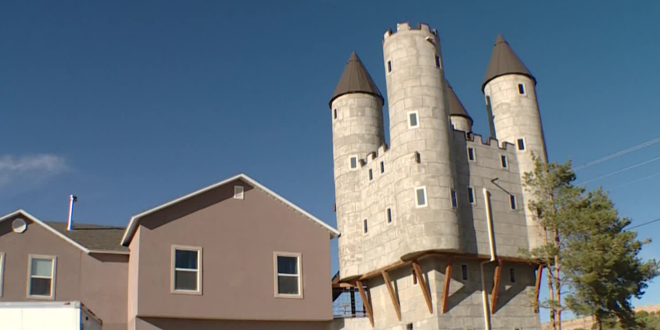 Poulson began construction on the project in 2018, and KSL reports that the castle is now 2,000 square feet in area and eight stories tall. He decided to build it for his then four children (now five), fans of the Harry Potter series, though Poulson explained that he ran into a few issues with the city.

‘When I first called them, I told them I wanted to build a multilevel, kind of an elaborate, big playhouse and what do I need to do as far as permits and stuff like that, and they said[,] “I don’t think you need a permit for a playhouse[,]” and I said, “Well[,] this isn’t going to be an ordinary playhouse,”’ Poulson said. ‘A year later, as we’re framing it up to about where it starts getting bigger, where it expands out, about a third of the way up there, then I get a call from the city (saying), “You’re going to need a permit.”’

It isn’t just the structure of the “elaborate, big playhouse” that has taken over two years to build. Poulson explained that the interior also features themes on each story of the castle.

‘We’ve got the dungeon, we’ve got a 40-foot tunnel coming up from that into the basement, it has a second floor, come up the stairs into the “Great Hall” where we’re sitting now, that’s the third floor,’ Poulson outlined. ‘“Gryffindor Dormitory” is the fourth floor, up the stairs to the fifth floor where the library is and the “Prefects’ Bathroom,” up the spiral staircase to the sixth floor, and then we have a seventh floor above that on each tower room and on three of them we have an eighth floor in the columns above that.’

There is also a 70-foot slide, KSL notes, although Poulson explained that that idea came from one of his children. Even better? Their neighbors just happen to have the last name Potter.

For more on Wade Poulson’s castle, you can read the article or watch the accompanying news clip from KSL.

Would you build a castle this large in your front yard? Tell us your thoughts in the comments below.