Replacing the former 007 Bond Exhibit at the London’s Museum of Film, the Photographic Exhibit offers a bite-sized version of the Warner Bros. Studio Tour London, with a selection of props, costumes, books, and original behind the scenes photography to delight Harry Potter and film fans alike. The exhibit also features London’s first and only official Butterbeer Pub.

Upon entrance, the flying Ford Anglia, along with a stream of floating Hogwarts letters, wait to greet you as you are guided to the underground exhibit and the first of many beautifully taken pictures. 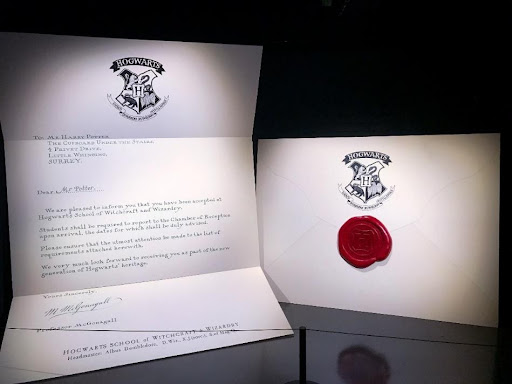 The exhibit itself is split into several different sections, including original translated books from around the globe that detail the phenomenal impact that the Harry Potter stories had, the design of the Knight Bus and Leaky Cauldron, the inspiration and history behind the making of the Hogwarts Castle, and various costumes, including, Voldemort’s heavy, silk robed garment. These snippets of cinematic history allow visitors to discover the sheer amount of hard work and dedication that went into making the movies. There are also plenty of guides available to provide fun Potter facts and green screen photographic opportunities such as catching a Snitch and entering the Ministry of Magic. There is also the chance to have your own Ministry of Magic ID card created. 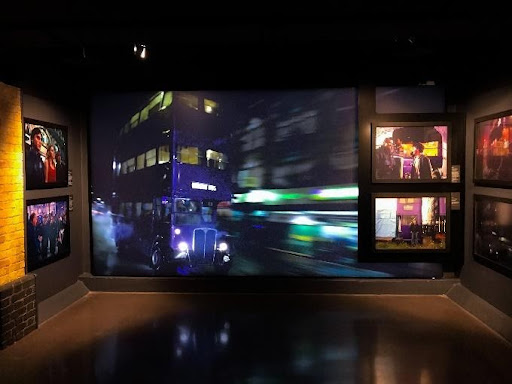 Whilst the Studio Tour provides a high level of interaction between the multitude of sets and mock-ups, the Photographic Exhibition opens a world of behind-the-scenes images that will leave fans reminiscing about their favorite scenes and how they came to be, including a series of laid-back images featuring Ralph Fiennes dressed in a casual tracksuit and trainers, whilst sporting very little visual effect makeup. We are so often confronted by the infamous image of Voldemort’s sinister appearance that we can often forget the man behind the mask. Photographs like this add a different touch of magic, making you appreciate the high level of acting that went into playing these characters.

There is also a more intimate and personal feel to the exhibit, as props – which are also on display at the Studio Tour – can now be examined in a closer and more personal way, including the Gilderoy Lockhart books and potion props. 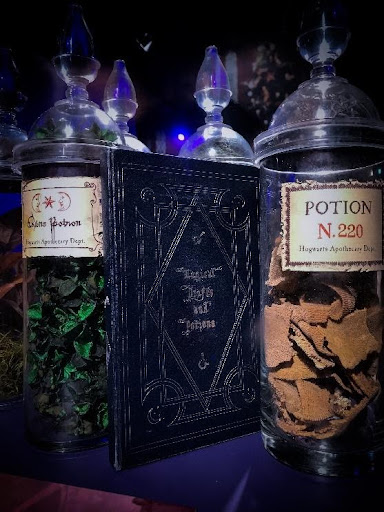 As you come to the end of the experience, you’re treated to a glimpse of Fantastic Beasts and Where to Find Them stills, including a small mock-up of MACUSA, as well as props and costumes from Harry Potter and the Cursed Child, which provides just enough information for fans to see the mechanics of the play without spoiling the overall plot.
But as you reach the end of the exhibit, you come to the main attraction that most fans will be highly anticipated and delighted to see – the Butterbeer Pub.

Designed to look and feel as authentic as a British pub can get, the Butterbeer Pub offers a relaxing environment before heading back into the hustle and bustle of Central London.

There is also the chance for Potterheads to get their hands on a newly designed tankard, along with a selection of delicious Harry Potter-themed cakes that look almost too good to eat (I say almost). 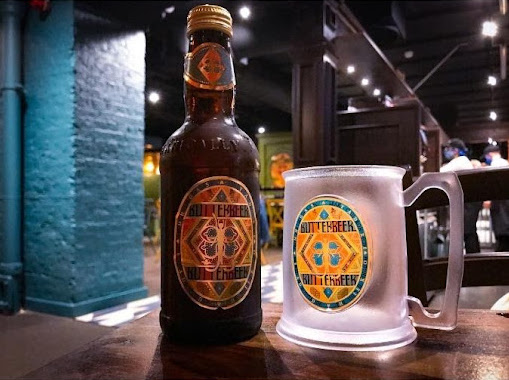 Whilst small, it is the jewel in the exhibit’s crown and certainly adds another layer to your day. It also can’t be denied how much it resembles the Hobbit houses from the Lord of the Rings, with the richly green circular wooden booths – that were proving a popular seating area for visitors – resembling that of Bilbo’s front door.

The gift shop at the end offers a humble selection of Potter merchandise before transporting you back into the Muggle world of Covent Garden.

While the Harry Potter Photographic Exhibition doesn’t provide you with the same high level of wonderment as the Studio Tour does, it delivers a more personal feel to the wizarding world, showcasing an array of wonderful photographs and artifacts that you may not be able to see this closely elsewhere.