The Harry Potter films are being brought to life at Universal Orlando Resort with the return of “Dark Arts at Hogwarts Castle,” a magical takeover of Hogwarts Castle involving an “ominous spectacle of light and music.”

The event, which first debuted in September 2019, involves a mysterious Dark Arts takeover throughout Hogwarts Castle and Hogsmeade Village in the Wizarding World of Harry Potter – Hogsmeade at Universal’s Islands of Adventure. 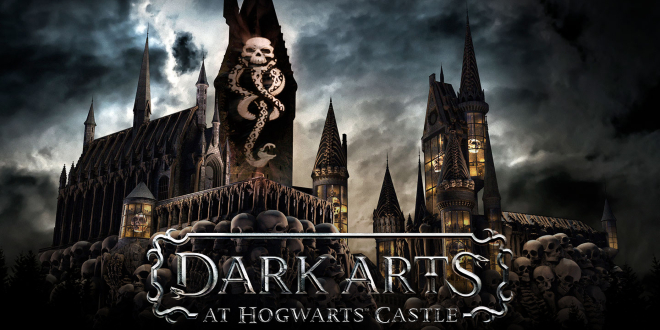 The event will take place at dusk as Hogsmeade falls into darkness, and the village will flood with an ominous green light and fog. Death Eaters will appear throughout the village, lurking among guests with “complete disregard of wizarding laws.”

As darkness falls on Hogwarts [C]astle, Dementors, Death Eaters and other unspeakable creatures cloak the stone walls in sinister images and fiendish magic. Chaos erupts as the image of Lord Voldemort joins the fray, summoning his cruel legions to swarm the castle. Stare in awe at the castle’s takeover during this ominous spectacle of light and music.

Creatures and villains, including Dementors, Aragog, mountain trolls, and Thestrals, will be beamed onto Hogwarts Castle in an “awe-inspiring display of light, music and special effects,” which involves an “atmospheric musical score” by John Williams. Guests will need to summon all their courage and magic when bravely facing Lord Voldemort, and the spectacle will conclude when a Patronus Charm is cast, providing a glimmer of hope in the darkness.

Ready to experience the Dark side of magic? Join us at #WizardingWorldOrlando beginning September 18.

There isn’t long to go until the event begins, which will run nightly starting September 18, beginning at dusk and ending when the park closes.

In the meantime, give the video below a watch; it shows the original premiere of “Dark Arts at Hogwarts Castle” at Universal Studios Orlando, and it is sure to make you eager to witness the spectacle in person!

The darker side of the Wizarding World will once again return to Universal Orlando Resort this fall, running nightly beginning Saturday, September 18 in [t]he Wizarding World of Harry Potter – Hogsmeade. These breathtaking experiences use state-of-the-art technology, like projection mapping, special effects and lighting, to bring iconic moments and unspeakable creatures from the Harry Potter films to life.

As darkness falls in Hogsmeade, the all-consuming Dark Arts will be unleashed as ominous green light and fog floods [sic] the village. Death Eaters – devoted followers of Lord Voldemort – will appear and lurk amongst guests with complete disregard of wizarding laws.

Soon after, guests will witness sinister creatures and villains – such as Dementors, Aragog, [m]ountain [t]rolls, Thestrals and more – cloak Hogwarts [C]astle in an awe-inspiring display of light, music and special effects. Guests will be asked to summon their inner strength and bravely face the visage of the powerful Dark wizard Lord Voldemort. Then, find a moment of hope hidden in the darkness as the Patronus [Charm] – one of the most famous, difficult and powerful defense of the Dark Arts charms in the Wizarding World – is cast.