“Harry Potter and the Sorcerer’s Stone” to Be Screened in Great Hall at Warner Bros. Studio Tour London

Fans attending the event are welcome to relive the film where it first began and will be able to watch the first Harry Potter film on the set of the Great Hall, where some of the most iconic fan-favorite scenes were filmed.

Over the weekend of November 19–22, the film will be screened each night to celebrate its 20th anniversary. In addition to the film experience, visitors will be able to explore the famous sets and get a mug of butterbeer before returning to the Great Hall after visiting hours for the special and exclusive screening. 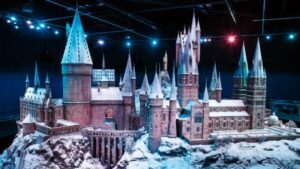 Hogwarts in the Snow at Warner Bros. Studio Tour – The Making of Harry Potter

The Great Hall will be festively decorated for the screenings since the Hogwarts in the Snow event will be open by this point. Hogwarts-themed beanbags will be placed around the room, facing the screen, for those joining to kick back and relax.

The final screening on November 22 will be adapted specially for visitors who are on the autism spectrum. There will be specific adjustments to help reduce stress and sensory input in visitors, including low lighting, low sound, staff on hand to help, and more freedom to move around the Great Hall.

The exclusive tickets also include a butterbeer drink or ice cream, a hot meal from the café, one soft or alcoholic drink from the café, and a “movie treat” from the Honeydukes trolley.

Tickets are available starting September 30 at 10 a.m. BST, and prices differ. Who else is immediately saving up some money to bag themselves a ticket?