Bradley plays lost soul Roy, a lonely, reclusive widower who spends his days cold-calling strangers from the phone book, searching for companionship, even for the briefest of moments. But when he accidentally calls an adult hotline worker, Cara (Rachel Shenton), an unlikely friendship is born. 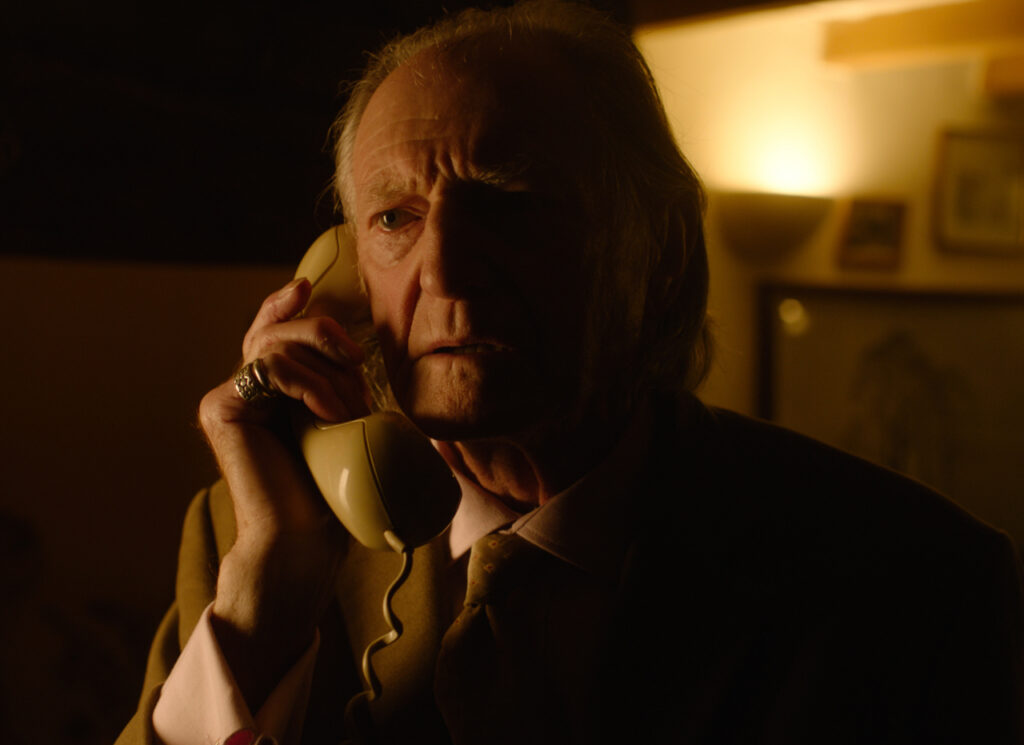 Although he may be best known to us as Filch, Bradley is a prolific actor who has been cast in many television shows and movies over the years. Outside of the Potter franchise, he has played Walder Frey in Game of Thrones, Ray Johnson in After Life, Gillenormand in the TV miniseries of Les Misérables, and Arthur Webley in the movie Hot Fuzz, among many others.

Alongside Bradley is Rachel Shenton, starring as Cara. Shenton is a British actress known for her roles in Genie in the House, Switched at Birth, and most recently, All Creatures Great and Small – also starring Matthew Lewis. She won an Academy Award for her short film, The Silent Child, in 2018.

Roy is written and directed by Tom Berkeley and Ross White. The pair met in college and began collaborating shortly afterward. Their earlier theater works were shortlisted for various writing awards (the Bruntwood Prize for Playwriting, the Papatango Prize, and the Kenneth Branagh Award for New Drama Writing). Roy is their filmmaking debut.

Speaking to Slick Films, one of the production companies behind the short film, Berkeley and White spoke about where the inspiration for Roy had come from. Using their own family experiences, they considered how losing someone you have spent a lifetime with could affect someone. They both felt that it was a subject they had “not seen explored very much on[-]screen.“

Aware that the film could easily become “a very depressing fifteen minutes,“ Berkeley and White knew that it needed a “lightness in the telling and a sense of hope at its core.” The duo wanted to bring humor to the film, alongside the portrayal of grief and isolation.

So while David’s beautiful performance may bring a tear to your eye, we hope that it’ll make you laugh as well. I think that’s something that often gets left out of on-screen portrayals of grief: no matter how deep the sorrow, there are flecks of joy, but in the pleasure, there is sadness there, too.

Berkley and White also spoke about what it was like to work with Bradley, and they stated how much of a remarkable actor he is and spoke of his kindness.

As well as being a remarkable actor and very much at the height of his powers, David is an extremely kind and generous man. [..] It says a lot about David that he would receive a script from a pair of unknown writer/directors and treat it with the same respect as the many others he no doubt is sent. He seemed to immediately resonate with the character and the style of story we wanted to tell, and we were delighted to be able to have him on board.

In early 2021, Roy made its world premiere at the 36th Santa Barbara International Film Festival in California. It was the only British film selected to play in the Short: Fiction category. The short film has also been selected to be shown at various other festivals. Have a look at the Instagram page for all the details.

If this has whetted your appetite, then take a look at the trailer below.

Roy looks to be an emotive and heartwarming tale. We wish everyone involved in the making of the film all the best of luck at the upcoming festivals it has been selected to be shown at. Have you watched Roy yet? Or do you plan on watching it at one of the up-and-coming festivals?