“We Even Want to Put an Invisibility Booster Button in!”: Vlogger Restores 1960s Ford Anglia

Full-time vlogger and Harry Potter superfan Cherry Wallis has taken her love for the Potter franchise up a gear and is making a replica of the Weasley family’s flying Ford Anglia.

Wallis has over 700K YouTube subscribers and celebrated Back to Hogwarts Day by participating in the special livestreamed Back to Hogwarts Global Fan Celebration on September 1. During the celebration, she described herself as “probably one of the biggest Harry Potter fans you’ll probably ever meet,” met Tom Felton (Draco Malfoy), and went against the creator of the Pottah Parody series, Chanel Williams, in three challenges.

I guess I’m stuck with these two in the carriage on the Hogwarts Express today… 🚂 pic.twitter.com/3Dy7XX2O0h

Wallis’s Ford Anglia project is taking place in her garage. With the help of three friends, she is giving the car, which is from the 1960s and is the same blue as the one seen in Harry Potter and the Chamber of Secrets, a magical transformation.

I know nothing about engineering or mechanics, but we’ve stripped it down and are getting the body work done. It’s currently a bit of a rust bucket, but the plan is to restore it back to its former glory.

We even want to put an invisibility booster button in it. I wouldn’t have it if it wasn’t for my love of Harry Potter! 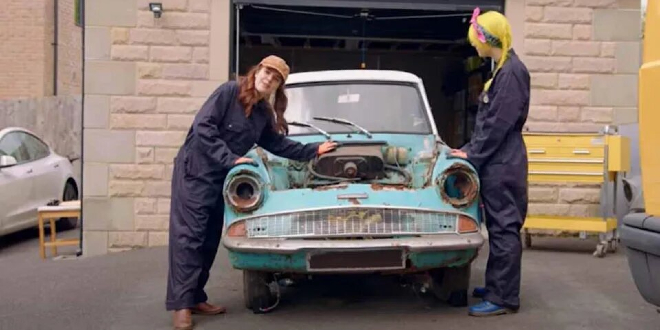 Surprisingly, Wallis wasn’t always a fan of the franchise; while the first film was released when she was 11 years old, she didn’t become a member of the Wizarding World until her late teens.

My brother, who is three years older, actually bought his first Harry Potter book in around 1997 when he was 10 years old. I got into it a lot later when I was around 17. His book was lying around, and I just picked it up to read, as I was bored and saw it lying around.

Afterwards I was like, ‘How have I slept on this?’ I’ve been obsessed ever since.

Wallis started a YouTube channel in 2011, but it didn’t become Harry Potter-focused until 2016.

I was studying at university; my videos weren’t really a set format until I started talking about Harry Potter. They were a bit of everything – YouTube challenges, chatting to my friend. It was completely different [from] what it is now.

Then I got sent a replica of Newt Scamander’s suitcase for Fantastic Beasts and Where to Find Them. When I posted it on my YouTube [c]hannel, it just blew up. I met amazing people; the fan community for Harry Potter is incredible.

Wallis is now a full-time vlogger, filming videos of herself dressed up and cosplaying as the characters we know and love from the wizarding world. 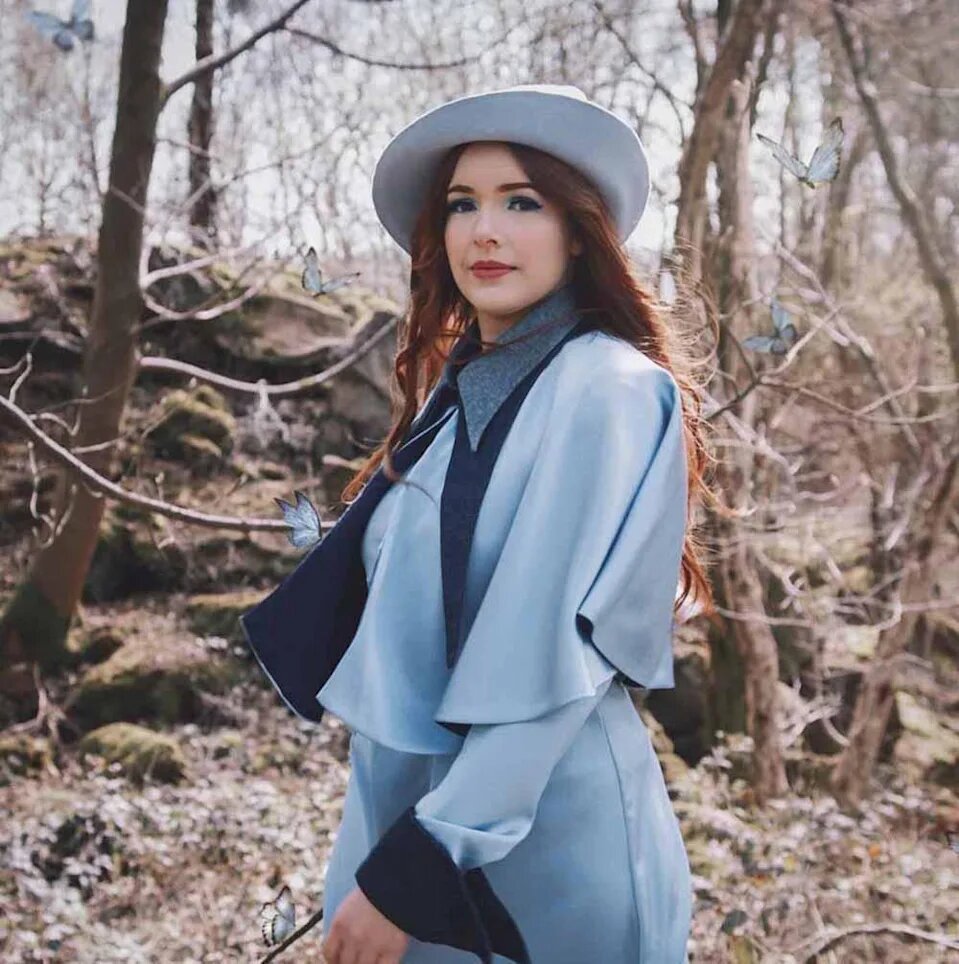 Wallis has transformed into Beauxbatons student Fleur Delacour, wearing her iconic blue uniform and hat, but it is quirky Ravenclaw Luna Lovegood with whom she identifies the most.

I feel as though that was perhaps me in school, so I related to that a lot. I like how different she is and she’s unapologetic about being herself. I think that’s a really strong message. 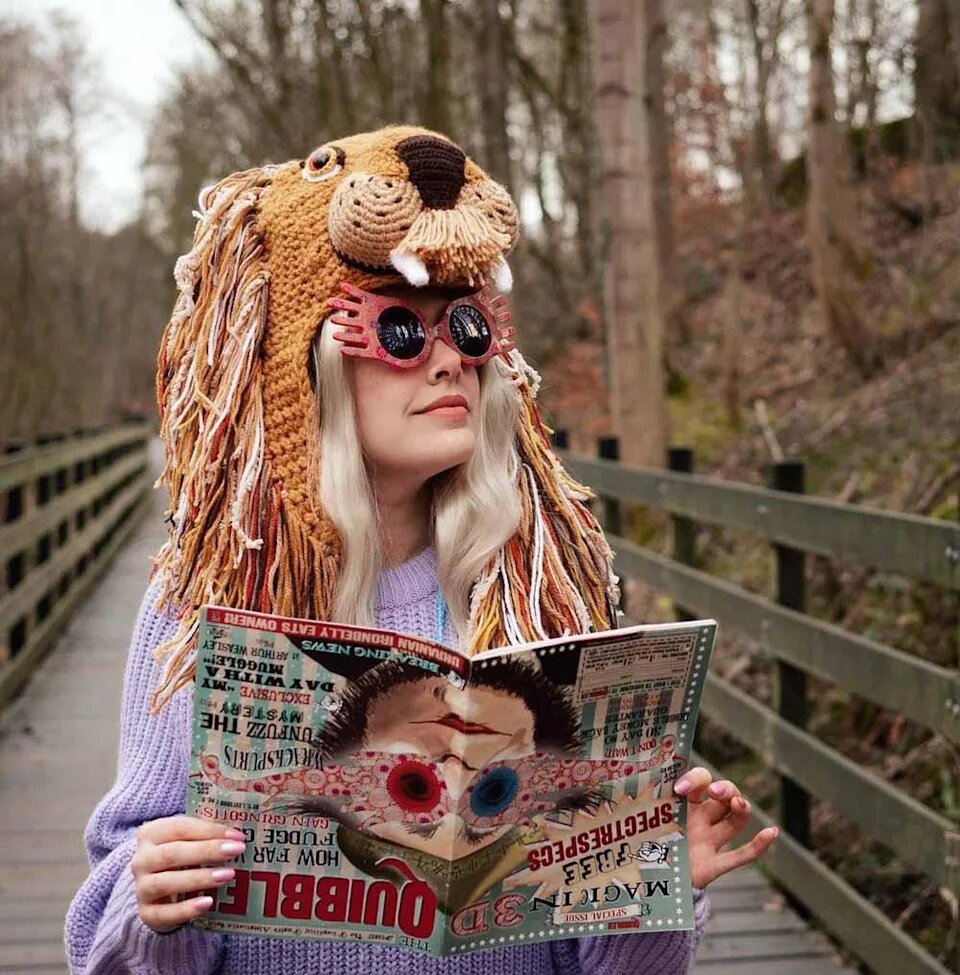 Wallis’s job has opened up many exciting opportunities for her: She has visited Warner Bros Studio Tour London – The  Making of Harry Potter over 30 times and calls it her “second home.” She has interviewed Warwick Davis (Professor Flitwick and Griphook) and met James and Oliver Phelps at the recently opened Harry Potter Photographic Exhibition in London, where, to their surprise, she revealed that she had attended the same school as them, even producing a photo of her in the uniform to prove it!

The wizarding world has also introduced Wallis to new friends, creating many magical memories along the way.

I get to do my dream job every day. It’s the most amazing community. If I hadn’t had started vlogging about Harry Potter, I wouldn’t have met my friends.

I think its [sic] easier to list what it hasn’t changed when it comes to how the franchise has changed my life.

We couldn’t have said it better ourselves, and we can’t wait to feast our eyes on Wallis’s finished Ford Anglia!