“I’ve Never Seen a Set Built Like That Before”: Tom Felton Featured on Back to Hogwarts Livestream

Today – September 1 – kick-started the 20th-anniversary celebrations of the Harry Potter and the Sorcerer’s Stone film. Wizarding World Digital is celebrating each week of this month in the lead-up to the anniversary, beginning with a Back to Hogwarts event.

This morning’s Back to Hogwarts livestream started at 10:30 a.m. BST and took fans right up to 11 a.m., the same exact time that the Hogwarts Express would be leaving for students to return to the magical school. The livestream was hosted by DJ and self-confessed Harry Potter fanatic Yinka Bokinni, and she was joined by none other than Tom Felton for an exclusive interview to surprise fans. 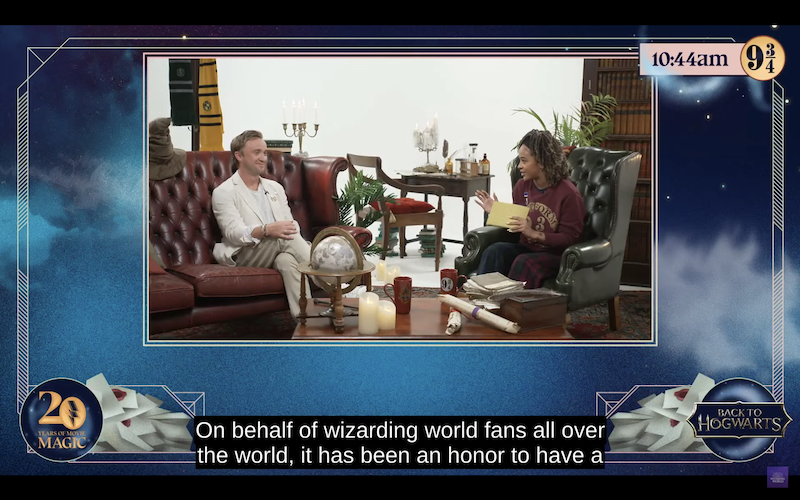 During the livestream, Tom recounted that his favorite memory from filming the first movie was seeing the Great Hall set for the first time. “I’ve never seen a set built like that before, or since,” he exclaimed before delving into the story of the first time he walked into one of Hogwarts’s most recognizable rooms. He explained that the crew kept all the cast outside of the Great Hall, so that it would be a surprise for them and they could capture their reactions on camera.

He went on to say, “All of the cast’s reactions were genuine in that moment; we hadn’t seen it before, so it was a complete surprise.” Tom was also accompanied on the livestream by two superfans, Cherry Wallis and Chanel Williams, for fun, games, and impressions! 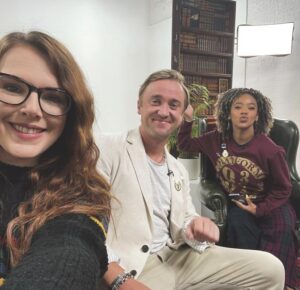 As most Potterheads know, September 1 is one of the most important dates on the Harry Potter calendar, if not the most important, so it is always special. In addition to this exciting livestream, Wizarding World Digital is involving fans in 20 magical moments on the 20th Anniversary Hub. Every Wizarding Wednesday, fans can get involved in quizzes and games and learn secrets from the cast and crew. There is also now a platform nine and three-quarters Instagram filter created by Wizarding World Digital, celebrating the anniversary. Fans can try it out by visiting the official Instagram page.

Did you catch Tom Felton on the Back to Hogwarts livestream? If you missed the magic, you can catch up below.

TOM FELTON REVEALS HIS FAVOURITE MEMORY FROM CREATING HARRY POTTER AND THE PHILOSOPHER’S STONE DURING BACK TO HOGWARTS LIVESTREAM EVENT
Tom Felton joins Back to Hogwarts livestream to kick[-]start 20th[-]anniversary celebrations of ‘Harry Potter and [t]he Philosopher’s Stone’ film, revealing that the cast were kept out of [t]he Great Hall until the day of filming

Tom, who plays the part of Draco Malfoy in the Harry Potter series, joined Yinka in an exclusive interview to kick of [sic] the 20th[-]anniversary celebrations of the Harry Potter and Philosopher’s Stone film. Yinka was also joined by Harry Potter superfans Cherry Wallis and Chanel Williams, who got involved in quizzes and games, testing their knowledge on Harry Potter trivia.

During the interview, Tom revealed his favourite memory from creating the first film, commenting, “The set of [t]he Great Hall was fantastic – I’ve never seen a set built like that before, or since.” He went on to explain that the crew kept the cast outside of [t]he Great Hall, so it was a surprise for them. He said, “All of the cast’s reactions were genuine in that moment, we hadn’t seen it before, so it was a complete surprise.”

September 1st is one of the biggest days [on] the Wizarding World calendar, marking the moment when students of all ages head back to Hogwarts School of Witchcraft and Wizardry. This year’s Back to Hogwarts celebrations were extra special this year, as this November marks twenty years since the release of the first Harry Potter film, Harry Potter and the Philosopher’s Stone. Fans can watch the livestream on[-]demand on the Wizarding World YouTube Channel and can follow the excitement on social media with #20YearsofMovieMagic.

Self-proclaimed lifelong superfan Yinka commented, “I really can’t believe it’s been 20 years! It feels like yesterday – I remember seeing the first film with my brother at the cinema, and it was so magical. That was the moment I knew I’d be a fan for life.”

Tom also shared the exciting news that he was heading [b]ack to Hogwarts, posting some behind[-]the[-]scenes clips from rehearsals earlier in the week on his Instagram stories.

In honour of this special anniversary, between September and December, the Wizarding World invites the fan community to celebrate 20 Years of Movie Magic from Harry Potter and the Philosopher’s Stone. New exclusive content focused on 20 [m]agical [m]oments from the first film will be released every Wizarding Wednesday, including games, quizzes and secrets from the crew who brought it to life. Go to the 20th Anniversary Hub on WizardingWorld.com and check it out.

Fans can now to [sic] discover how it might feel to start their own journeys to Hogwarts by trying out the new Platform Nine and Three-Quarters Instagram filter, available on Wizarding World’s Instagram channel. In the words of Molly Weasley, “Best do it with a bit of a run if you’re nervous”!

The Wizarding World offers something for every fan to enjoy, from getting lost in J.K. Rowling’s original Harry Potter novels [and] reliving the timeless film magic through to exploring immersive retail experiences and discovering unique live entertainment, which brings the magic to life.

There is so much in store, including more details to come on the hotly anticipated ‘Harry Potter’ Quiz Show and a chance to find out which famous faces share your Hogwarts [H]ouse…fans are encouraged to keep their eyes peeled for more announcements and join the official Harry Potter Fan Club to be the first to get the latest news.