Let’s start with this award-winning, larger-than-life rendition of a Bertie Bott’s Every-Flavour Beans box. From the every-flavor bean bulge to the colorful cap, @MagicWandBlonde totally shines in her vibrant ensemble. 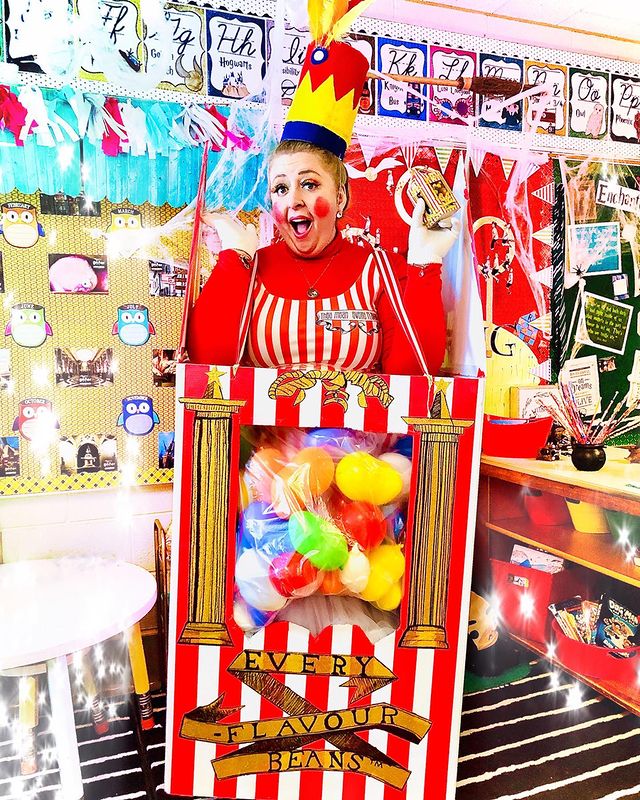 “This costume took a long time to make, but it was so much fun,” said Bailey. A teacher from Chicago, Bailey made the costumes to ignite some enthusiasm from her young students. You can see some of the costume’s “behind the box” construction here.

“The design is actually made from red and gold duct tape,” Bailey said. “For the hat, I taped two cardboard containers together, added felt, feathers, and a chin strap […] For the beans, I put scotch tape around the middle of the colorful balloons to give them more of a bean shape. Then I placed the balloons into a clear plastic garbage bag and tied it around my waist!”

For the next incredible costume, we have Brandy of @SimplyPotterGirl in one of the most clever and hilarious creations I’ve seen out there. Drawing inspiration from Harry Potter and the Half-Blood Prince, she created the armchair that Horace Slughorn disguises himself as. 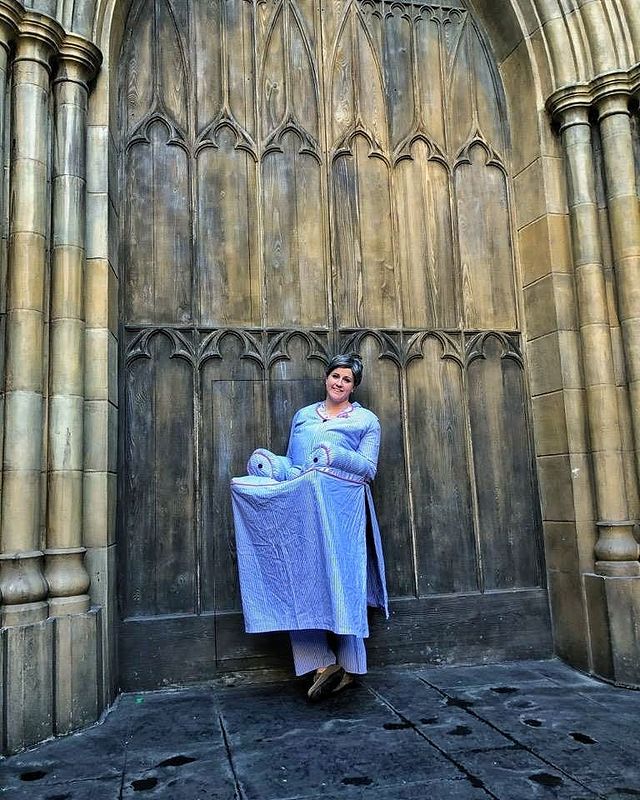 Next up, and earning a place on this list purely on the grounds of undeniable cuteness, is this outrageous baby mandrake costume by @WinklerAvenue. I love how clever and simultaneously achievable this is: Throw on your earmuffs, pot your infant, and boom. You’ve made pure magic.

Mind your earmuffs, and ten points to Hufflepuff! 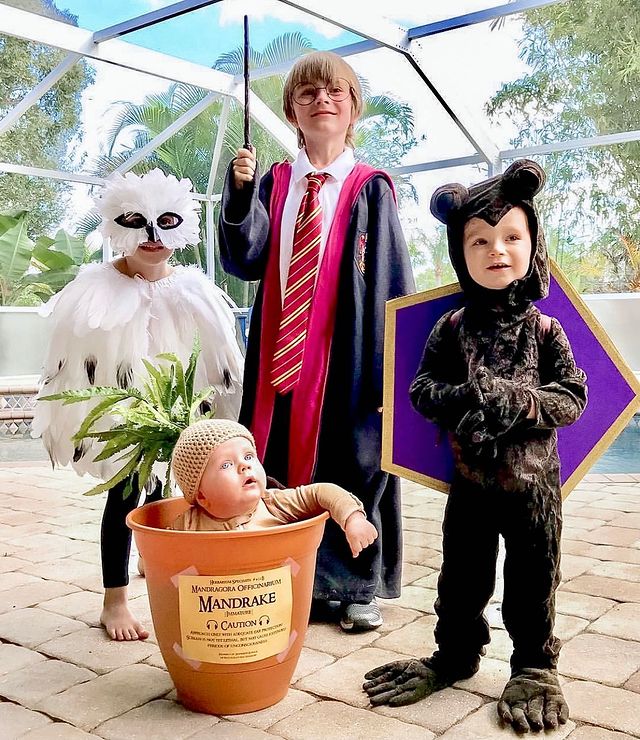 If, like me, you don’t have a baby to stick in a flower pot, not to worry. You can always just go the route of a cursed, wearable object. Check out this wildly detailed Horcrux I met at @LeakyCon about three years ago.

While waddling the show floor as a gigantic Remembrall, I came across Erin. She dressed as Tom Riddle’s cursed diary, and her costume turned lots of heads. It’s no wonder – her creation boasted an incredible level of detail and a very unusual scale. Here’s the front of her evil ensemble: 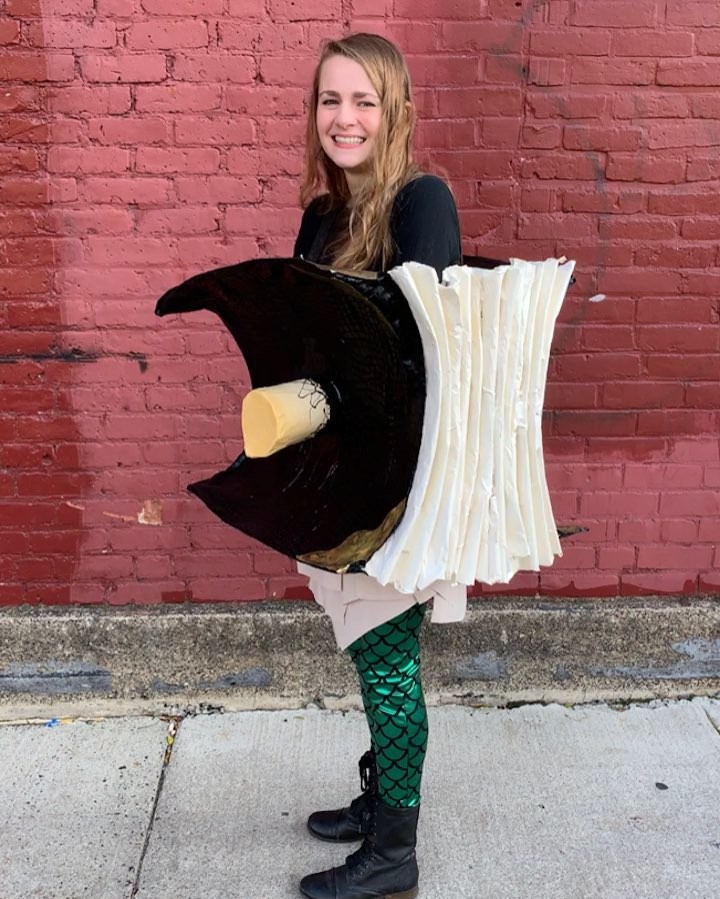 Before you ask, yes: That Basilisk fang goes all the way through. I mean, she had to make sure it was really dead before wearing a Horcrux. Duh. 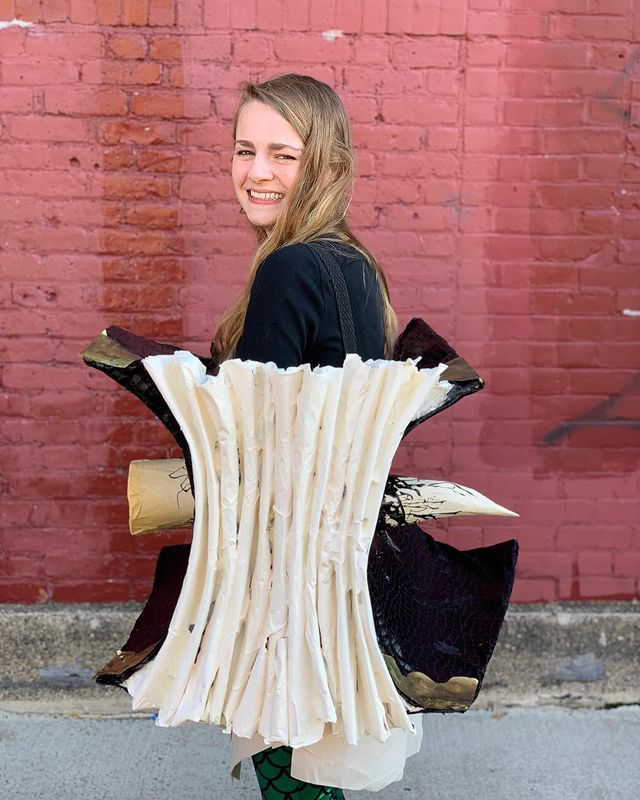 Costumes like Erin’s are my favorite. She drew inspiration from the books but used her imagination (and a ton of chicken wire) to make it unique.

That’s exactly what I love about this next fan. While searching the internet far and wide, I found Amy. A science teacher in Los Angeles, she goes by @BigFatLanyards, and her costume floored me: 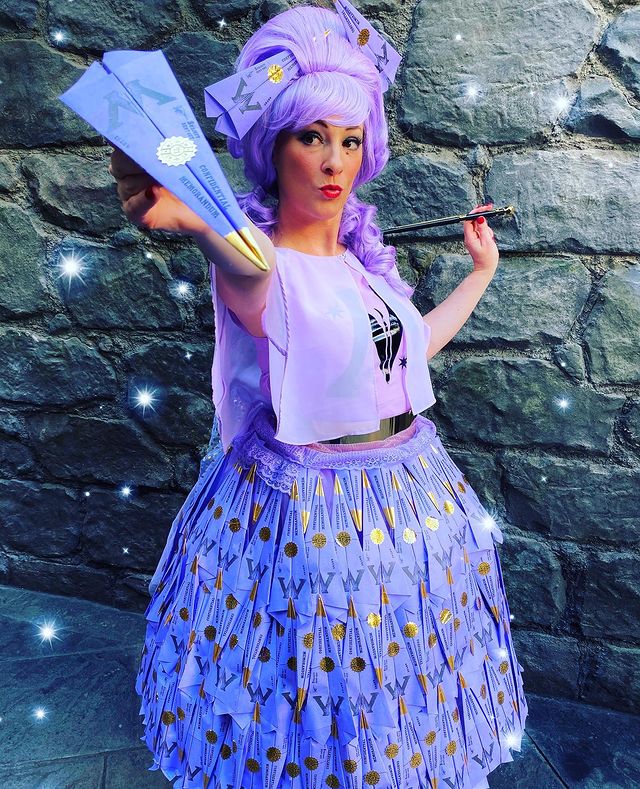 I had so many questions. And she was happy to answer!

“I tend to gravitate towards really random magical items, rather than characters,” she said. “I’ve done quite a few outfits, including Umbridge’s office, Monster Book of Monsters, sherbet lemons, love potion, Ministry memos, and Howlers.”

I had to know how Amy made her Ministry memos dress.

“[It] took quite a while,” she said. “I had to hand fold all of the paper planes and add foiling. I used the official memos from the Wizarding World of Harry Potter, and then created my own template and mass printed them on lavender card stock. […] I’m super happy with how it turned out and hope to use it again in some form in the future.”

I mean, I’d wear it to the office, but that’s just me. Amy’s creations are so extraordinary that I couldn’t just choose one. Check out her Howler costume: 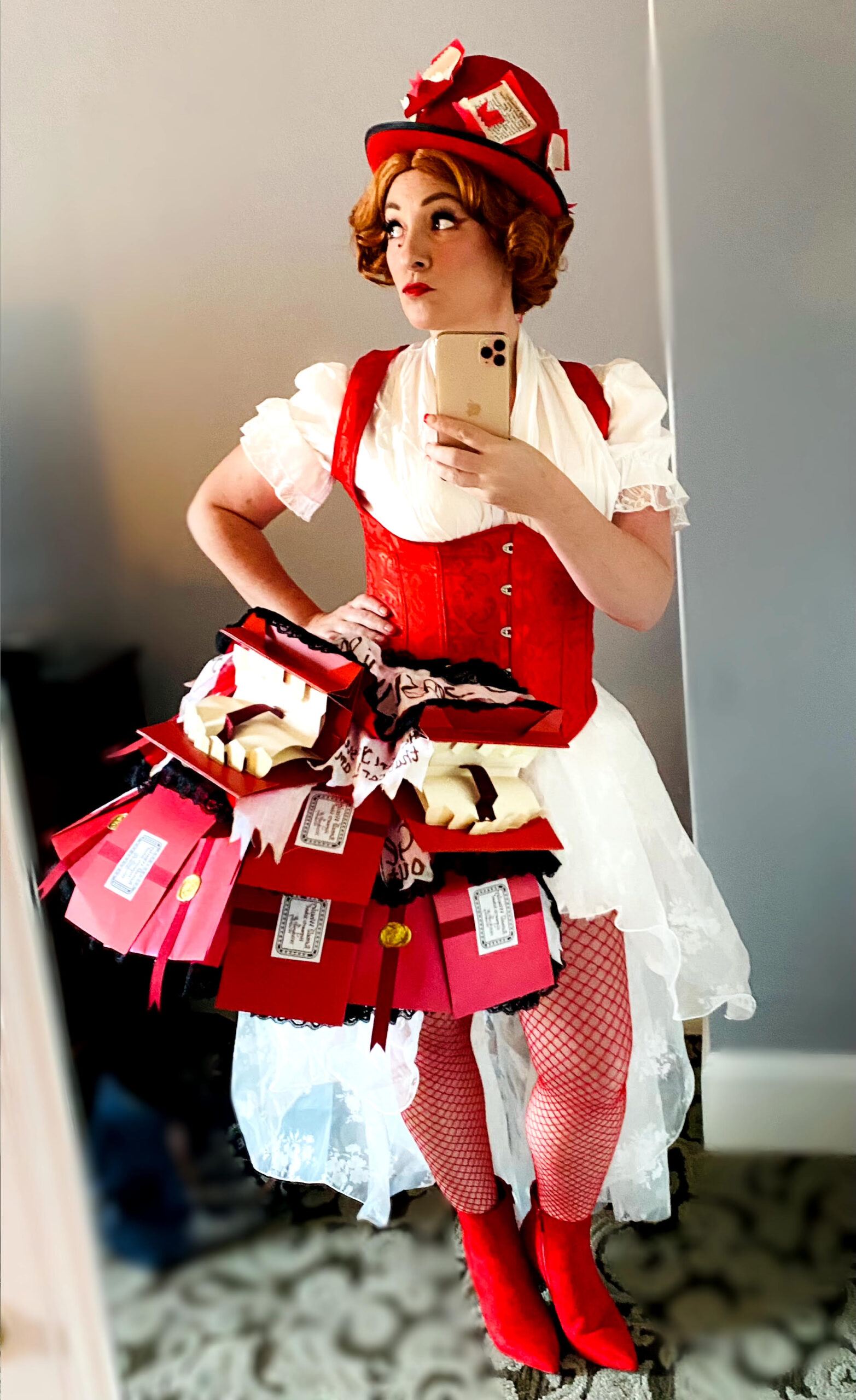 Rounding out these incredible creations is the most epic Fawkes costume imaginable. With individually curled and stained feathers, a metal-worked headdress, and fully movable, foldable wings—this is the mother of all costumes: 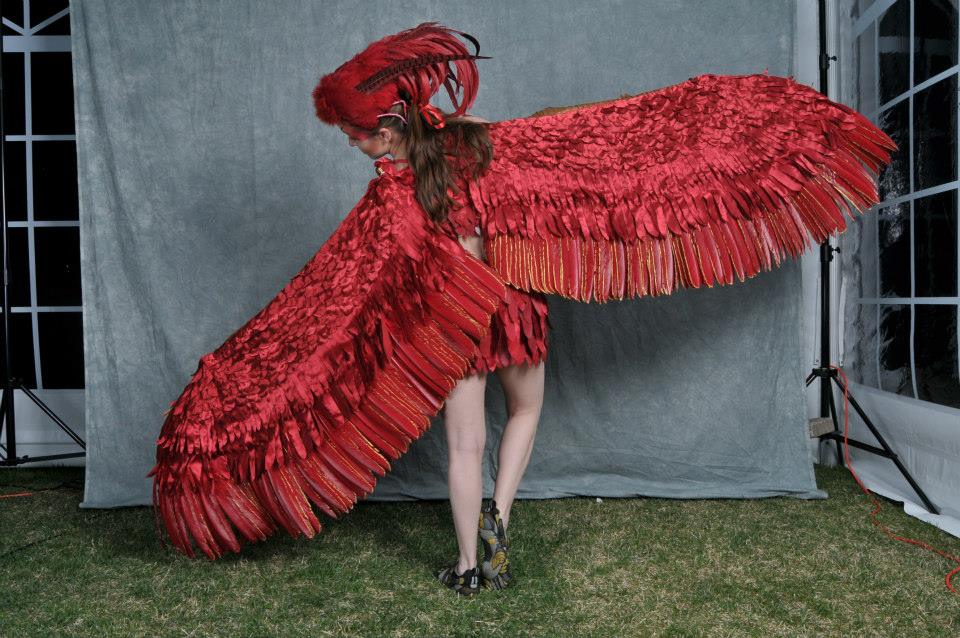 I had to know how this phoenix was made.  Josée, a proud parent and pro translator from L’Ange-Gardien, Canada was happy to satisfy my burning (see what I did there?) curiosity.

“Making [the] costume barely required any sewing,” she revealed. “The dress feathers are made out of fabric and were cut, burnt, painted, and glued one by one. […The tail] is removable (so I can sit), and is part fabric feathers, part real pheasant feathers that I dyed three different colors. […] I found a video showing wings that could open, fold, and flap. The lady who made it kindly taught me how to build my frame. I went to Home Depot and got help from an associate in the plumbing section. The poor guy was rather dumbstruck when I told him I needed his help to find fittings to make a bird costume!”

Totally worth it – the 20-pound wings are ten feet wide when fully opened. 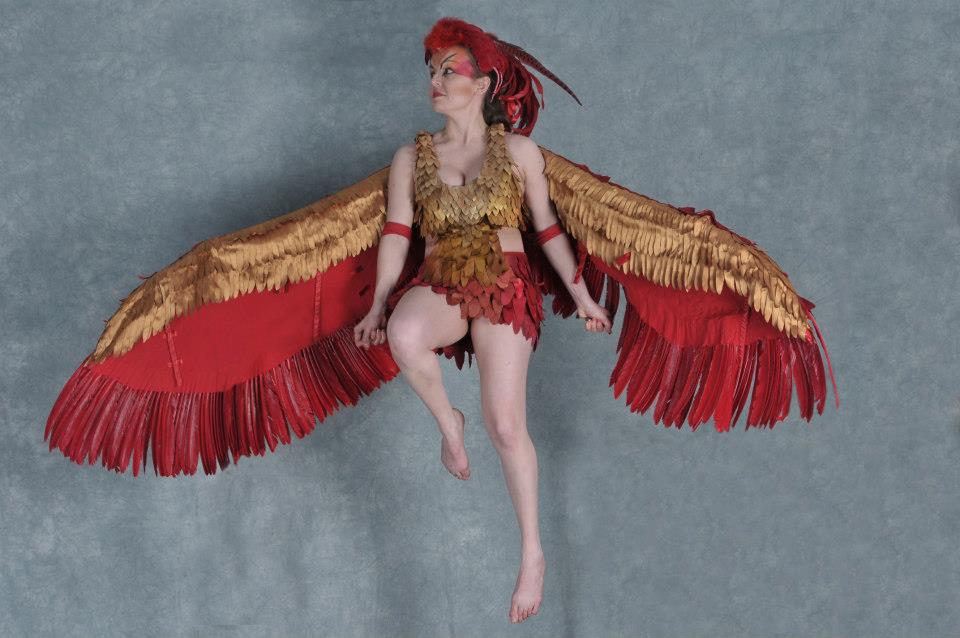 The wildest surprise? If you open one side of the wings, you’ll find signatures of famous Harry Potter actors inside of the frame.

At 25, I realized that all those times I snuck a fantasy book along with me as a kid—reading through countless math classes, family meals, sermons, and sporting events—wasn’t without reason. And so it was, that with just four jobs and the Harry Potter books to keep me warm at night, I earned my degree in Literature and Journalism in Boston, graduated with honors, and became a professional writer. These days, I'm a balanced, childless adult, building towards my reasonable aspiration of becoming a witch.