2022 Will Be Magical at Warner Bros. Studio Tour London – The Making of Harry Potter

2022 is going to be an extremely magical year for Warner Bros. Studio Tour London – The Making of Harry Potter. A brand-new feature, Magical Mischief, will reveal the filmmaking trickery behind the Harry Potter film series as it highlights the magical pranks and mishaps that graced the screen.

This feature will allow visitors to learn how some of our favorite mischievous moments from the films were brought to life. Upon entering the Great Hall, fans will recognize the set in honor of the infamous Weasley prank during the OWL exams that left Dolores Umbridge scrambling away in fear. The center stage will feature the two-piece costume of Umbridge and above that, the Weasley twins’ costumes on their broomsticks. 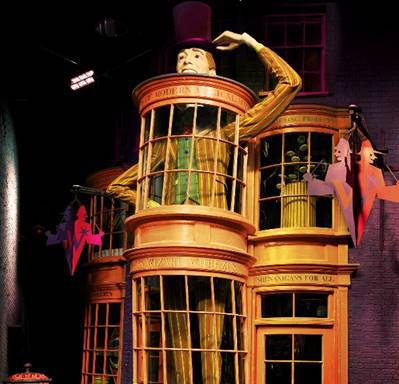 This feature will include demonstrations of camera trickery and how it created the disappearing effect of the Invisibility Cloak. Visitors will also get hands-on instructions on how to create their own origami Howler, which we came to know from Harry Potter and the Chamber of Secrets.

The Studio Tour will focus on magical mishaps that happen throughout the films – including how the special effects team created the fireplace letter scene inside the Dursleys’ home and how the creature effects team created Fred and George’s accidental beards from the Aging Potion and burned costumes in Harry Potter and the Goblet of Fire. Visitors will also spot Cornish pixies all around the Studio Tour and are encouraged to find them all and collect stamps as part of the Maurader’s Map activity passport. The Magical Mischief feature will run from January 22, 2022, to May 1, 2022.

This isn’t the only magical feature at the Studio Tour. The Dark Arts feature will return again in 2022 just in time for Halloween. Beginning September 23, 2022, until November 6, 2022, the Great Hall ceiling will be decorated with floating pumpkins and a decadent spooky feast covering the tables. Visitors can follow the Dark Mark trail, show off their wand combat moves against Death Eaters, and enjoy a darker and spookier Platform 9 ¾ and Diagon Alley. 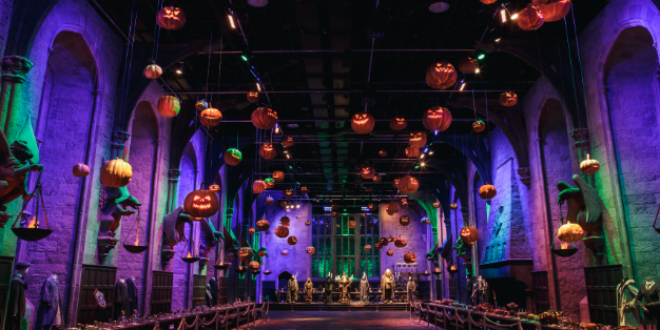 2022 will close with the return of Hogwarts in the Snow. This festive feature will run from November 12, 2022, to January 15, 2023. Visitors will find the Great Hall transformed into iconic scenes from the Yule Ball. Blankets of snow will embellish the Forbidden Forest, Diagon Alley, and Hogwarts Castle. The Gryffindor common room will also be dressed for the season. 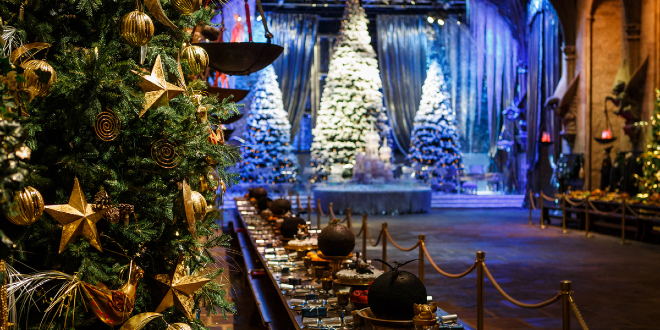 Hogwarts in the Snow feature at Warner Bros. Studio Tour London – The Making of Harry Potter

A magical 2022 is on the horizon, and we can’t wait to see the fun that accompanies these features. Are you excited about the new Magical Mischief feature? Let us know!

WHAT’S ON IN 2022 AT WARNER BROS. STUDIO
TOUR LONDON – THE MAKING OF HARRY POTTER

Brand[-]new for 2022, Warner Bros. Studio Tour London is set to reveal the filmmaking trickery behind the Harry Potter film series as it shines a spotlight on magical pranks and mishaps in the new feature Magical Mischief.

Visitors to the Studio Tour will learn how their favourite mischievous moments from the films were brought to the screen in this exciting feature. Entering the Great Hall, fans will recognise the set dressed for a Weasley prank [during] the peaceful O.W.L.s exam, complete with the swinging pendulum under the watchful eye of Dolores Umbridge. From the fan[-]favourite scene in Harry Potter and the Order of the Phoenix, the infamous pink two-piece costume of Dolores Umbridge will be centre stage, and visitors should look above to see the playful Weasley twins’ costumes on their broomsticks suspended from the Great Hall ceiling.

Demonstrations throughout the Studio Tour during this feature include how clever camera trickery created the disappearing effect of the [I]nvisibility [C]loak, and visitors will also be able to get hands[-]on to make their own origami [H]owler, just like the one Mrs Weasley delivered to her son in Harry Potter and the Chamber of Secrets.

The Studio Tour will be highlighting the magical mishaps that happen throughout the films, including how the SFX [t]eam created the infamous fireplace letter scene inside [number four,] Privet Drive and Fred and George Weasley’s accidental beards and burned costumes after they put their names into the Goblet of Fire, created by the [c]reature [e]ffects [t]eam. Eagle-eyed visitors will spot a number of pesky Cornish [p]ixies on the loose around the Studio Tour and are invited to find them all and collect stamps as part of their Marauder’s Map activity passport.

The Studio Tour’s popular Dark Arts feature will return for Hallowe’en in 2022, with the Great Hall ceiling decorated with over 100 floating pumpkins as well as a spooky feast of lollipops and red apples dressed along the tables. Visitors are invited to follow the Dark Mark trail [and] try their wand combat moves against Death Eaters in a live duel as they storm the Studio Tour, all before walking down a darker Platform 9 ¾ and a spookier Diagon Alley.

2022 will conclude with the return of the Yule Ball for Hogwarts in the Snow, running from Saturday 12th November [to] Sunday 15th January 2023. The festive makeover will see the Great Hall transformed with the icy silvers of the iconic Yule Ball scenes. The Gryffindor common room will be dressed for the season, and a blanket of filmmaking snow will cover the Forbidden Forest, Diagon Alley and the magnificent Hogwarts [C]astle model.