Five Changes in the “Potter” Films That Make the Story Better

It has become easy to criticize any changes that were made to the original Harry Potter stories when they were adapted to film over the years, especially when our expectations as Potter fans are so high. Where is Peeves? What happened to the deathday party? Why didn’t we get a Marauders story? The critiques can go on and on. However, there are some beautiful gems in the films that very much enhance the story. Here are our top five Harry Potter film additions.

The chapter “The Prince’s Tale” is a huge moment for Snape in the books. We see the complete agony when he deals with Lily’s death. But in the film, we see Snape personally witness Lily’s dead body at Godric’s Hollow. We see the comprehension when he recognizes Lily’s lifeless body in Harry’s nursery and the grief as he cradles her. Alan Rickman’s performance in this scene is palpable, making it easily the most emotional moment in the entire film series.

In the Goblet of Fire book, Dobby gives Harry Gillyweed to use in the Second Task. But in the film, Neville is the one to give Harry the idea the night before. This change made sense considering Neville thrives in Herbology class and would know which plant could help Harry breathe underwater. It was also a nice tie-in since the imposter Moody plays to Neville’s emotions with the ulterior motive of pushing Harry to the end of the tournament.

In Order of the Phoenix, there is also the absence of Dobby. But who else would tell Harry about the Room of Requirement? Of course – Neville! The film focuses on Neville distraught over the hold Umbridge has over the school, having just disbanded clubs. With this heavy on his mind, Neville is desperate to find a way that he can still learn spells to defend himself from the threats outside the castle. And then suddenly, a door appears, revealing a room where Dumbledore’s Army can learn defense. Later in the film, we see the fear on Neville’s face as he learns of the escape of Azkaban prisoners, all of whom are Death Eaters – one, in particular, being the woman who tortured Neville’s parents into insanity. Having Neville find the Room highlights the character’s motivations and further enhances his story arc as the one to eventually help bring down Voldemort. If not Dobby, what better character to make such a significant contribution?

In the Harry Potter and the Deathly Hallows book, we don’t exactly see Bellatrix Lestrange torture Hermione; we just hear it from the other room from Harry’s perspective. The screams leave the horrors up to the imagination of the reader. But the film had the freedom to play with this, and we’re so glad they did. In Harry Potter and the Deathly Hallows – Part 1, Bellatrix carves the word “Mudblood” crudely into Hermione’s arm with a knife. Considering Hermione’s blood status and Bellatrix’s deranged personality, it definitely seems like something that could have happened canonically. The unpredictability just adds to the terror – and it also shows that war leaves scars. 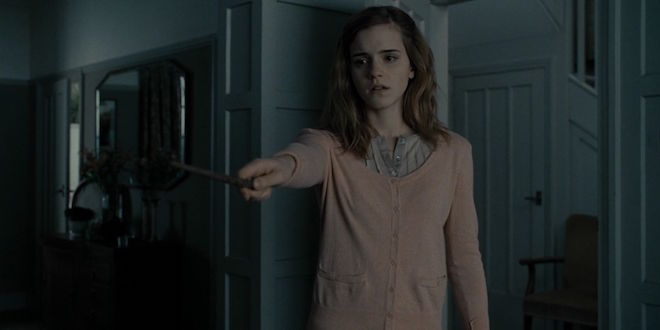 We can think of no better way to provide mounting anticipation for the story’s climax than by showing the trio preparing to leave for their Horcrux hunt. In the book, we hear about what Hermione has done to protect her parents. But again, the film has the freedom to show this firsthand. Hermione knows that her parents’ lives are in danger. The best way to protect them is to erase any memory that they even have a daughter. The music by Alexandre Desplat paired with the visual of Hermione disappearing from family photos is heartbreaking and a very powerful start to the end of the series.

We’re sure this scene made a lot of Harry/Hermione shippers happy. But for others, it’s just a lovely chance to see a lighthearted moment where Harry tries to cheer up Hermione. In the book, we know Hermione is upset that Ron left – Harry can hear Hermione crying from the top bunk at night. But in the film, we see Harry making a brotherly effort to make the most of a moment when the pair hear a song on the radio. This sweet moment of the two of them dancing shows the sibling-like bond they share. It is also a huge fan service to show the great chemistry between Dan and Emma.

Are there other additions to the films you enjoyed? Comment below.