In the United States, US Quidditch (USQ) and Major League Quidditch (MLQ) have begun the joint process of changing the name of the sport of Muggle quidditch and picking a new one.

Muggle quidditch was created in October 2005 at Middlebury College in Vermont by Xander Manshel and Alex Benepe and was inspired by Quidditch in the Harry Potter books. The sport has grown since then, expanding across the country and around the world. The exact number of teams currently is unknown, but it is guessed that there are nearly 600 teams in 40 countries. 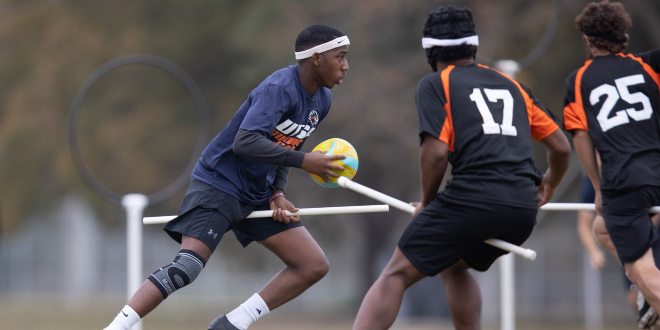 Both organizations, USQ and MLQ, will conduct surveys over the next few months that should help them with making decisions about the new name. The IQA isn’t part of this decision, and its opinion on the name change isn’t known yet. There is a possibility that the sport in the United States might have a different name than in the rest of the world. There is already one difference: In the United States, players play by the USQ rulebook and not by the IQA rulebook.

The main reason USQ and MLQ decided to start with the change is because J.K. Rowling, author of the Harry Potter book series, created controversy with her statements on the transgender community. That is a problem for Muggle quidditch, which is based on equality and inclusivity for all genders and has developed a reputation as one of the most progressive sports. (This is largely because of the sport’s gender maximum rule, where only four people of the same gender can be on the pitch at the same time.) The Muggle quidditch community also strongly supports the LGBTQIA+ community, and MLQ has started a tournament for cis and trans women, non-binary people, and trans men this year. 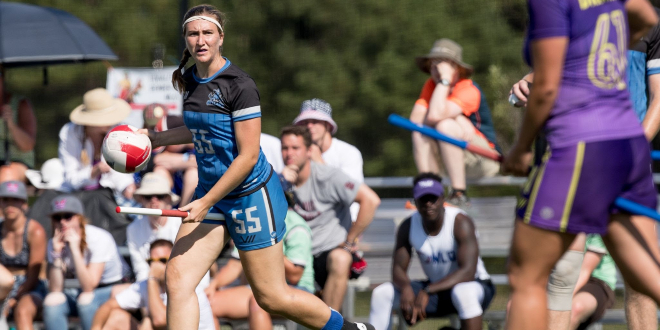 Changing the sport’s name might help it grow. After the change, there won’t be problems with copyright. This is also the opinion of USQ Executive Director Mary Kimball.

I believe quidditch is at a turning point. We can continue the status quo and stay relatively small, or we can make big moves and really propel this sport forward into its next phase.

USQ and MLQ need to seize opportunities for exposure in order to grow, and the name of the sport is currently limiting the range of possibilities.

USQ and MLQ hope that the initial survey process will be finished at the end of January 2022. After that, the new name will be announced. It will also depend on the feedback from the leagues’ legal teams.

New York (December 15, 2021) — The real-life sport inspired by the magical game of [Q]uidditch from the wizarding world of Harry Potter is changing its name.

US Quidditch, a governing body of the sport in the United States, and Major League Quidditch, a 16-team league that is the highest level of competitive play in North America, are beginning a joint process to rename the game. The two organizations will conduct a series of surveys over the next few months to guide them toward a decision regarding the new name.

The sport inspired by [Q]uidditch was originally adapted from the Harry Potter book series in 2005 at Middlebury College in Vermont by Xander Manshel and Alex Benepe. It has since exploded in popularity across the country and around the world. The game is now played by nearly 600 teams in 40 countries.

As the game has grown, it has developed a reputation as one of the most progressive sports in the world on gender equality and inclusivity. Matches are contested under a gender maximum rule, which stipulates that a team may not have more than four players of the same gender on the field at a time. The rule is written to ensure that women, trans and non-binary players can participate.

One of the reasons that US Quidditch and Major League Quidditch have decided to start the process of a name change is that J.K. Rowling, the author of the Harry Potter book series, has increasingly come under scrutiny for her anti-trans positions. LGBTQ+ advocacy groups like GLAAD and the Human Rights Campaign, as well as the three lead actors in the Harry Potter film series, have criticized her stances.

In addition, the sport inspired by [Q]uidditch is looking to continue to grow like other sports that have sprung from humble origins. The game commonly known as ["]ultimate frisbee["] is officially called ["]ultimate,["] in part because “Frisbee” is a registered trademark of the Wham-O toy company that invented the piece of equipment.

“I believe quidditch is at a turning point. We can continue the status quo and stay relatively small, or we can make big moves and really propel this sport forward into its next phase,” said USQ Executive Director Mary Kimball.

“USQ and MLQ need to seize opportunities for exposure in order to grow, and the name of the sport is currently limiting the range of possibilities,” said Major League Quidditch co-commissioner Amanda Dallas.

US Quidditch and Major League Quidditch plan to complete the process of surveying their members by the end of January. The announcement date of the new name is pending feedback from the leagues’ legal teams.

US Quidditch Cup 2022, the national championship for college and club teams, is scheduled to take place on April 23-24 in Salt Lake City. MLQ is announcing the finalists to host the 2022 MLQ Championship in January.