Castium Revelio: It’s All Happening in the DC Universe

Welcome to another edition of MuggleNet’s Casting News! After all of last week’s celebrations, this week we’ve got lots of news from Gotham City, with new posters and a brand-new trailer, as well as a possible new role for Robert Pattinson. Let’s dive straight in: Castium Revelio!

To kick off this week, we've got a new role for David Tennant (Barty Crouch Jr.). He's set to play General Kreig in a cartoon adaptation of Critical Role's Legend of Vox Machina. The show will be based on a web series of a Dungeons & Dragons campaign, with the original players returning to their roles. It will make its way to Amazon Prime Video on January 28, 2022. Before then, however, you can check out Critical Role's video announcing the latest stars who have joined the cast.

Speaking of new roles, Dame Emma Thompson (Professor Trelawney) has taken on a new character who doesn't have any lines. She's volunteered to play a detective in the second run of Whodunnit?, a show in which the lead actor is fitted with a microphone minutes before going on stage. Their lines are then read to them while they are on stage. Thompson will only be able to play this role once, with a different actor taking over every night. The show will be performed at the Play Theatre, London, between February 9 and March 12. Are you hoping to catch it?

Next up we've got an ad campaign featuring Dame Julie Walters (Molly Weasley). The campaign is for the suicide prevention charity Samaritans, and its aim is to dispel the myths about Blue Monday, which is supposedly the most difficult day of the year. The campaign reminds people that any day can be difficult but that there is always someone you can speak to about your feelings. You can watch the advert below.

Sticking with charity campaigns, Oliver Phelps (George Weasley) has been helping out Birmingham-based football club Aston Villa to support the NHS. The club's Aston Villa Foundation put together care packages filled with chocolates and wine and then handed them over to Phelps, one of the Foundation's ambassadors, to give out to those working at a local vaccination center. Here's a picture of him and the staff! 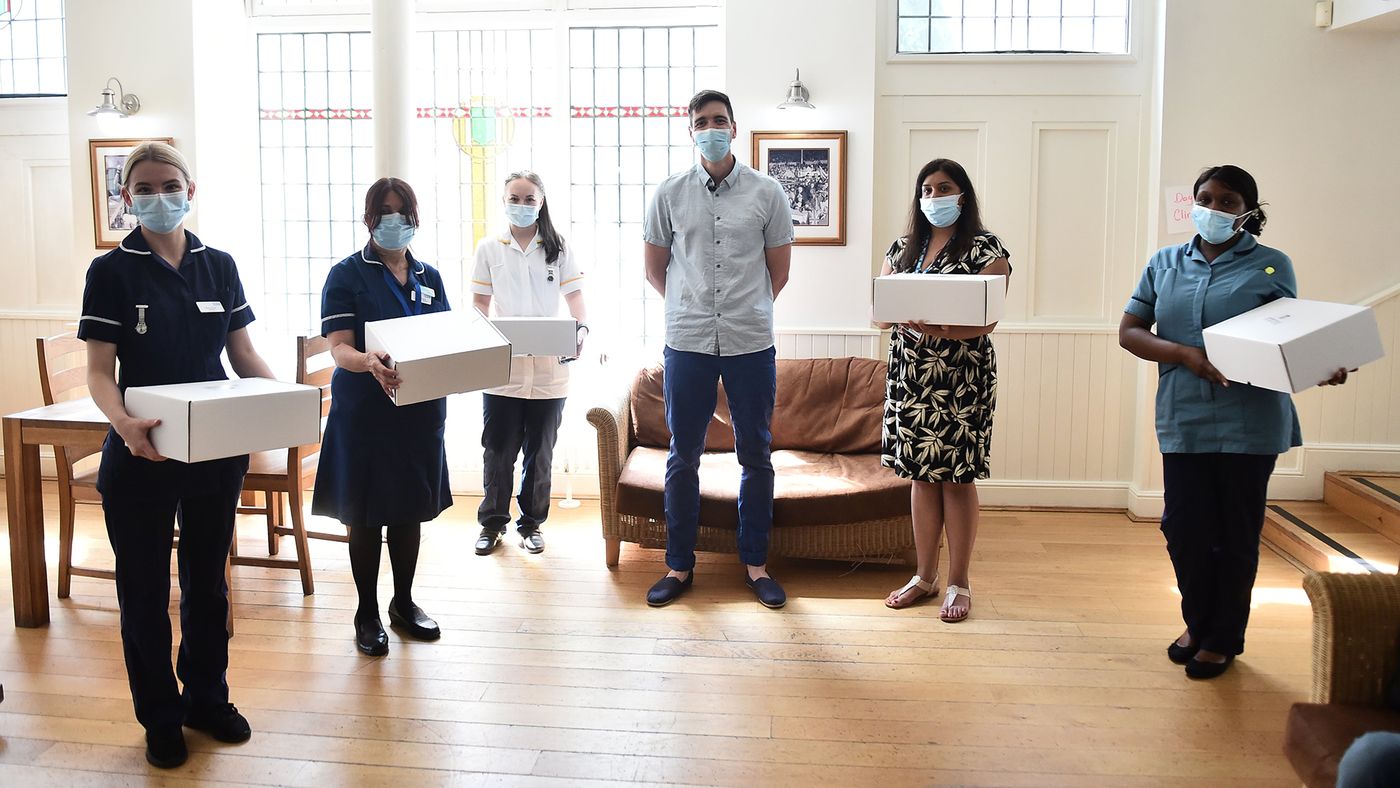 We've got a new project for Toby Jones (voice of Dobby) to tell you about next. He's starring alongside Olivia Colman (The Crown) and Michael Ward (The Old Guard) in Empire of Light. We don't know much about the film's plot, but it is supposedly a love story set around an old cinema. It's set for release next fall, but until then, we'll keep updating you with any information as it is released!

Luke Youngblood (Lee Jordan) also has a project coming up. He's set to make a guest appearance in Season 2 of Nickelodeon's animated series It's Pony. The show is about a young farm girl, Annie, and her horse, Pony. The series kicked off last Monday, but there are still 19 episodes to go if you want to check it out!

There are also new roles for Imelda Staunton (Professor Umbridge) and David Bradley (Argus Filch) to share with you. They've both joined the cast of Chicken Run: Dawn of the Nugget. The film is a follow-up to Aardman Animation's Chicken Run and will make its way exclusively to Netflix in 2023. A still from the film, which will use Aardman's well-known stop-motion style, has been released recently. Have a peek at it below! 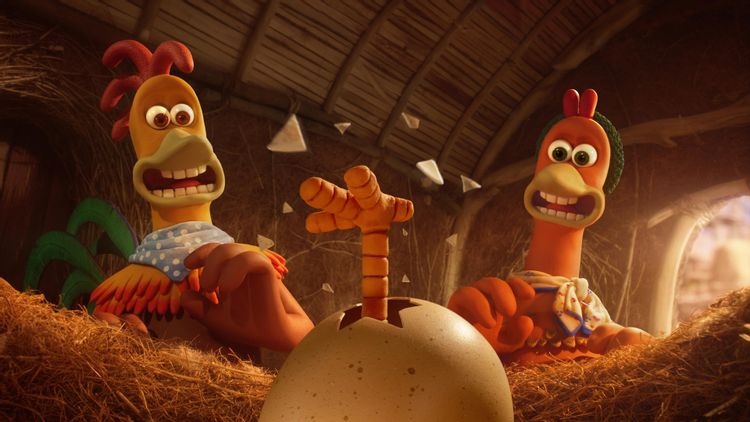 Jason Isaacs and Fantastic Beasts's Olafur Darri Olafsson (Lucius Malfoy and Skender, respectively) are set to work together on a visual retelling of Schubert's well-known piece Winterreise. A Winter's Journey is set in 1812 in Bavaria, Germany, and will follow a poet as he hikes across icy mountains. The film will incorporate both live-action and animation components. Filming will start in Poland in June.

Have you seen Ralph Fiennes (Lord Voldemort) and Rhys Ifans (Xenophilius Lovegood) inThe King's Man yet? If not, you'll be able to catch it from your sofas next month. It's coming to Hulu on February 18 and to Disney+ subscribers in the UK, Ireland, Japan, and South Korea on February 9. For Disney+ subscribers in a number of other territories, the date you'll have to look forward to is February 23, though in some countries, such as France, there's no information on if it will even make it to the streaming service.

We've got a clip of Chris Columbus's (director of Sorcerer's Stone and Chamber of Secrets) recent documentary to show you next. The Exiles is about Christine Choy, a Chinese-American filmmaker, activist, and former Black Panther Party member whose archival footage follows three key political figures. The documentary premiered at the Sundance Film Festival yesterday, but if you didn't manage to catch it, you can have a watch of the clip below!

We've got another new role for you next, this time for Robert Pattinson (Cedric Diggory). He's apparently in talks with Parasite director Bong Joon Ho to star in his next film. The film is currently unnamed but will apparently be based on Edward Ashton's yet-to-be-released book Mickey7. However, given Bong's previous work, we're not sure how his version could pan out. We'll keep you updated if we hear any more rumors!

We're sticking with Pattinson next, but we're going to be speaking about his alter ego this time. He's featured in new posters for The Batman with Zoe Kravitz (Leta Lestrange in Fantastic Beasts). One of the posters depicts both the Bat and the Cat, whereas the other is an extreme close-up picture of just Pattinson. There's also recently been another trailer released for the film, this time focussing mostly on the Riddler's taunts and teases.

He’s not Batman. He’s THE BATMAN.

It’s not a poster. It’s THE EXCLUSIVE poster. @mattreevesLA takes #TheBatman to another level, in theaters March 4. pic.twitter.com/pEMyAk6mkW

We can’t decide who we want to get our claws into more.

This is your EXCLUSIVE look at the Bat and the Cat. #TheBatman, in theaters March 4. pic.twitter.com/e9ilfGz5hD

From one superhero to another – we have more news about Freddie Stroma's (Cormac McClaggen) Vigilante. Episodes of Peacemaker are still being released weekly, but Stroma has been busy discussing what has happened in the episodes that have already debuted. He made a guest appearance on Podly: The Peacemaker Podcast this week, giving hosts Ify Nwadiwe and Fiona Nova a hand in breaking down the show's fourth and most recently released episode. You can watch the podcast below!

Keeping with the superhero theme, Ezra Miller's (Credence Barebone) the Flash is receiving a prequel comic series comprising three issues! It's called The Flash: The Fastest Man Alive, with the first issue being released on April 26, the second in May, and the final in June. Three-issue collections will be available a month before the film is released.

Our final new role this week is for Johnny Depp (Gellert Grindelwald in the first two Fantastic Beasts films). He'll star as King Louis XV in a currently unnamed movie by French filmmaker Maïwenn. The plot, characters, and even title are under incredibly tight wraps at the moment, but we do know that filming is set to begin this summer.

Derek Riddell (Torquil Travers) will return as Richard Cawood for the third and final season of Happy Valley. This season will focus largely on the discovery of some remains in the local reservoir. The investigation eventually leads back to an already well-known criminal in the town, Tommy Lee Royce. Filming began for the season earlier this week!

🎬 Filming has begun on #HappyValley series three, as new and returning cast members are announced.

Last up this week is a different type of job for Jack Thorne (cowriter of Cursed Child). He's been chosen for the judging panel of the National Campaign for the Arts's (NCA) Heart for the Arts Awards. The awards celebrate unsung heroes who put the arts above all else. He sits on the panel alongside businesswoman Deborah Meadon, news presenter Krishnan Guru-Murphy, and many others. Winners of the awards will be announced on February 14, and you can check out the shortlist here!

That’s a wrap on this week’s Casting News! Which of the new roles we’ve shared with you today are you anticipating seeing brought to life? Let us know in the comments below!